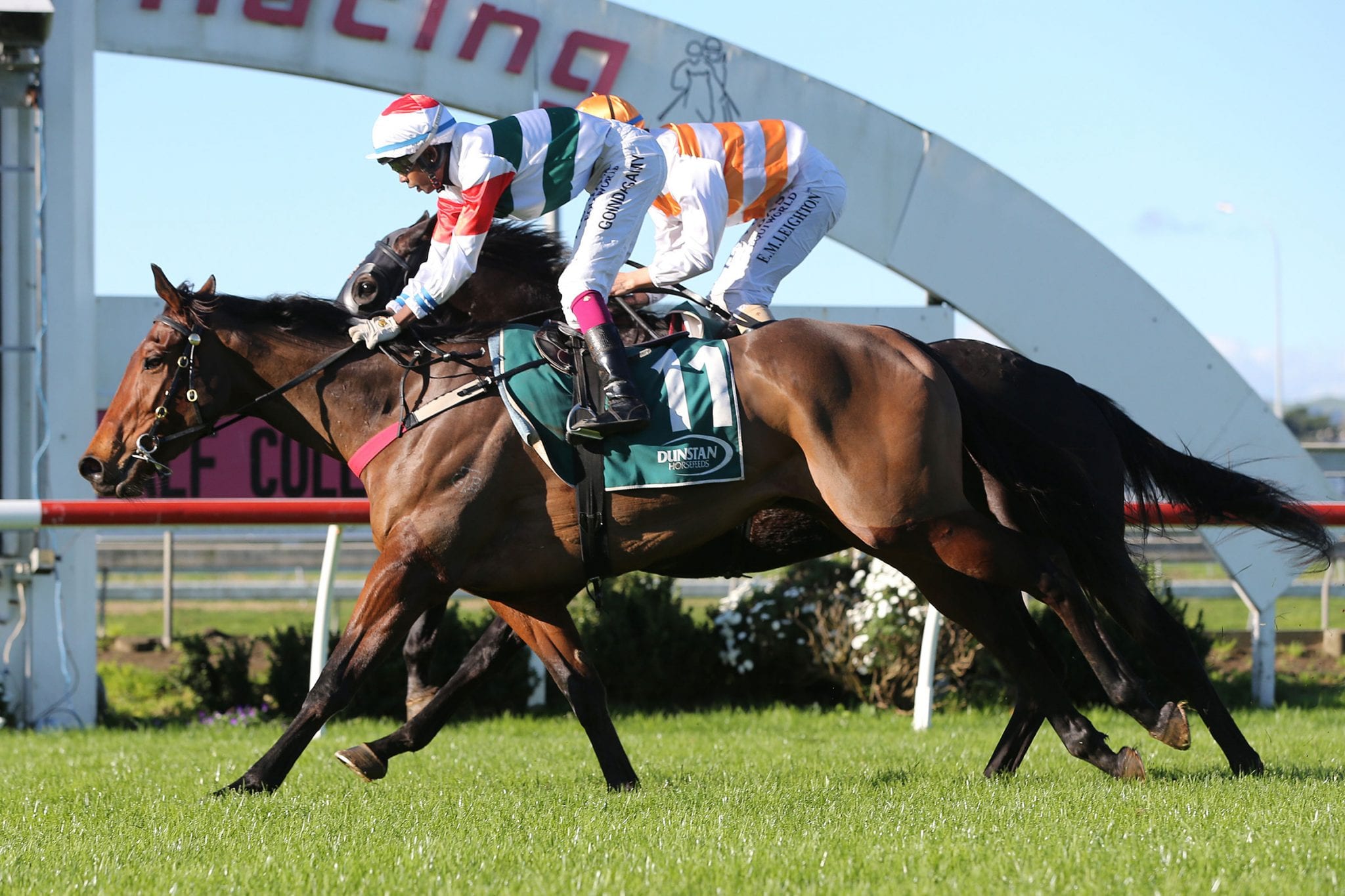 A filly who was no certainty to survive her first 24 hours of life is now a winner on the racetrack.

After a luckless eighth on debut at Avondale and a strong-finishing second at Ellerslie, New Zealand filly Bunkers made it third time lucky in Wednesday’s Alf Cole Memorial (1600m) at Pukekohe.

Ridden by Ashvin Goindasamy for trainers Peter and Dawn Williams, she rounded the home turn in third place before angling out wide on the track, reeling in the leaders and surging to victory by a neck.

The three-year-old became the first New Zealand winner for the Australian owner-breeder partnership of Daniel Gangi, Simon Bilalis and assorted family and friends.

“Although it was only a maiden win, it meant a lot more than that to us,” Gangi said. “It seems like she’s a filly with a fair bit of ability. She had a lot of bad luck in her first start, then just missed in her second race, and now she’s picked up a good win at her third start. It’s exciting.”

Adding to that excitement is the filly’s remarkable backstory. By top-class racehorse and promising sire Kermadec out of a well-related Encosta de Lago mare, Bunkers was born in inauspicious circumstances at Waikato Stud in November of 2017.

“We had the mare at Waikato Stud and I knew she was due to foal,” Gangi recalled. “I got a sinking feeling when Mark Chittick texted me and said, ‘Give me a call.’ I knew it wasn’t going to be good news.

“So I called Mark, and he told me the foal was a shocker. He said he was going to send me some photos, but warned me to make sure I was ready before I looked at them.

“It was just a train wreck. It was so bad that it seemed like she might not even be able to support herself at all, and she’d have to be put down. But I just wanted to give her 24 hours and see how she was.

“Waikato’s vet, Chris (Phillips), put some splints on and did some great work in those early stages. Probably 48 hours later, he told me, ‘You may not ever have a racehorse here, but she’ll be okay. She can hobble along through life and probably make a broodmare for you a bit further down the track.’

“After that we just gave her so much time, and eventually she completely came good, and she got to the point where we were able to try breaking her in.

“Paul came back to us and said she was a nice horse and we should start thinking about sending her to a trainer.

“When I came over for the Karaka sales, I asked around for a few suggestions – I asked people like Peter Moody and quite a few others. The names that kept coming up were Peter and Dawn Williams. I’d never heard of them at that time, but we decided to go with that recommendation, and now here we are.

“It’s been a long journey over these three and a half years. Unlike some people, we don’t have the deep pockets to be able to keep things going all that easily. But we wanted to do the right thing with this filly and just give her a chance. Sometimes, when you do the right thing, it comes back around and pays off for you in the end.”

Bunkers became the fourth winner for her dam Inscrutable, who became a special broodmare for the Gangi-Bilalis team.

“She’s the first mare we ever bought together, my family and Simon,” Gangi said. “We’re good friends and decided to go halves.

“We bought the mare in 2014 when she was in foal to Reset, and she had a colt (later named Push Pause) who became a winner.

“We sent her back to Reset and got a filly, Jennevee, who actually won a race at Ballarat on Sunday. So that’s two winners in a week for the mare.

“Then we had this Kermadec filly, who we’re obviously going to keep, and then we sent her to Tivaci and got another filly. Kerrie Cox bought her at Karaka and sent her to Jamie Richards, where she hasn’t won a race yet but was close up in a stakes race this season.”

Bought for $50,000 at Karaka last year and named Craving, the filly finished third and fourth in her first two starts before a commendable fifth in the Group 2 Matamata Breeders’ Stakes (1200m) in February.

Inscrutable was later sold to Gamble Bloodstock, who sent her to Cambridge Stud stallion Embellish.

Meanwhile, Bunkers was one of two winners at Pukekohe on Wednesday for the Williams team, who closed out the day with an emphatic victory by Timberlake in the Clive Bennett Farewell (1600m).

The double delivered a timely boost for Peter Williams, who is recuperating from surgery.

“I’ve just recently had a couple of knees replaced,” he said. “The recovery is coming along okay. I’m getting around slowly, but getting there.

“The two wins at Pukekohe yesterday were a great boost, and I think they’re both nice horses in the making.

“Bunkers won really well. She’s a promising staying sort of filly, and I think she’s going to be even better with another six months under her belt.”