Promising 3YO getting a Grip on things 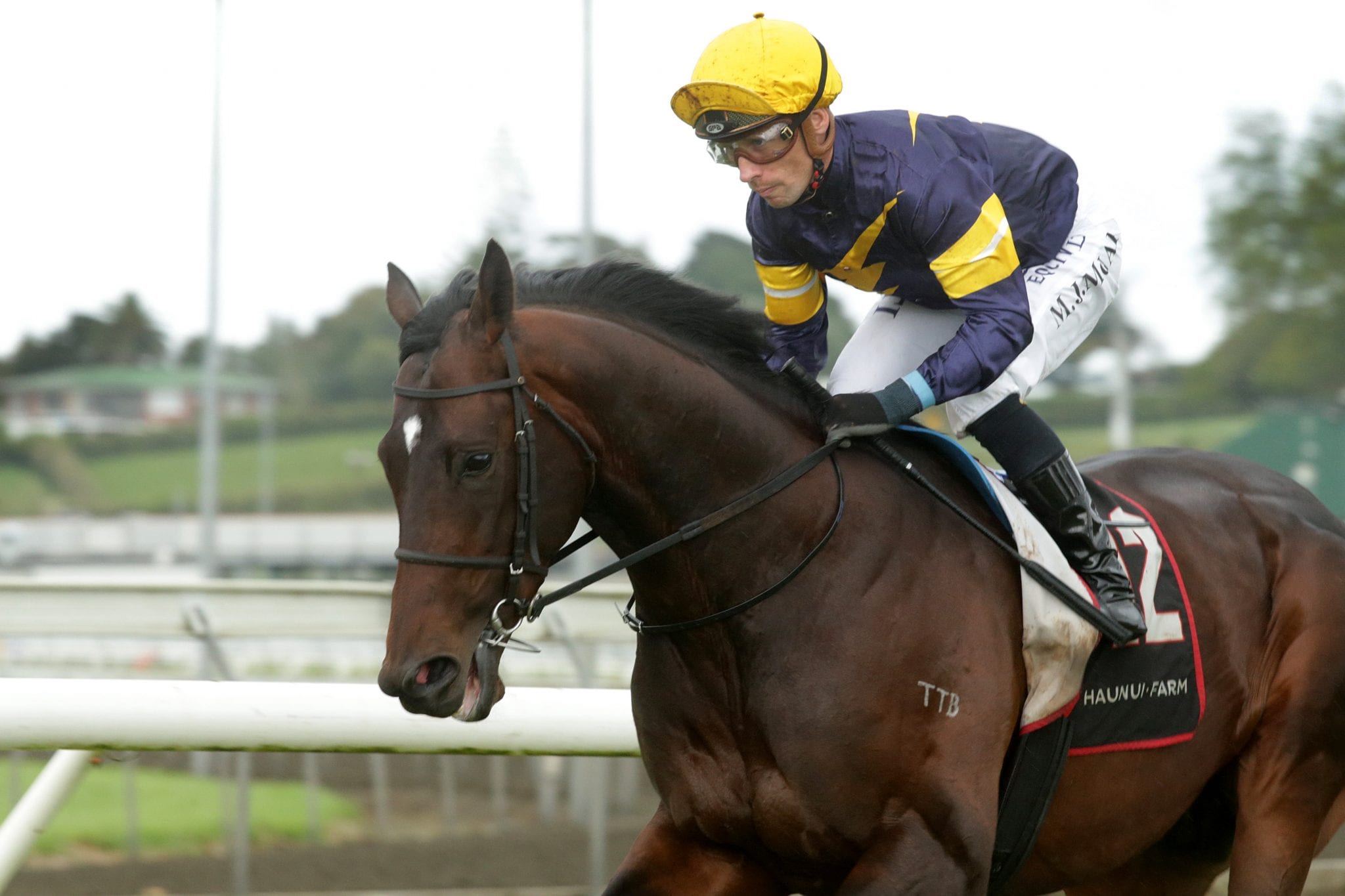 Ballymore Stables have a big rap on three-year-old colt Grip and they are hoping he can show his class at Ellerslie on Saturday when he lines-up in the Listed Trevor Eagle Memorial 3YO (1500m). The Exopshere colt recorded his maiden victory at Pukekohe last start and Pam Gerard, who trains in partnership with Michael Moroney, believes he will be very competitive in his first stakes assignment.

“We are pretty happy with him and he has shown us he has got some potential,” she said. “He pretty much did it (last start win) on natural ability. He is still quite green, he has a lot to learn, but he did it easy enough. He probably got lost out in front when he got there a bit too soon. It was a good effort.”

Grip has drawn barrier 13 for Saturday and Gerard said that is an ideal gate for him. “It’s not the worst place for him,” she said. “He likes to get back and run home. Even if he is three-wide with cover midfield, that’s not a bad place for him.”

Purchased out of Bradbury Park’s 2019 New Zealand Bloodstock Book 1 Yearling Sale draft for $100,000, Grip is on a path towards the Group 1 New Zealand Derby (2400m) and his connections are yet to decide his lead-up races. “We will see how we go tomorrow,” Gerard said. “There’s the Levin Classic (Group 1, 1600m) and the Karaka Mile ($1 million, 1600m). It’s a little bit hard to do both we have found. “We will just take it race-by-race with the Derby in-mind at the end.”

Grip carries the colours of prominent Australian owner Rupert Legh, and a trip across the Tasman to join Moroney’s Flemington barn is likely if he continues to improve through his Classic season. “He will stay here and go through to the Derby, that’s what we bought him for,” Gerard said. “Once our three-year-old season runs out he will probably head over to Australia if he shows enough.”

Grip will be joined in Saturday’s three-year-old feature by last-start winner Fleetwood Maca. The daughter of Rock ‘n’ Pop has continued to impress Gerard who said she will take a lot of improvement out of Saturday’s race. “She is quite a progressive filly, she just keeps improving all the time,” Gerard said.

“She really stepped up in class, although her first start was against some smart horses and she performed really well. “It was a very tough win last start, she just never stops fighting. “She is quite an interesting filly with a lot of upside to her. Once she gets out over a longer trip she will improve further. “She is another one who we will take race-by-race. She can still get a little hot at times, but she is handling it all pretty well at the moment.”

Earlier on the card, stablemate Dragon’s Kiss will be one of a dozen debutants to contest the Eagle Charters 1100. “She is quite a nice filly, she does everything you ask of her,” Gerard said. “It has come up a tough field but I am just keen to give her a look around Ellerslie. “She has got a nice draw (3). It will be good to get a line on her tomorrow and she will take some improvement out of the run.”

Iridessa will complete the quartet of Ballymore contenders when she lines-up in the Dunstan Feeds Stayers Championship Qualifier 2200. “Iridessa has been going some very nice races without being able to quite top it off,” Gerard said. “She will be a bit fitter than what she was last start. She had a pretty tough run. She is a really nice staying type of mare and she is just getting better every time.”

Meanwhile, Group 3 performer Tokorangi has been enjoying some R&R after her fifth-placing in the Group 1 New Zealand 1000 Guineas (1600m) at Riccarton earlier this month. “She travelled back from Christchurch really well,” Gerard said. “She has got a paddock full of grass and some mates, she is enjoying a little bit of downtime. “She will probably come in next week and look to some of the nicer races at Christmas time.”

The Group 1 New Zealand Oaks (2400m) remains a logical target for Tokorangi, although an Australian campaign could be on the cards if her trainers don’t believe she will get the Oaks distance. “It looks like she is going to get that way (2400m),” Gerards said. “But at any time if we think she is not going to be able to stretch that far then she will probably pop across the ditch. “At this stage we have got some nice races at Ellerslie and we have got plenty of options here for three-year-old fillies.”

While looking forward to the weekend’s racing, there was a tinge of sadness for the stable earlier in the week when they farewelled owner Barry Neville-White. The former Auckland Racing Club chairman’s funeral service was held on Monday where he was fondly remembered by friends and family.

Neville-White played an instrumental role in Ballymore Stables’ history, helping co-trainer Moroney establish his Melbourne base. “Barry has been a huge supporter of Mike’s right from the word go,” Gerard said. “I was talking to Mike, and Barry was the one who got him into Flemington when he first wanted to go over there. “He has been a great owner for us, and he was such a lovely guy. He was such a gentleman to talk with over the phone and loved having a chat. “There have been a lot of trainers out there that he has supported. He will be sorely missed.”