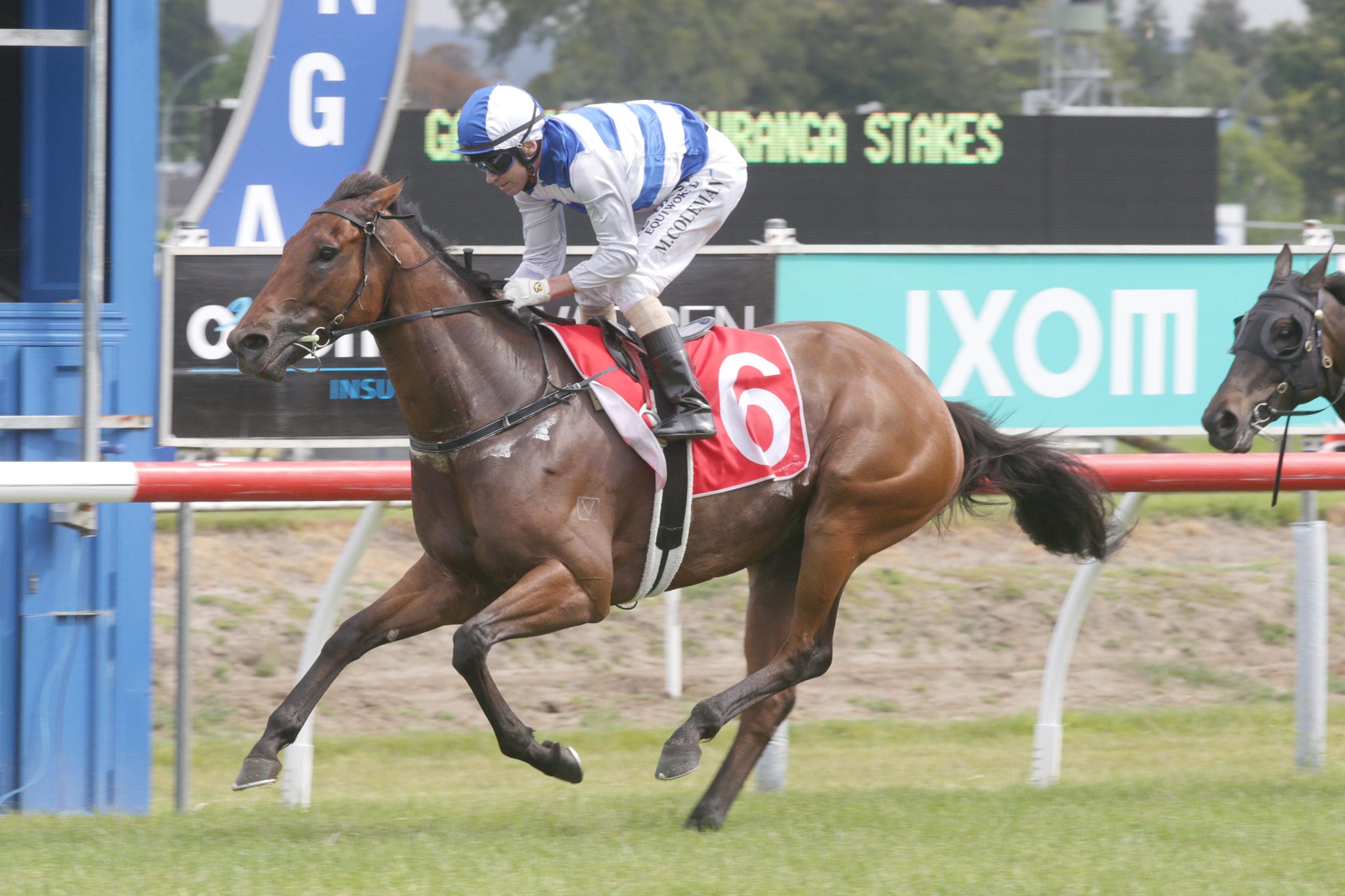 Ken and Bev Kelso are happy with Princess Kereru, their Matamata stable’s sole Group 1 candidate at the Ellerslie Christmas-New Year Carnival after a leg injury ruled out the stable star Supera.

Princess Kereru has been living in the shadow of Supera leading up to the two-day carnival, with Supera the early dominant TAB Fixed Odds betting favourite for the Group 1 Cambridge Stud Zabeel Classic (2000m) on Thursday. But now the Matamata couple’s hopes of Group 1 glory rest with Princess Kereru as the Pins mare attempts to avenge her defeat of 12 months ago in the Group 1 Sistema Railway (1200m) on New Year’s Day.

Supera suffered a cut to a hind leg when being unloaded after trackwork on Saturday morning, turning Ken Kelso’s beaming smile after her gallop into a concerned frown within seconds when talking with Gary Cossey, racing manager for her owner-breeder, Sir Peter Vela. “She worked sensationally on Saturday morning and I was on the phone to Gary telling him how well she had gone when my call was interrupted by another call, from Jilly (Cook, a senior member of the Kelso staff), telling me she needed a vet,” Kelso said. “Supera had panicked coming off the float and she went over one side of the ramp and cut her leg.

“She’s not easy. In fact, she can be very difficult and at times she charges off the float.” The injured leg required stitches and Supera will be on the easy list until she fully recovers, meaning she is also likely to miss the Group 1 Herbie Dyke Stakes (2000m) at Te Rapa on February 8. “We don’t know how long it will take to come right,” Kelso said. “It looked good on Monday morning when we took the bandages off (to inspect the cut), but we’ll know more in a week. “I don’t think she’ll get to the Herbie Dyke, but it’s not the end of the world.”

The longer-term options could include a return to Te Aroha on April 4 for the Group 1 New Zealand Thoroughbred Breeders’ Stakes (1600m), in which the Savabeel mare finished a close and unlucky second to Nicoletta last season. Supera was to be ridden in the Zabeel Classic by James McDonald, but her withdrawal has resulted in the champion jockey switching to True Enough, who was one of his three winners during his flying visit to ride at Te Aroha last January.

Though naturally very disappointed over Supera’s setback, Kelso is looking forward to Princess Kereru tackling the Sistema Railway again after splitting Santa Monica and champion mare Melody Belle when a neck second last term. “She had a gallop between races with Avantage at Matamata last week and they broke a minute for the 1000m, which was good going on a rain-affected track,” Kelso said. “She’s done well since Counties and we couldn’t be happier with her.”

Princess Kereru flashed home for third in the Group 2 Auckland Thoroughbred Breeders’ Stakes (1400m) at the Counties meeting on November 23, following on from a similar fast-finishing effort fresh-up when second to Dawn Patrol in the Group 3 Sweynesse Stakes (1215m) at Rotorua five weeks earlier.

Princess Kereru also holds a nomination for the Group 1 J.R. & N. Berkett Telegraph (1200m) at Trentham on January 18, but is no certainty to take her place in the field. “There’s also the Westbury Classic (Group 2, 1400m) on Karaka Millions night at Ellerslie on January 25 so she might run in that,” Kelso said. “We’ll make our minds up after the Railway.”

The Kelsos will have one other runner at the upcoming Ellerslie carnival with Penteverest starting in the Dunstan Feeds 1500m Championship Final on Thursday. “He disappointed at Matamata last start (when 12th over 1600m) and I don’t know what went wrong,” Kelso said. “He went well leading up to it and we know he’s far better than that.”

Two days later the Matamata trainers will be represented on their home track with Levante and Limentis, a couple of promising up-and-comers. Levante, a three-year-old daughter of Proisir, impressed when winning her debut at Matamata earlier this month over 1100m after being placed third in her two 800m trials and is sure to have a strong following on Saturday. “She surprised us a bit the way she won,” Kelso said. “She had trialled well enough to be competitive and if she finished in the first four we would have been happy.”

Levante settled last and was still back and being held up until 100m from the finish. Once into the clear she charged between runners to not only win, but do so going away by a length and a half. “She looked good, but we’ll find out how good she is on Saturday,” Kelso said. “It’s a good field and a step up for her.”

Limentis, a Swiss Ace four-year-old mare, also flashed home at the same Matamata meeting after being held up entering the home straight when second in a maiden 1400m and Kelso rates her a good chance in Saturday’s maiden 1200m assignment. She had won her two trials and preceded her Matamata effort with a useful fifth over 1200m at Te Aroha last month.