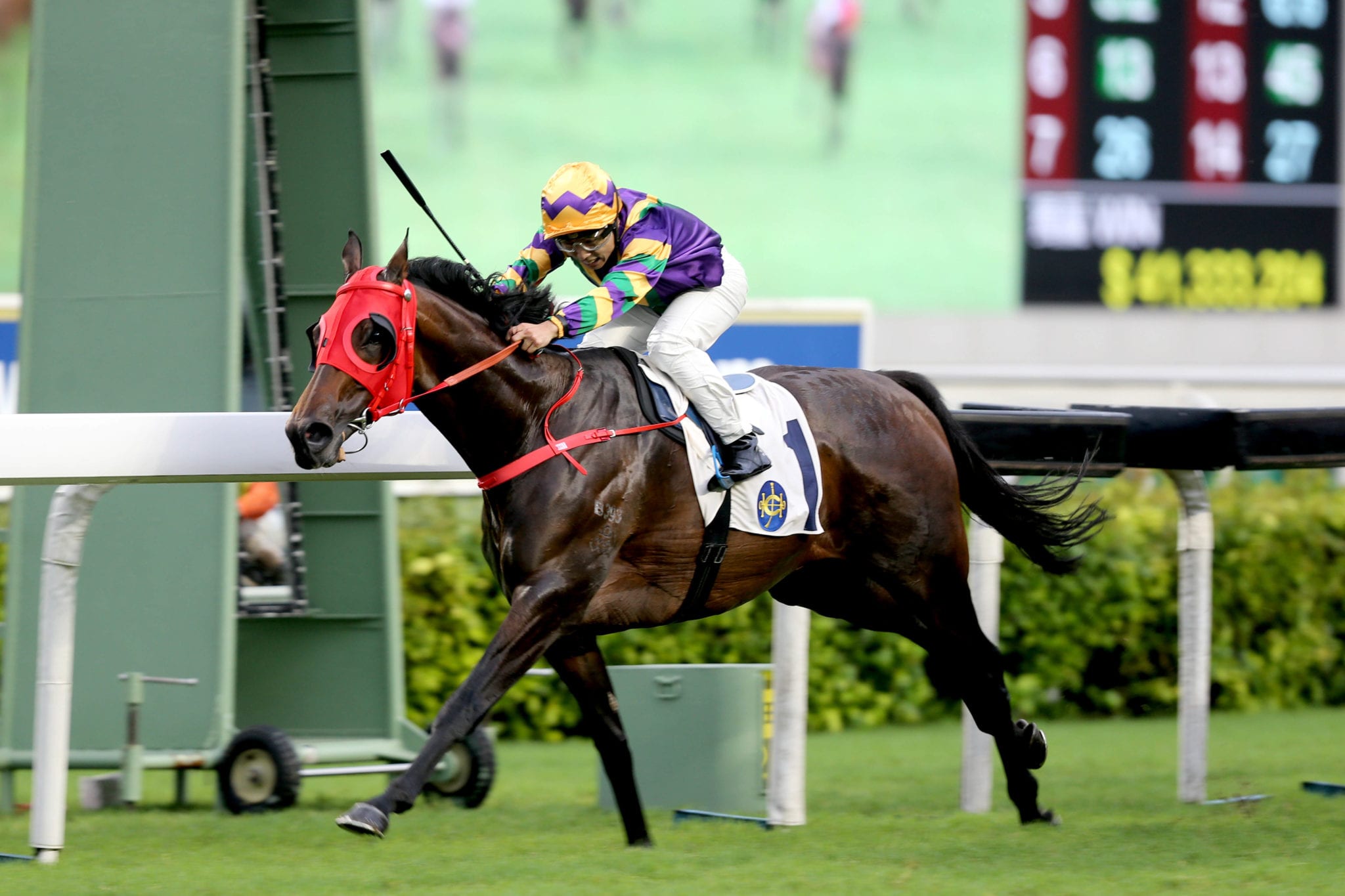 Matthew Poon illuminated a rain-drenched Sunday (7 June) at Sha Tin with a four-timer capped by victory aboard the courageous Perfect Match in the Class 2 Butterfly Handicap (1400m).

The Danny Shum-trained Perfect Match defied a 130lb burden to gallop with resolute heart through yielding ground and claim the afternoon’s finale by half a length from the fast-closing Mongolian King (126lb).

“I didn’t expect this; I didn’t expect four winners today,” Poon said. “The rain we had meant that conditions must have suited my horses and they were able to perform, so I had all the benefits – I’m very happy and lucky!

“Perfect Match was brave but in the last 200 metres I wasn’t too confident because he carried top-weight; he had worked hard early because other horses made the pace strong so I thought he might tire. I was careful not to hit him too early and he showed he was fit and tough enough. Danny Shum put him in a turf gallop and that just put him spot on and made the thing happen.”

The rider bookended the action: he teed up the quartet with a success in race one, the Class 5 Wu King Handicap (1200m), aboard Great Son for trainer Paul O’Sullivan.

“Great Son had a perfect run,” Poon said, “he was just behind the fast pace and travelled comfortably so he was able to give me a little kick.”

Between times, Poon was on the mark with the Ricky Yiu-trained Mighty Valor, followed by the Jimmy Ting-trained Hello Daddy in the Class 3 On Ting Handicap (1600m) – the New Zealand import, winner of the Group 2 Waikato Guineas (2000m) last year, opened his Hong Kong account at the seventh attempt.

Poon’s four-timer was his second in Hong Kong and first at the big track, having achieved the feat at Happy Valley on 13 September, 2017.

Poon had the luxury of enjoying an eased-down cruise past the post on Mighty Valor in section two of the Class 4 Po Tin Handicap (1200m), a success that gave the long-time premiership leader Yiu a welcome five-win cushion over his nearest rival, Francis Lui.

Yiu knows every victory is precious at the tail end of any Hong Kong season but when a championship is on the line, those victories are priceless. With 10 of 87 race meetings still to get through, keeping the athletes fresh and happy is as paramount as fitness and placement.

Yiu had the foresight to give Mighty Valor a break after the maiden’s form faded out in mid-February, sending his charge to the Hong Kong Jockey Club’s facility at Conghua in late March before returning the gelding to Sha Tin earlier this week, primed to go again.

“He’s really benefitted from his time in Conghua,” Yiu said. “He’s more settled, he’s healthier – you can see in the sheen of his coat – overall, he’s much more relaxed now.”

And the handler is hoping his charge will give further aid to his cause before the season ends on 15 July.

“We’ll run him again at the same distance – today I took the blinkers off because he’d been showing me he had enough speed,” he added.

Such was Mighty Valor’s dominance that Poon dropped his handful of rein low on the three-year-old’s neck through a free-wheeling final 50 metres.

“He trialled very well on the dirt in Conghua and I think since he’s had a rest he’s come back fitter and he was able to handle the wet conditions, so that’s why it looked so easy,” Poon said.

The crowning victory came in the Class 3 Fu Tai Handicap (1000), with Chan urging the Shum-trained Baltic Whisper stand-side through the rain to hold off the Joao Moreira-ridden favourite War Of Courage by a short-head.

“That feels good – absolutely,” Chan said. “I galloped him the other day and I said to Danny that he worked much better than when I rode him earlier this season. The weather and the track conditions affected a lot today but he enjoyed it.”

The rider, now 16 months into his Hong Kong career, had already posted three doubles this season, the latest only a week ago.

“The important thing for me is that now we’re at the end of the season, my seven-pound claim is really helping the horses,” he said. “I’m progressing slightly and gradually, just getting better and learning all the time.”

And it was so close to being a Poon-matching four wins but for Mister Monte’s narrow second to Great Smart in race four.

“I was beaten by a short-head – I was a little bit angry about it but I couldn’t help the draw (13). Racing is racing and one day you beat the others and another day they beat you,” he said.

The apprentice’s first win helped John Moore edge closer to contention for the trainers’ championship as Magic Supreme improved the handler’s haul to 51 wins, seven off the top spot and just one behind third-positioned Tony Cruz. Chan guided the four-year-old to a maiden score in section one of the Class 4 Po Tin Handicap (1200m).

He then teamed with a horse he knows well, Care Free Prince. The Manfred Man-trained seven-year-old was Chan’s first Hong Kong winner, back on 7 April last year, and the rider made no mistake when hurrying to the fore from gate 12 and driving to victory in the Class 4 Sam Shing Handicap (1400m).

Man took his tally to 29 with his sixth double of the campaign: Great Smart, ridden by Matthew Chadwick, got his head down to deny Mister Monte in the Class 5 Yau Oi Handicap (1800m).

Moreira started the day five behind Zac Purton in the jockeys’ title race but closed the gap and ended a run of 26 races without a win when the John Size-trained Leap Of Faith won the Class 4 Tai Hing Handicap (1600m).

Benno Yung saddled a +28300 winner at Happy Valley on Wednesday night and the trainer welcomed a +1200 success thanks to Win Win living up to his name again after four consecutive double-digit finishes. Brazilian rider Vagner Borges pushed the four-year-old a length and a half clear in the Class 3 Lung Yat Handicap (1400m).