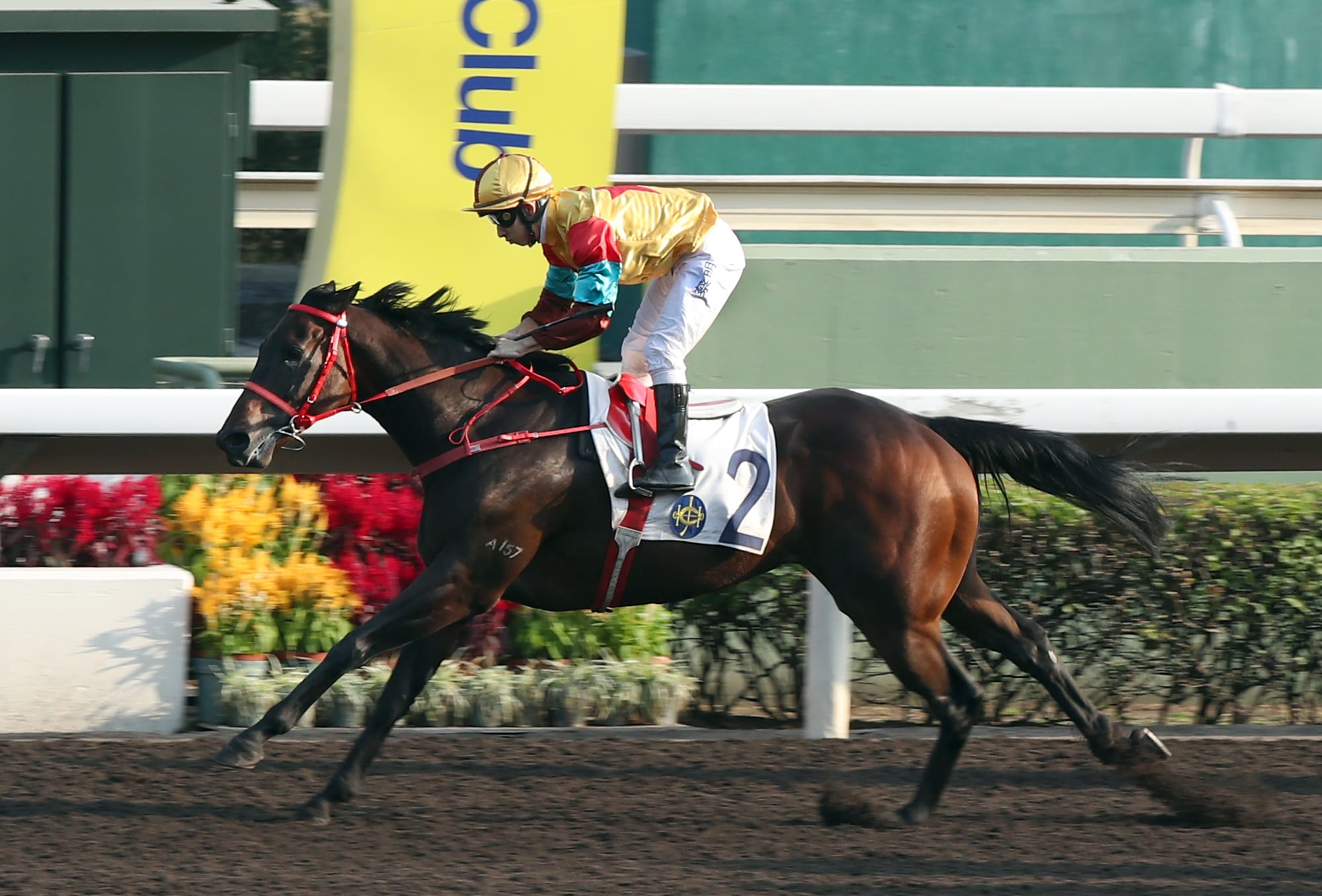 Manfred Man believes Big Time Baby is on the right track to book a ticket to Dubai at the end of March but it’s a case of one step at a time for the six-year-old who would move one stride closer with a smart run in the Class 2 Cha Kwo Ling Handicap (1200m, dirt) at Sha Tin on Wednesday (19 February) night.

“If he runs well then we’ll look at if he can go – I would go with the horse, if he’s invited of course, why not? But first let’s see how he goes tomorrow night,” Man said.

Big Time Baby (133lb) has surged to a career-high rating of 103 this season, scaling 16 points in his last five starts thanks to two wins on the dirt as well as a last-start runner-up effort behind Big Party in the Group 3 Bauhinia Sprint Trophy (1000m) on turf.

“Everything is fine with the horse, I am happy with him going into tomorrow night’s race,” Man said.

With that consistency coming to the fore, Man promptly entered the Irish-bred gelding for the Group 1 Dubai Golden Shaheen (1200m, dirt) at Meydan Racecourse on 28 March. The trainer previously saddled his star sprinter Eagle Regiment for a gallant third in the 2013 Group 1 Al Quoz Sprint (1000m) at Meydan.

“Eagle Regiment – he had no luck, he always had an issue with his shoes, they used to hurt his foot and he had that problem in Dubai but he still ran very well, he came third,” Man said.

As well as his game Dubai placing, Eagle Regiment was withdrawn from the 2012 Al Quoz Sprint due to his feet issues, but Man did nurse the injury-plagued speedster to back-to-back HK Group 1 Centenary Sprint Cup (1000m) wins in 2012 and 2013.

“If Big Time Baby can go, my stable would be happy,” he said. “Tomorrow is not necessarily a test for him but it’s the only race suitable for him then if he does run well, Dubai is more of a chance.”

Regular race-rider Matthew Chadwick will be in the plate for tomorrow night’s test, having partnered the gelding to both of his dirt wins this term.

“It’s very early days in regards to travelling overseas – we’ll take it one race at a time but he’s got a big heart, he’s very consistent and he’s also come back much better this season – he’s more relaxed and mentally more mature,” Chadwick said.

“I’ve only been to Dubai once – it’s something I would definitely look forward to and I hope that I would be on the ride with him, but we’ll take it one race at a time and if he comes with his best tomorrow then I don’t see why he couldn’t take it out.”

Trained by Tom Dascombe pre-import, Big Time Baby arrived in Hong Kong off the back of a five-start career in Great Britain, which culminated with a win in the Listed Roses Stakes (1000m) at York.

“He’s a very consistent horse, he’s performed well on the turf as well but he is better on the dirt: he definitely does find a few more lengths as he just likes that little bit more give in the ground because he’s able to stride through it a bit better, rather than running on top of it,” Chadwick said.

The Dandy Man gelding is now a four-time winner on the dirt and also boasts an impressive runner-up effort to Aethero at Class 2 level this term, a race in which that galloper managed to lower Sacred Kingdom’s long-standing 1000m Sha Tin track record to 54.69s.

“He’s got a bit of a quality which helps and he’s one horse I always look forward to riding. The owners have been very good to me and kept me on, so it’s nice to stick with them and to be able to have that feeling going into the races,” Chadwick continued.

The jockey, though, hinted at a slight concern with the prospect of carrying 133lb against the field.

“It’s an interesting race on paper,” he said. “I think the weight is the biggest negative but still he has the ability and I have confidence in my fella – he’s working well, Manfred (Man) has him going well, he’s made sure he is freshened up for this fit so he should be going into this race nicely prepped.”

The six-year-old gelding faces 11 opponents in tomorrow night’s six-furlong dash, including six-time course and distance winner Ugly Warrior (125lb), who has struggled to recapture his best form following a run in the KOR Group 1 Korea Sprint (1200m, sand) in Seoul.

“He’s happy since he’s returned from Korea, after a few races his condition has returned and he’s found himself now,” trainer Me Tsui said, adding, “No more blinkers, I think they made him a little bit nervous but he trialled well last week and I am happy with him.”

Grant van Niekerk will be in the plate for the first time at the races and the 28-year-old remained optimistic about the galloper’s chances of sparking a return to form.

“His trial was really good with me, he’s a horse that’s pretty good on the all-weather track – so if he can find his previous form on the track he’ll be very competitive,” Van Niekerk said.

“He just has to find a little bit of his old form back to be competitive – he’s beaten some really good horses before and quite comfortably, so I’m excited about riding him.”

Also in the field are California Whip (128lb), Gunnison (122lb), Elite Patch (113lb) and Encore Boy (119lb). The last-named, like Big Time Baby, is a two-time course and distance winner this campaign.

“Encore Boy is going well, he’s done well in Conghua, he’s held his form; the wide draw makes things difficult but he’ll run well because I feel he is half a class better on the dirt than the turf,” said championship leading trainer Ricky Yiu.