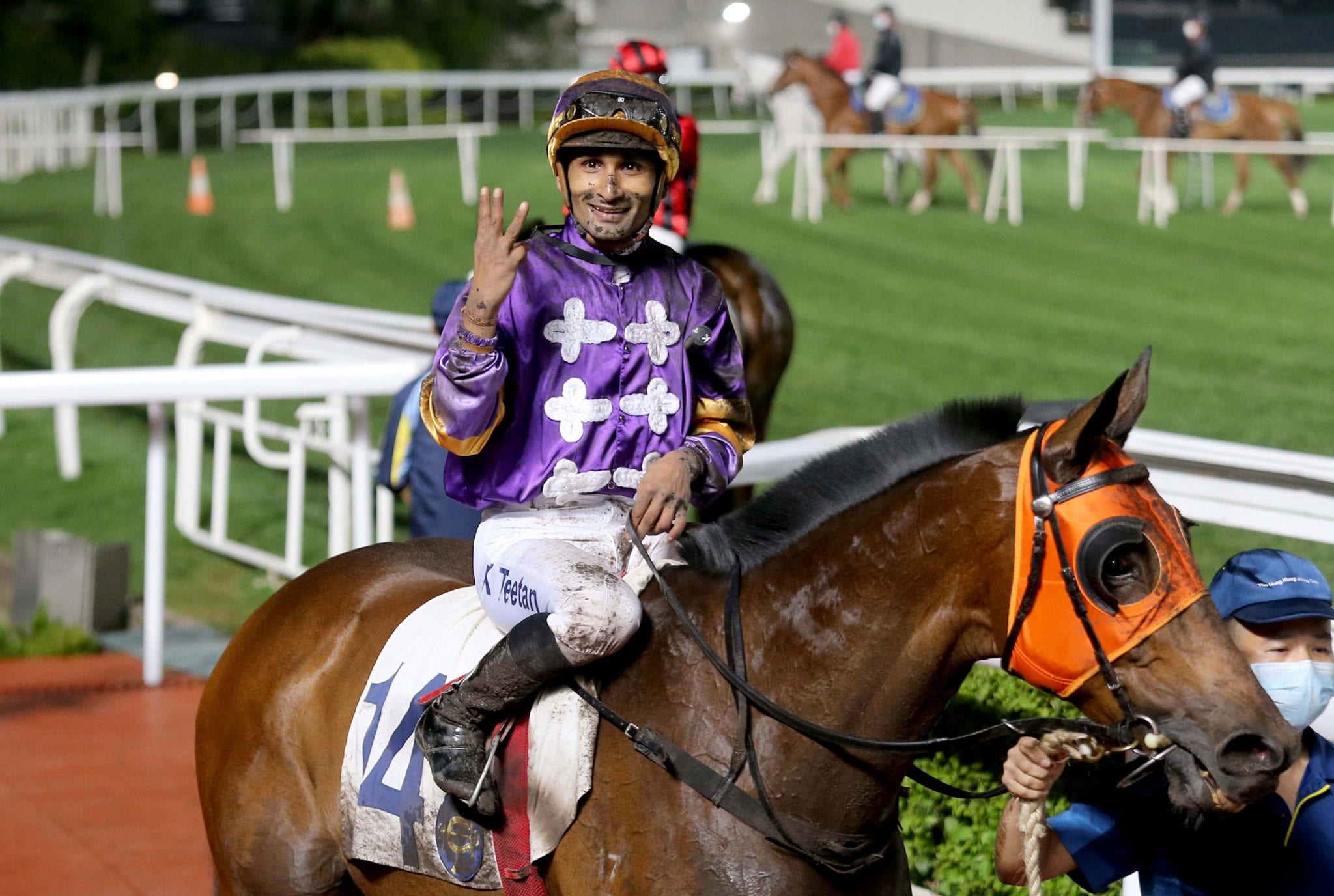 It was a night for late-closers and Mongolian King maintained that trend to the last with a powerful late charge in the final race at Sha Tin on Wednesday (1 April) that sealed a worthy treble for jockey Karis Teetan.

With Joao Moreira and Zac Purton perennially locked into the top two spots in the Hong Kong premiership, Teetan has made third-place his own in the past two seasons. But the Mauritian has a fight on his hands to hold that position for a third term with Vincent Ho breathing down his neck and Grant van Niekerk threatening to join the fray.

Teetan helped his cause tonight, taking his tally to 53, seven ahead of Ho who picked up one win on the eight-race card with the blank-drawing Van Niekerk on 37 wins.

“It’s nice to be third behind those two top jockeys (Moreira and Purton) – it’s not easy to get close to them and I still have a lot to learn but with the rides I’m getting I’m trying to get as many winners as I can,” Teetan said.

“Vincent has been doing very well this season, he keeps creeping closer but the treble today should help me. I just want to keep the ball rolling now and keep it going for a good few months.”

Derek Leung aboard Kings Shield (125lb) looked to have the Class 2 Cheung Sha Handicap (1650m) in the palm of his hand as he led the 14 runners into the straight and kicked a couple of lengths clear. But Teetan was already starting to roll on Mongolian King (118lb).

The Me Tsui-trained seven-year-old reduced the deficit through a powerful stretch run that pegged the weakening leader inside the final 50 metres. The winning margin was a length and a quarter in a time of 1m 37.91s.

“I saw the second horse kick in the straight but I could feel this horse was unwinding and I knew he was going to be strong at the end,” Teetan said.

“The pace was on so everything was set up for him to have a good run; he was very comfortable on the inside and as soon as we hit the 600 metres point he started travelling nicely into it and he won well.”

Earlier on the all dirt-race programme, Goldie Flanker (128lb) flashed home hard and true to seal Teetan’s second win in section one of the Class 4 Kiu Tsui Handicap (1200m). The Manfred Man-trained seven-year-old had to work hard to reel in the Moreira-ridden Excel Delight (123lb) but the 9/1 shot was up to the task and edged the 1.8 favourite by a short-head.

“He’s an old horse and he knows the track, he’s been around a while and he dug down hard to win today,” Teetan said.

“I’ve won on him before and he likes that fast pace where he gets to the outside and runs them down, but I thought I maybe wasn’t going to catch the second horse; I got closed up before the run into the straight but he was in good shape, and for him to recover and kick again was impressive.”

“It was a nice win from him,” the rider said. “We felt that he’d handle the dirt pretty well and Benno had him in good shape – it was nice to pick up the ride.”

Moreira made the short walk back to his trackside apartment with a three-win lead over title rival Purton, after the Australian drew his first blank at a meeting since 19 February.

The Brazilian had to wait until race seven to get off the mark but he did in some style as the Michael Chang-trained Righteous Doctrine peeled out of the home turn and surged clear for a two and a quarter-length victory.

“I was quite confident about him, I did think he had a good chance but I never thought he was going to win as impressively as he did,” Moreira said.

“We’ve been learning about him and he jumps slowly sometimes but today he was straightforward and once I got him into the clear he just ran away to win impressively. Michael Chang has done an amazing job with this horse – he has improved him a lot since his last run.”

Righteous Mate had only one horse behind him with 300m to race in the Class 4 Pui O Handicap (1650m) but rolled past the rest to land a 92/1 shock under Brazilian Vagner Borges.

“He’s been running quite well and his last run wasn’t bad either, it’s just he was drawn a little bit wide last week and didn’t get the clear run; he pulled up well so I decided to run him back,” trainer Tony Millard said.

“Today they went very fast up front and then died and it suited him. He’s just a Class 4 horse but he’s done a nice job; he came to me a year ago as a stable transfer and he’s won three races since.”