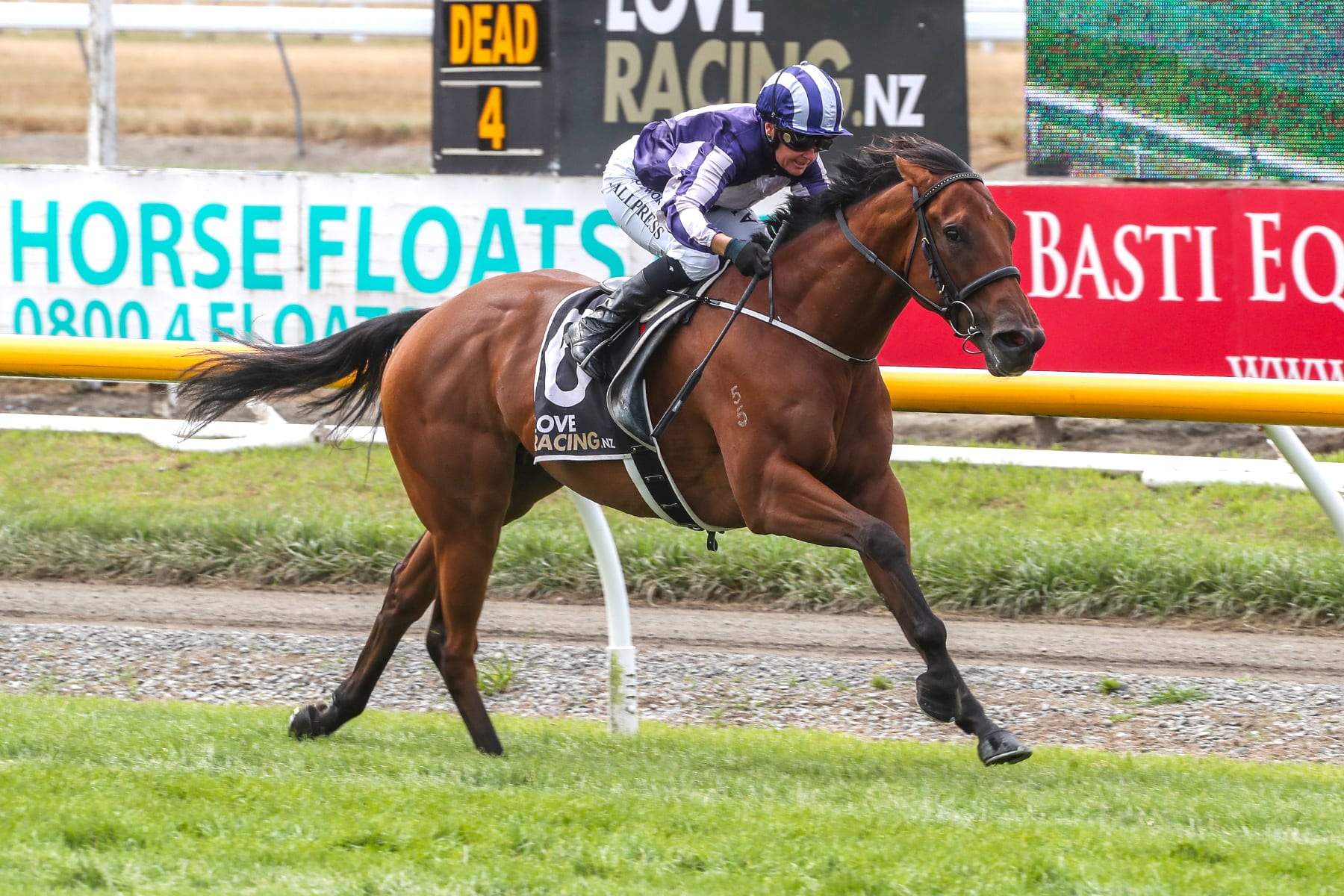 Riccarton trainer Terri Rae is planning a trip to the North Island for her smart sprinter Wekaforce. Rae has won three races with the mare since she transferred from Tony Pike’s stable in Cambridge as a two-time winner.

The daughter of Showcasing headed back across the Cook Strait last March for a hit-and-run black- type mission which almost came off, with Wekaforce caught on the line by fellow Riccarton sprinter, dual Group 1 winner Enzo’s Lad, in the Listed Lightning Handicap (1200m) at Trentham.

Wekaforce has enjoyed a spell since that Wellington trip and showed she is ready to get back into raceday action when winning under a strong hold over 850m at the Rangiora trials a few weeks ago. “With the speed she’s got, she did it easily even though she didn’t win by much,” Rae said. “She’ll go back to Rangiora again for the trials next Tuesday then I’m looking at taking her up to Hawera for the fillies and mares race over 1400m.”

Wekaforce was tried once over 1400m (fourth in the Listed Barneswood Farm Stakes) and once over 1600m (eighth in the Group 1 New Zealand 1000 Guineas) when trained by Pike, but Rae hasn’t raced her beyond 1220m in her seven starts from her stable. “She’s always wanted to rip and tear in her races, but she’s a five-year-old now and a bit older and more mature,” Rae said. “If she can settle and get the 1400m at Hawera it opens up the options for her.

“The Breeders’ Stakes at Cup week is a better option than the Stewards Handicap (Group 3, 1200m) or the Pegasus Stakes (Listed, 1000m). “She ran in the Pegasus last year and it was a disaster. She played up and missed the start and it was all over for her. She has a barrier attendant up with her all the time now.”

Though a dual Listed runner-up, Wekaforce is in need of a stakes win to boost her value as a broodmare and Rae believes it is well within her capabilities. Rae also has her sights set on the Canterbury Breeders’ Stakes for Scarfi, who is another seeking black-type success.

Scarfi has been a winner and runner-up in her four starts since joining the stable after coming south from Ruakaka with a record of three wins. “She’s had a week out spelling at home and has done well down here,” Rae said.

Also earmarked for the New Zealand Cup carnival are Wekaforce’s older sister Morweka and Windsor. Morweka is likely to contest either the Brokerweb Risk Services Pegasus Stakes on November 7 or the Lindauer Stewards Stakes Handicap four days later, while Windsor’s mission will be the Group 2 Coupland’s Bakeries Mile (1600m) on November 11.

“Morweka is a lot different than her sister Wekaforce, a lot lighter,” Rae said. “She’ll go to the trials next week, too, and we’ve got to decide whether to go for the Pegasus or the Stewards. If they were a week apart she could go for both, but she’s not the type to back up in four days.”

Morweka is also an ex-Pike stable member and has had five wins and four placings in her 13 starts for Rae, including a double last spring when beating Kiwi Ida and Prince Oz at Riccarton then Prince Oz at Ashburton.

Windsor, a former central districts galloper, doubled his winning tally when picking up a treble for Rae last summer, topped off by the Listed Timaru Stakes (1400m), and he hasn’t started since one run last March. “He’s working well and is another going to the trials next week,” Rae said. “The aim is the Coupland’s Mile.”

A notable absentee from Rae’s ammunition is the very promising Capodanno, a winner of three races and runner-up in his other five starts. “He’s been sold and will head to Australia at the end of the week,” Rae said. “He’s going to Shea Eden at Cranbourne. It’s sad to see him go, but the money was too good to turn down. He should do well over there.”

Despite the loss of Capodanno, Rae is pleased with the quality of her team, including several young members yet to realise their potential. One of those youngsters is Stella Creek, a three-year-old Per Incanto half-sister to the triple Group Three winner Coulee who has been runner-up in both her two-year-old starts. “I really like her,” Rae said. “She’ll start in the maiden three-year-old at Timaru on Friday and the plan is to try and get her to the Canterbury Belle Stakes (Listed, 1200m) at Riccarton next month.”

Rae plans to have five or six runners on Friday at Timaru, the track which gave her a career best day on July 19 when she had four winners and a close second from seven starters. After a second with Razor, she won with Paint Me Red, Scarfi, Hattrick Boys and Newmarket. “I don’t think I’ll get another day like that,” Rae said. “It was incredible.”

Paint Me Red, Newmarket and Razor will be part of her squad heading back to Timaru on Friday and also joining Stella Creek will be Kandari and possibly another stablemate. “Paint Me Red was a bit too quick to get the 1400m on the big track at Riccarton last start and will be better suited at Timaru,” Rae said.

“Newmarket came to me to try and win a couple of races before she goes to stud and we’ve won one. She’s well. “Razor has been plagued by bad draws and deserves to win one. As for Kandari, he over-raced last Saturday. He’s best let run and we’ll do that on Friday.”