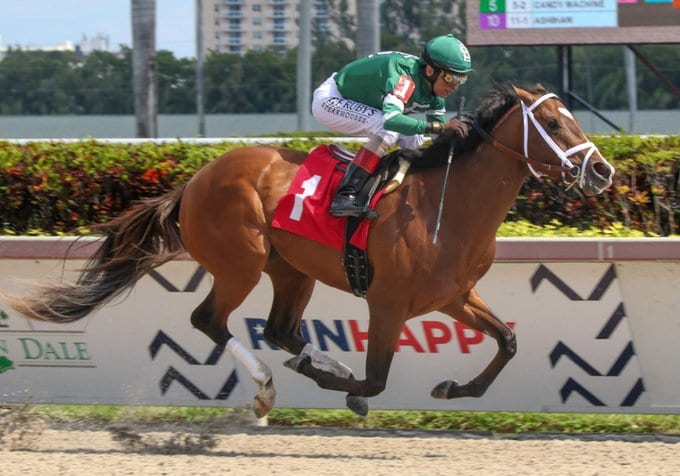 But for the coronavirus it would have been Grand National Day in the UK. However, the race has been cancelled for the first year in peace time. There is a virtual race which will raise money for charity and bookmakers are accepting bets but stakes are limited to £10 win or £10 each way. The race has been pre-recorded so a small number of operational people know the result but there are strict confidentiality conditions in place.

Meanwhile there is another meeting at Gulfstream in the United States and the shortest priced horse on the card is I’ll Fight Dempsey in the 17.52 race (race 11). It’s an Allowance Optional Claiming race for horses aged three, over seven furlongs on fast dirt. Eight horses have been declared to run and all but one of the field has won one race in the past. Golden Candy was a beaten favourite last time out in a slightly better race. Tomcat Black won his last race 98 days ago but at a lower level. Masterday won a decent maiden at Gulfstream last November. I’ll Fight Dempsey has won his only start over six furlongs and looks progressive.

The horse is -175.44 with BetOnline. I’ll Fight Dempsey is trained by Todd Pletcher and will be ridden by Luis Saez.

Pletcher is the leading trainer at the track this season and Saez is second in the current jockey standings in the current season which began at the end of last November. Saez could start the day with a winner as he rides the favourite Blessed Journey in the first race, he is still a maiden after eight races but has the form to win this Maiden Claiming race and can oblige at +180 with BetOnline. Big Treasure has the Official Rating to contend for the forecast and payout places.

The richest race on the Gulfstream card is the Allowance Optional Claiming race for horses aged four and older over one mile at 17.20 (race 10). Pletcher trains Colonist but that horse has something to find on the ratings and form. Halladay is a consistent horse who finished fourth in a Grade 1 race 56 days ago. Majestic Dunhill has not raced for over nine months and would figure if he can find his best form. First Premio was beaten by less than a length in a Grade 1 in his latest race. No other horse has produced anything at that level so First Premio is the tip at +250 with BetOnline.

Bardot is another horse with a favourite’s chance for Pletcher and Saez. The horse is a debutant in the Maiden Claiming race over six furlongs and 110 yards on dirt at 15.15 (race 6). The race for three-year-olds has attracted 13 runners of which only Bardot, Running Girl and May Day Info are contesting a race for the first time. Kozy Dreams has the best form of the horses with experience and was a beaten favourite last time out. Bardot has an eye-catching pedigree so can win first time out and that outcome is +175 with BetOnline.

Little Bella is the favourite in the Claiming race over five furlongs at 14.45 (race 5) for which horses aged three and older are eligible. De Pura Sangre is a winner at this level and has won over the course and distance. Moon Eyes was beaten as the favourite in a similar race at the track 20 days ago. Onezy’s Dream was third in a richer Claiming race at Gulfstream last month. Little Bella is in good form and can justify favouritism at +175 with BetOnline.