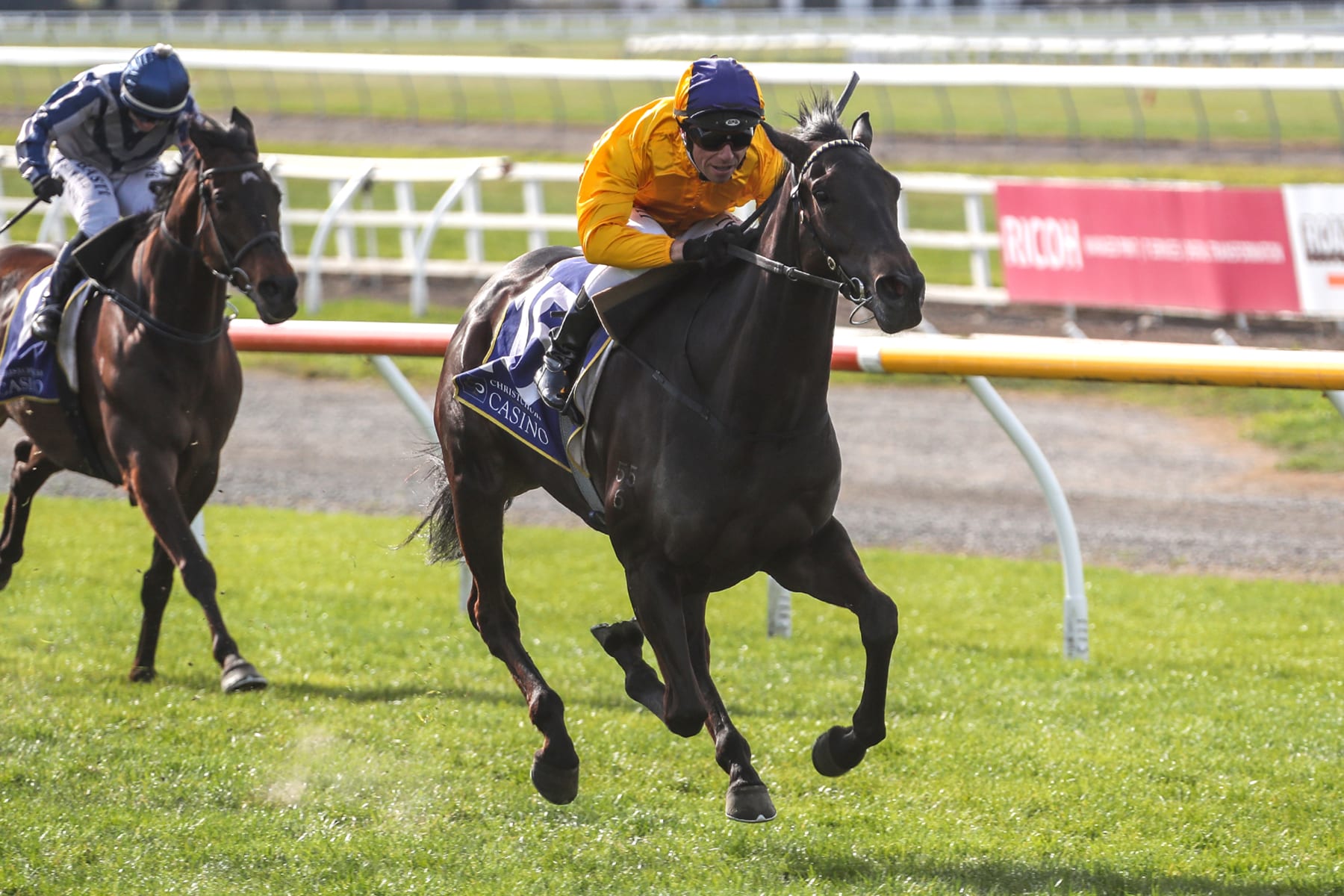 The colours of Kevin and Joanne Hickman’s Valachi Downs were to the fore at the Riccarton meeting on Saturday, headed by smart mare Communique who won the Waimakariri Businesses North Canterbury Cup (1800m). The mare will be aimed at staying features over the coming months, including the Group 3 Christchurch Casino 157th New Zealand Cup (3200m) on November 14.

The daughter of Redwood, who is trained by Stephen Autridge and Kris Shailer, has strung together successive victories. Aided by a patient Craig Grylls ride, Communique was strong through the line and the progressive four-year-old will be out to add more black-type to her resume, having won at Group 3 level in her classic year.

“She will run back at Riccarton in about three weeks’ time in the Spring Classic (Listed, 2000m),” Autridge said. “The plan is to run her on the first day of the New Zealand Cup Week Carnival over 2500m (Listed Metropolitan Trophy) and then on the last day in the Cup if we’re happy.

“She is bred to stay. She is by Redwood and is out of a Zabeel mare and she came from last when winning over 2100m in stakes company as a three-year-old. “Earlier on in this preparation I had some concerns that mentally she might not have been strong enough, but every day that has gone by, she has just got better and I think the trip down there might help to make her.”

Autridge said the mare seemed to be suited by being ridden patiently and coming with one sustained run and he also said the luxury of calling upon retained rider Craig Grylls was a big assist to the team. “It helps a lot because he rides a lot of work for us,” Autridge said. “He rides most of them and knows what they’re like and he can ride them when they have got a light weight. “On Saturday Communique had everything in her favour with the good draw (barrier 2), the good jockey and the light weight (54kgs), so we were pretty confident going in.”

Autridge and Shailer also saddled Laced With Gold, who finished runner-up in the Listed New Zealand Bloodstock Canterbury Belle Stakes (1200m) behind Matchmaker and she will now carry on to the Group 3 Barneswood Farm Stakes 3YO (1400m) at Ashburton. “We have got a question mark going to 1400m with her, but she did settle quite nicely on Saturday which we were pretty happy about,” Autridge said. “Craig suggested we have a crack at the 1400m and we hope she gets a good draw and she can jump and sit in a nice spot and see what happens.”

Karalino was another of the Autridge and Shailer team to run well when a closing third behind smart mare Wekaforce over 1200m. “She will run at Riccarton again in three weeks over 1400m and then we will make the decision whether she goes to the Valachi Downs Canterbury Breeders’ Stakes (Group 3, 1400m) or whether she runs in the Coupland’s Bakeries Mile (Group 2, 1600m) on the same day,” Autridge said.

Meanwhile, Kelly Renee, who was Group 1 placed as a juvenile broke maiden ranks over 1200m at Te Rapa on Friday and is likely to be back at the Hamilton course for the Group 2 James And Annie Sarten Memorial Stakes (1400m) on October 24. “She will improve but she will need to given her next start will be in the Annie Sarten and hopefully after that we will be heading to Riccarton (for the Group 1 Barneswood Farm 48th New Zealand 1000 Guineas, 1600m).”