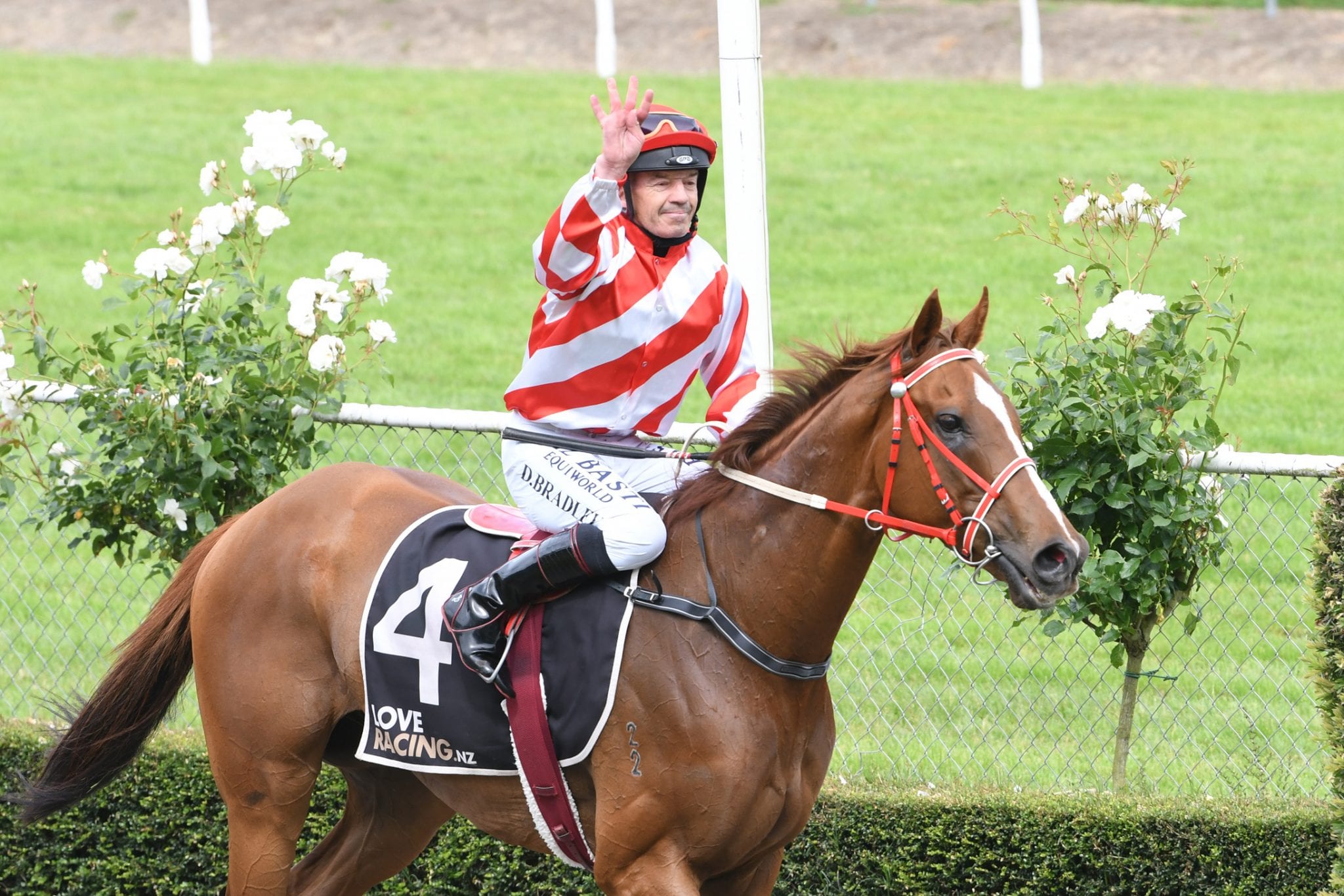 For 18 months veteran jockey Darryl Bradley was stuck on 99 career black type victories, wondering if the century would ever come up. Now, he’s won three of them in seven weeks, all while maintaining his job as the track manager at Foxton racecourse.

It was Mohaka who finally gave Bradley his 100th black type win when leading all the way in the Feilding Gold Cup (2100m) on October 31, and since then he’s guided veteran Hunta Pence to victories in the Listed Wanganui Cup (2040m) on November 20 and the Group 3 Manawatu Cup (2300m) last Saturday.

Bradley, 54, said the victories reflect nothing more than getting on the right horse. “People have said ‘you’re riding well at the moment’ but I’m not riding any differently. It’s just circumstances – I’ve gotten on good horses at the right time and given them the right rides,” Bradley said. “But it can be a snowballing effect. People like a jockey that’s winning, and winning creates better opportunities.”

But things dropped away suddenly after 2015-16, and he hasn’t ridden more than 15 winners in any season since then. It was during this lean spell that Bradley began thinking about career options away from riding. He began assisting Awapuni course manager Barry Bambry, and when the Foxton track manager’s position came up two years ago, Bambry told him to get on the phone as quickly as possible.

It’s a decision Bradley hasn’t regretted for a moment. “I’m absolutely loving it here. It’s a very, very good club to work for,” he said. “I was scratching to get rides, and I finally had to get out and look for another job, which I knew one day was going to happen, It was great I was able to stay working in an industry I am so passionate about. “My priority is the Foxton Racing Club, but when I got the job I asked if I could keep riding and they agreed, and it’s worked out that I’ve shown them that I can do both.”

And though Bradley doesn’t think his recent success is due to any change in his riding, he does acknowledge he goes to the races in a more relaxed state since picking up the Foxton job. “Beforehand, it was much more stressful because I knew I was riding well but the lack of rides and success meant I was coming home frustrated, and sometimes in that situation you can overthink things. “But now that I’ve got a career I have much more security and my mindset’s in a much better space.”

Bradley will be at Awapuni on Boxing Day, where he has four rides booked on the nine-race card, the best of which looks to be Marotiri Belle in a Rating 65 1200m contest.

Meanwhile, he’s also looking forward to reuniting with Mohaka and Hunta Pence, and hopefully a chance to win a race that’s eluded him to date. “I’ve won a New Zealand Cup (Group 3, 3200m) and an Auckland Cup (Group 1, 3200m) but I haven’t won a Wellington Cup (Group 3, 3200m),” said Bradley, whose best effort was a dead-heat for second aboard Awesome Planet in the 2011 contest won by Red Ruler. “That’s one I’d really love to win.”