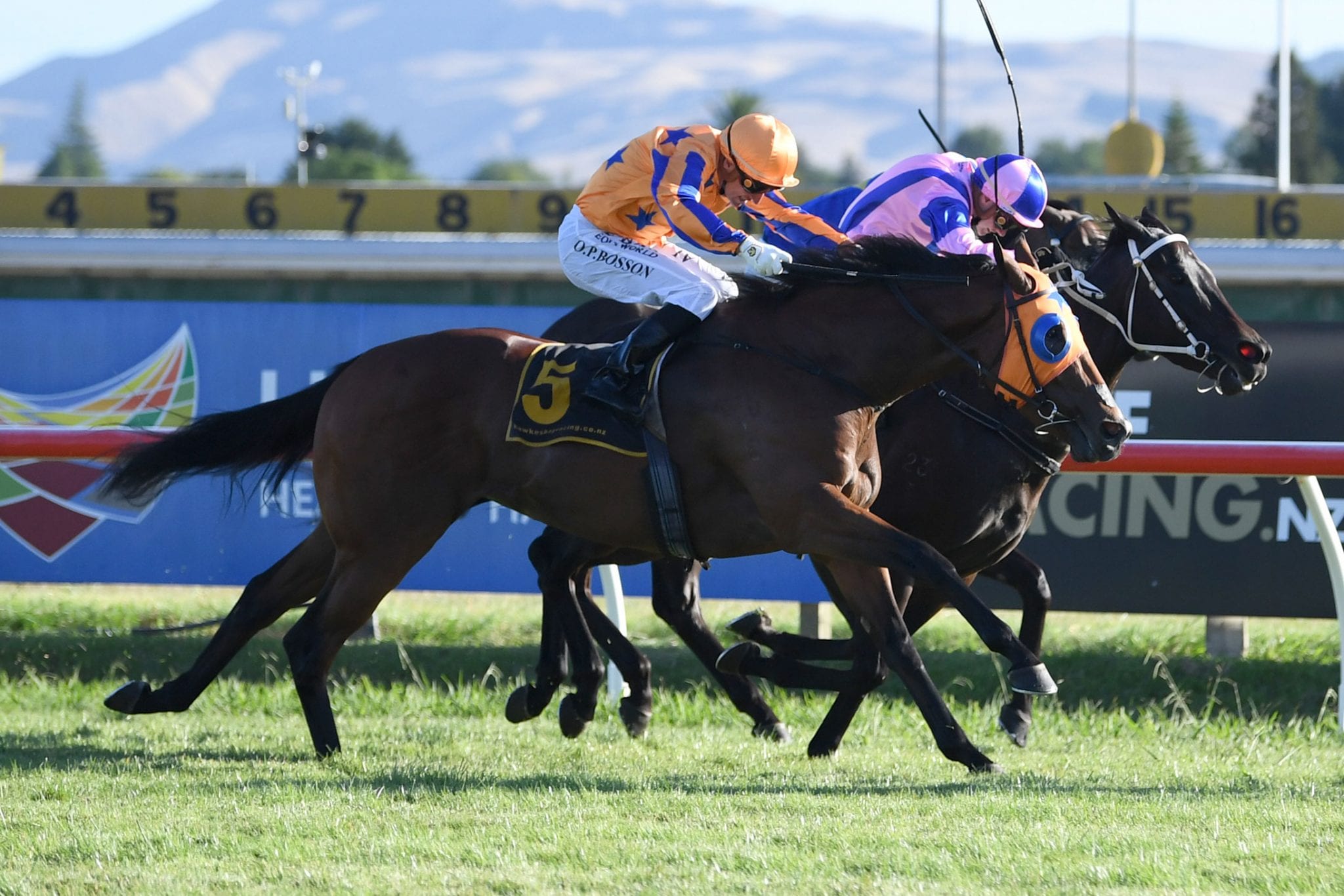 One of the most valuable fillies in New Zealand produced a stunning performance at Hawke’s Bay on Wednesday to remain undefeated in two starts to date. Exaltation, a three-year-old half-sister to New Zealand Horse of the Year Melody Belle, came from an impossible position to reel in her rivals and claim the Farewell Butch & Tess Rating 65 (1200m) at Hastings for trainer Jamie Richards.

The daughter of Not A Single Doubt came from last and jockey Opie Bosson was ice cool as he waited to clear traffic before unleashing the filly late. “I thought that was a great win and I got a real buzz out of that. It was awesome, really, and good to have her back,” Richards said.

“We’ve had a few injury hold-ups with her and bits and pieces, but the team have done a great job to present her at the races in very good order. “I was mindful that she might have been looking for 1400m already, but her class got her through it and it’s going to take her a long way.

“It’s a thrill for the owners and stands her in good stead going forward. She’s always been a special filly, right from the time that David (Ellis) bought her and obviously she has a lot of promise to live up to. “We won’t get too far ahead of ourselves at this stage, but the Wellington Guineas (Group 2, 1400m) on Oaks Day at Trentham could be a nice race for her. I think it would suit her and she looks quite exciting.”

Te Akau principal David Ellis had the distinction of buying Melody Belle as a yearling at Karaka, and following inspections was keen to purchase her half-sister, from the draft of Haunui Farm, at the 2018 New Zealand Bloodstock Book 1 Yearling Sale. “It was a huge performance and a huge thrill,” Ellis said. “To see her win like that suggests she’s got a terrific future, and it was just an incredible ride by Opie. “It was a phenomenal effort by Jamie to have her ready to win first-up for four months, which is not easy to do.”

Raced by the Te Akau 2018 Fabulous Fillies Breeding Syndicate, managed by Karyn Fenton-Ellis (MNZM), Exaltation was bought by Te Akau principal David Ellis for $900,000 and is part of a broader portfolio of high quality fillies with residual value.

“Members in the syndicate have been extremely patient and they’ve got two really good fillies. Festivity, a daughter of I Am Invincible, and Exaltation, have both raced twice and won each time. “They invested a lot of money, but it looks well spent when you consider she is a half-sister to Melody Belle, who has won a further nine Group 1s since we bought this filly. And Festivity has a hell of a good pedigree too.

“She (Exaltation) was a standout filly from the moment I saw her at Haunui Farm, a stunner. She took everything in her stride at the sales complex and never turned a hair. I opened the bidding at $800,000, which is the first time I’d ever done that, but I knew there were a lot of people that were on the filly at the sale and I thought my only chance of getting her was to be very strong. And, I managed to get her for $900,000.

“It’s an unbelievable filly family and I thought the mating with Not A Single Doubt was absolutely top- class. “Both Melody Belle and Exaltation were bred by Marie Leicester and I’ve been watching fillies from that family racing for the past 40 years. The Sarten family, Marie’s parents, have always done a fantastic job and are really good horseman. “Marie is a big supporter of the stable and she has given us a two-year-old half-sister by Tavistock to train, and on Tuesday we had a three-quarter sister, La Flora Belle (Iffraaj), trial very well at Avondale, which Marie owns and races with friends.”

Ellis is busy tidying up the sale of yearlings purchased recently at Karaka, and it is wedding time in the family as well. “It’s been a very exciting week for us because not only have we got just a few shares left to sell, but our daughter Lydia marries Jamie Roseby today (Thursday),” he said. “We’re going to Headquarters for a big party on Friday and everyone from the wedding is going to Derby Day on Saturday at Ellerslie.”