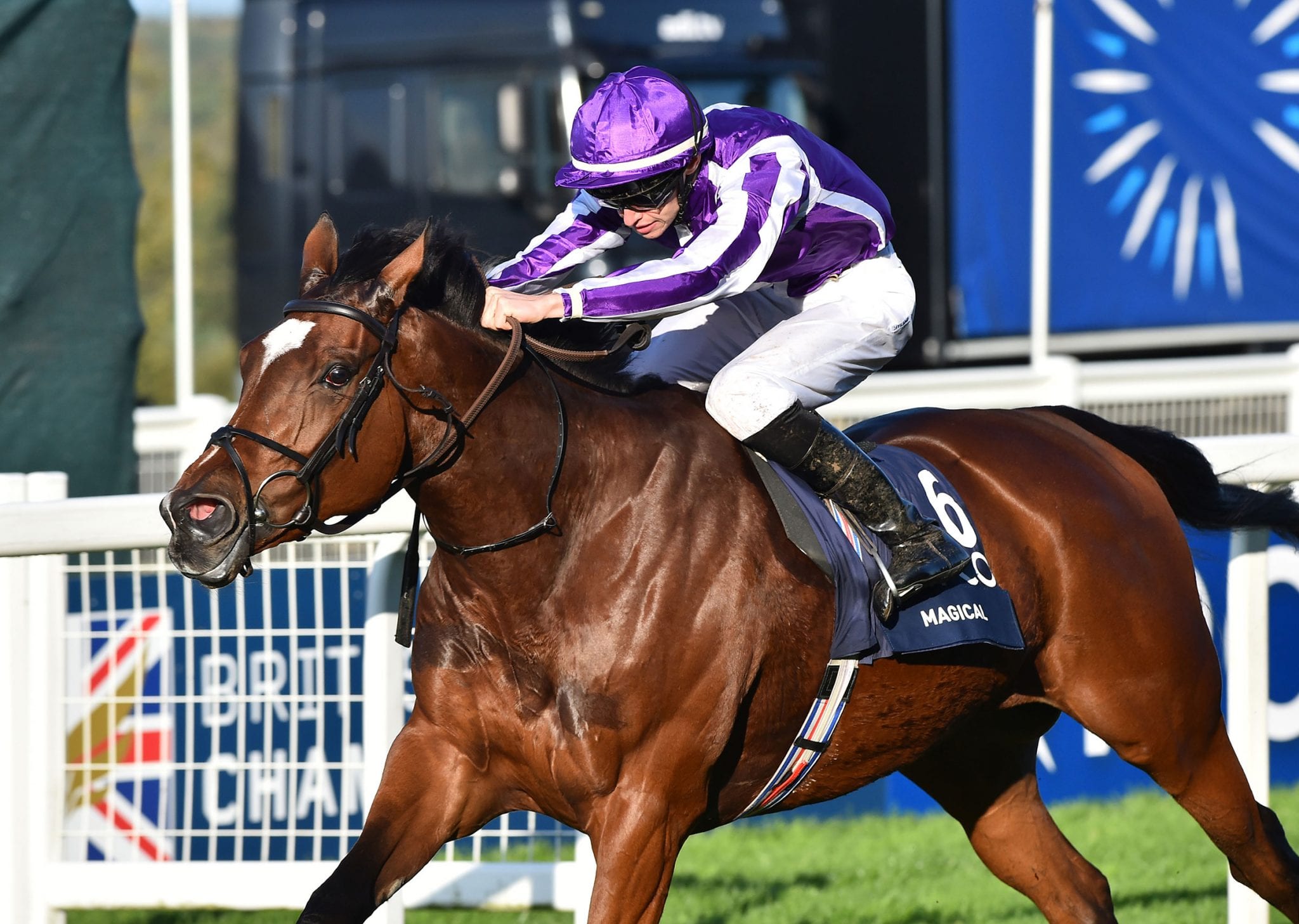 Magical is among a stellar line-up of 45 horses selected for the HK$95 million LONGINES Hong Kong International Races at Sha Tin on Sunday, 13 December.

Aidan O’Brien’s superstar mare is just one of 17 Group 1 winners set to compete. The globetrotting daughter of Galileo is bidding to make history by becoming O’Brien’s most prolific Group 1 winner with eight top-level wins – the most of any O’Brien-trained flat horse – and she is the headliner among a brilliant contingent of 15 overseas raiders aiming at this year’s “Turf World Championships”.

While the COVID-19 pandemic has created uncertainty around many international racing events, the strength of the international presence in this year’s entries confirms that the Sha Tin Showpiece remains high on the agenda of international horsemen.

Magical is one of five in a powerful cohort from O’Brien, and victory in the Hong Kong Cup would set her apart from fellow O’Brien-trained seven-time Group 1 winning champions Rock Of Gibraltar, Minding, Yeats and Highland Reel as the Irish handler’s most prolific winner at the top-level.

Also from Japan, Group 1 winning sprinter Tower Of London features, as does Danon Smash, who returns for a second tilt at the Hong Kong Sprint. Last year’s Group 1 Victoria Mile winner Normcore features in the Cup along with Danon Premium, a Group 1 winner as a two-year-old and runner-up to Almond Eye in last year’s Group 1 Tenno Sho Autumn (2000m).

Singapore will have sole representation in the form of two-time SIN Group 1 winner Inferno in the Sprint. The talented speedster has won eight of his nine career starts, and his Lion City Cup (1200m) success came in race-record time (1m 8.28s), a half-second outside the course record set by dual Hong Kong Sprint winner (2007 and 2009) Sacred Kingdom in the 2009 KrisFlyer International Sprint (1200m) at Kranji Racecourse.

France has two entries, spearheaded by last-start Group 1 QIPCO British Champion Stakes (1993m) runner-up Skalleti who is entered for the Cup. A 12-time winner from 16 starts for up-and-coming trainer Jerome Reynier, the five-year-old has three Group 2s and two Group 3s to his name, including a defeat of the subsequent Prix de l’Arc de Triomphe (2400m) winner Sottsass at Deauville in August, while stablemate and 2019 Bahrain International Trophy (2000m) winner Royal Julius joins him but contests the Vase.

A strong Hong Kong team is headed by Golden Sixty, whose Group 2 Jockey Club Mile success on Sunday (22 November) made him only the fourth horse in Hong Kong racing history to win 10 consecutive races after Silent Witness, Beauty Generation and Co-Tack. Hong Kong’s reigning Horse of the Year Exultant and dual previous Horse of the Year Beauty Generation bolster local hopes as they bid for their second and third respective wins in the Vase and the Mile, while top-level winners Waikuku and Southern Legend will also be in action.

The 2019 BMW Hong Kong Derby (2000m) winner Furore will take to the Hong Kong Cup after defeating Exultant in the Group 2 Jockey Club Cup, while steely grey Hot King Prawn will face off with fellow grey Classique Legend, who arrives in Hong Kong rated 125 on the LONGINES World’s Best Racehorse Rankings as the joint-highest rated sprinter in the world. He has joined the Caspar Fownes yard after an impressive conquest against seven individual Group 1 winners in the 2020 The Everest (1200m) at Randwick Racecourse.

Mr. Andrew Harding, the Hong Kong Jockey Club’s Executive Director, Racing, said: “The LONGINES Hong Kong International Races is firmly established among a select handful of the world’s greatest international racing occasions. To have entries of this calibre in any year would be notable but this year’s standard is remarkable given the challenge of the pandemic and all its attendant travel and quarantine issues.

“We are delighted that the quality of the selected runners for this year’s LONGINES Hong Kong International Races is in keeping with our long-held commitment to deliver sporting excellence and Magical’s participation is particularly exciting when you think of the significant slice of history that she could create for Aidan O’Brien.

“Exultant will look to recapture his Vase title, while the old marvel Beauty Generation adds intrigue to the Mile. Add in some top-class Japanese raiders and our leading local hope Golden Sixty and everything surely points to a thrilling afternoon of sport on 13 December.”

World superstar Magical heads to Sha Tin with a record of seven Group 1s from 27 starts having raced in 20 Group 1 races around the world and she will – on 13 December at Sha Tin – look to become an eight-time Group 1 winner.

The Galileo mare heads to Hong Kong’s big track off the back of a close second in the Group 1 LONGINES Breeders’ Cup Turf (2400m). Two starts prior to that she tallied her most recent Group 1 success in the Group 1 Irish Champion Stakes (2000m) at Leopardstown, where she got the better of a sustained battle with current LONGINES World’s Best Racehorse Ghaiyyath.

The local brigade is boosted by an invigorated Furore. The 2019 Hong Kong Classic Mile and BMW Hong Kong Derby hero has won his last two races at Group 3 and Group 2 level, both times beating reigning Hong Kong Horse of the Year (2019/20) Exultant.

After becoming the fourth horse in Hong Kong racing history to win 10 consecutive races, Golden Sixty will look to secure his first Group 1 in this year’s Hong Kong Mile, but after sweeping aside the local opposition, the son of Medaglia d’Oro faces his biggest test to date: last year’s winner, Admire Mars, who is back to defend his crown.

In addition, the local brigade features Waikuku, who returns first-up aiming to emulate former John Size galloper Glorious Days, who recorded a famous Mile success in 2013 on his first run of the season. Southern Legend who got the better over Beauty Generation in last season’s Group 1 FWD Champions Mile, is also included, while solid performer and Group 1 placegetter Ka Ying Star features.

A victory at Group 1 level has so far eluded Hot King Prawn, who last Sunday (22 November) claimed his second Group 2 Jockey Club Sprint to stamp himself as the local brigade’s leading hope. But, he will face off with another grey, Classique Legend, who has arrived in Hong Kong to join the yard of championship leader Caspar Fownes with an exceptional career outlined.

One of the most intriguing international challengers is Singapore speedster Inferno, who has lit up Kranji Racecourse with eight wins from nine starts, including two at SIN Group 1 level. The Holy Roman Emperor gelding travels to Hong Kong as the international sprinter with the least racing experience.

Also among the international trio of entries is Godolphin’s Tower Of London, who travels from Japan as the winner of last year’s Group 1 Sprinters Stakes (1200m) at Nakayama. Japan is also represented by Danon Smash, who snared second to Gran Alegria in last month’s Sprinters Stakes at Nakayama.

Five-time Group 1 winner Exultant will look to recapture his Hong Kong Vase crown after letting it slip last year to Japan’s Glory Vase. Hong Kong’s Horse of the Year snared a further two Group 1s last term, and after proving himself as one of the world’s top stayers he will face a compact but tough line-up in his bid to reign supreme once again in December.

French raider Royal Julius has proven himself a solid globetrotter with a win in last year’s Bahrain International Trophy (2000m) and is also a winner of Italy’s Group 2 Premio Presidente della Repubblica (1800m) the year prior.

Ho Ho Khan, Chefano and the highly progressive Columbus County add to the home challenge, while Playa Del Puente, the 2020 BMW Hong Kong Derby runner-up to Golden Sixty, will race beyond 2000m for the first time.