Magical has star billing at the Hong Kong International Races 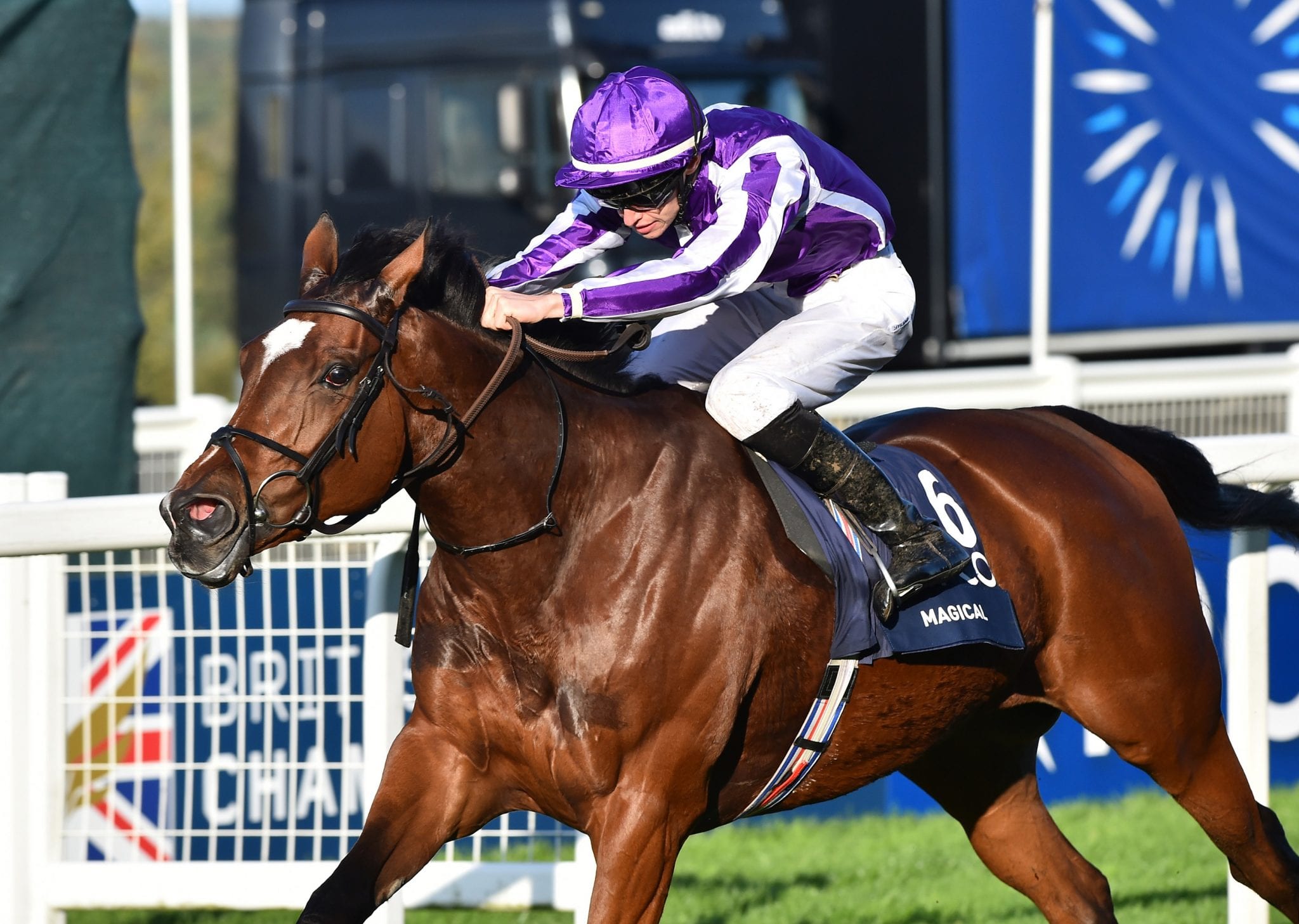 Aidan O’Brien is satisfied with reports out of Sha Tin as his stable’s travelling trio Magical, Order Of Australia and Mogul wind up for Sunday’s (13 December) HK$95 million LONGINES Hong Kong International Races, but believes the task of winning will be as tough as ever.

“We don’t expect it to be easy. Those races in Hong Kong are absolutely world class standard,” O’Brien said by telephone from his Ballydoyle base. “The horses just did a canter (on Tuesday) and the lads seem happy with them at the moment.”

The master trainer has – as is usual, even in non-pandemic days – entrusted on-the-ground preparations to loyal lieutenant Pat Keating and his small team of experienced travelling staff. Unable to jet in for the big races this year due to Covid-19 travel restrictions, O’Brien will mastermind manoeuvres from County Tipperary, hopeful that his contenders will add to his famous stable’s two previous Sha Tin glories, achieved when Highland Reel took the Group 1 LONGINES Hong Kong Vase (2400m) in 2015 and 2017.

Magical, with three of her seven Group 1 wins accrued this year, is the event’s international bill-topper, while Mogul brings with him a big home reputation and a Group 1 success in the Grand Prix de Paris; Order Of Australia shocked America and beyond last time out with a long-odds upset in the Group 1 Breeders’ Cup Mile and presents as a fascinating rival to Hong Kong’s old and new star milers, Beauty Generation and Golden Sixty.

“It’s a tough place to win, which is good for competitive racing,” O’Brien said. “Unless you go there with good horses, it’s very hard to win.”

Tempo’s the key for Magical

Magical has enjoyed another profitable year in her stellar career and would become O’Brien’s most prolific Group 1 winner should she collect her eighth top-flight victory in the HK$28 million LONGINES Hong Kong Cup (2000m).

The five-year-old has earned her status as one of the sport’s finest race mares, her talent and her character having combined to produce an athlete capable of competing at the top level in 20 of her 27 career races, with wins achieved at home in Ireland and in Britain, and fine efforts in defeat in France and the USA, notably when a close second to Enable in the 2018 Breeders’ Cup Turf.

“Magical has travelled plenty and she likes travelling, and Pat has been happy with her since she arrived there. Everything looks perfect at the moment,” O’Brien said.

“She’s a relaxed filly with a good mind and she’s raced all the way from seven furlongs to a mile and a half. She’s a mature adult now and she’s very easy to handle, very straightforward and very genuine.”

The Galileo mare started her 2020 campaign with rolling wins in the Group 1 Pretty Polly Stakes (2000m) and Group 1 Tattersalls Gold Cup (2000m) before running a gutsy second to the world’s current top-rated galloper Ghaiyyath in the Group 1 Juddmonte International Stakes (2051m). But Magical avenged that reversal in style at her next outing when snaring her second Group 1 Irish Champion Stakes (2000m), having raced at her rival’s quarters, exerting pressure throughout and then quickening on by; her latest two efforts saw her place third in the Group 1 QIPCO Champion Stakes (1993m) at Ascot and second again in the Group 1 Breeders’ Cup Turf (2400m) at Keeneland.

Magical faces a typically difficult assignment this weekend and will need to see off last year’s victor Win Bright and his fellow Japanese raiders Danon Premium and Normcore, as well as Hong Kong’s revitalised 2019 BMW Hong Kong Derby (2000m) hero Furore. And then there is Time Warp, the Cup victor in 2017, whose front-running style is likely to determine the shape of the race.

“She’ll be very happy if there’s a good pace on: that would suit her,” O’Brien said.

A sound tempo was lacking when Magical failed to defend her Champion Stakes crown two starts back, and again last month in Kentucky when touched off behind Tarnawa over two furlongs further at the Breeders’ Cup.

“She just likes a high tempo really and that’s what catches her sometimes over a mile and a half, the tempo’s not strong, like the last time. The time before that it was a mile and a quarter but it was the same thing, slow tempo early; she likes to be at a high tempo to be seen at her best,” her trainer added.

Few people if any outside of Ballydoyle would have seen Order Of Australia as a Group 1 LONGINES Hong Kong Mile candidate before his shock win in the Group 1 Breeders’ Cup Mile last time out.

“The plan we had was the Breeders’ Cup Mile but we weren’t sure if we were going to get in,” O’Brien said. “We weren’t going to, so he was going to run in a nine-furlong race out there the day before and we always had in our heads that if he got in and ran a big race, we would see if he would get invited to Hong Kong because the two races we thought would suit him were the Breeders’ Cup Mile and the Hong Kong Mile. Both are flat tracks with nice ground.”

The three-year-old only just made the Breeders’ Cup Mile cut at Keeneland, having gone there with the profile of a middle-distance galloper. The colt won at a mile and a half two starts prior with his only race at a distance as short as a mile being his career debut one year earlier when fifth. But, while the colt is by a Derby winner, his half-sister Iridessa – also by a Derby winner – not only won the Group 1 Breeders’ Cup Filly and Mare Turf at a mile and a quarter, but also the Group 1 Matron Stakes and G1 Fillies’ Mile at 1600m.

“We always had it in our heads that he could be a miler but he’s by Australia so we started him as a Derby-type horse and he ran very well when fourth in the Irish Derby, then we went back to a mile and a quarter and he ran very well in a French Derby, so it was always possible that we were going to go back in distance but with the season that we had, it looked like we were going to run out of time,” O’Brien explained.

“We gave him a break after the French Derby and it was a bit of a rush to get him fit again. We had to go to Dundalk over a mile and a quarter and he won there, and then he went to The Curragh and the ground got very bad, we ran him and we shouldn’t have – that was a mile and a quarter. It became obvious that day that the trip wasn’t for him: he travelled well but just didn’t get home at all.”

Order Of Australia will face Japan’s defending champion Admire Mars in the HK$25 million contest, as well as Hong Kong’s great new hope, Golden Sixty. But a reproduction of his Breeders’ Cup win would put him right in the mix; on that occasion, the bay overcame a wide gate, showed smart early pace and raced eagerly in fourth before quickening and driving homeward to a neck success over stablemate Circus Maximus.

“In the Breeders’ Cup he looked like a horse you could shorten up a little bit more because he travelled strongly through the race,” O’Brien said. “He had a terrible draw, especially the way the races were run out there – he was as wide as you could possibly be on a tight track over a mile. It was a massive effort for him to do what he did. To get a position from where he was drawn, Pierre-Charles (Boudot) did brilliantly. We were over the moon with the run.

“Often, horses win and everything was in their favour but it wasn’t in his favour, given where he was drawn and things, and he still won. We’ve been happy with him since and we’re looking forward to seeing him running again.”

Order Of Australia has worn blinkers in every race this season but has shown no shortage of resolution in his races, even when stretching his reserves over a mile and a half.

“He’s always worn the blinkers because he was lazy and we had them on him just to keep him concentrated,” O’Brien said. “But, looking at him in the Breeders’ Cup Mile, you wouldn’t say that he really needed them because he travelled very strongly through the race. Obviously, after doing that, we were afraid to leave them off, especially going into a race like this, we didn’t want to change too much.”

The master of Ballydoyle knows exactly what it takes to win the HK$20 million Group 1 LONGINES Hong Kong Vase (2400m): Highland Reel achieved the first of his two wins at the end of his three-year-old season and O’Brien is looking for Mogul to do the same.

Like his stablemate Magical, Mogul was undone by the steady pace in the Breeders’ Cup Turf last time but ran on well enough from deep to finish fifth of 10.

“He wants an even pace, he can quicken off even pace but in America it was only a dawdle, it was a mess really,” O’Brien said. “We had taken the decision that we were going to take our time on him but when you’re doing that you’re always at the mercy of the race. He still ran very well and we were happy with his run and we’ve been very happy with him since.”

The handler is hoping for something more akin to the Grand Prix de Paris (2400m) at Longchamp in September when Mogul quickened strongly under Boudot to win in a time more than five seconds quicker than standard.

“We always thought a lot more of him than he was showing in his runs until Longchamp. He’s a big, powerful horse and you would be hoping the plan is to keep him in training next year as well,” he said.

“It was a good race and it was the first time we really took the decision to drop him out completely, take our time on him and ride him for pace. That’s what we did and it worked very well – it was a properly-run race.”

Ryan Moore will partner Mogul and Magical on Sunday, with Boudot retaining the ride on Order Of Australia. Neither rider will partner in trackwork.

“The jockeys know them and the lads are there, Pat (Keating) and John (Manton), Dean Gallagher and Emmett McNamara and Patrick (Murphy), they’re all there with them so they’ll handle all that,” O’Brien said.

“It’s all absolutely world class out there and it’s a credit to everybody in Hong Kong, the way Hong Kong racing is run. This meeting is top of the tree, standard-wise, the way everything is done there – the track, the competition, the stewarding, the way everyone is looked after, the facilities, it’s second to none really and we’re always delighted to have horses good enough to go there.”