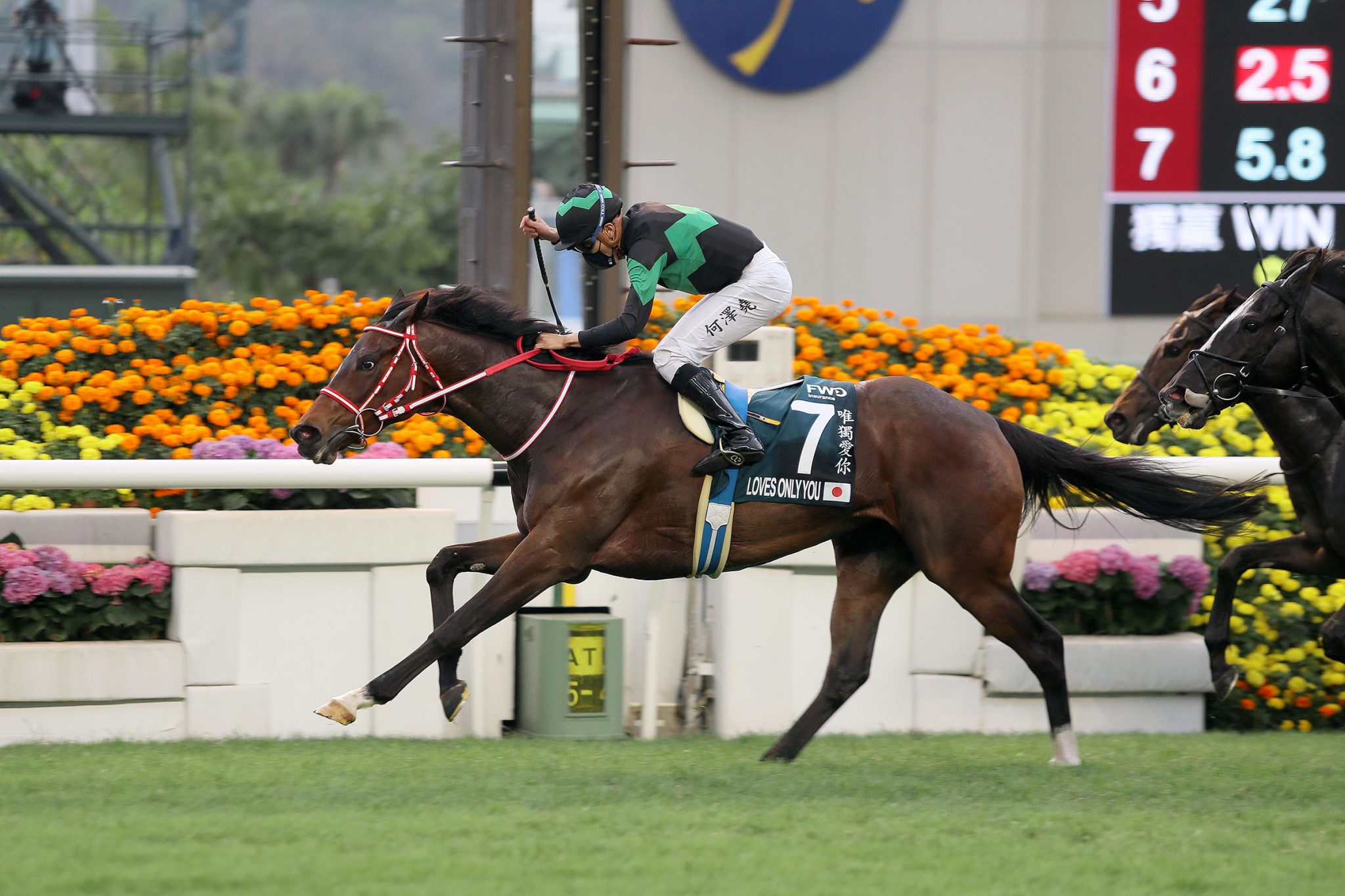 Loves Only You is among a stellar line-up of 49 horses selected for the HKD$100 million LONGINES Hong Kong International Races (HKIR) at Sha Tin on Sunday, 12 December.

Fresh off Breeders’ Cup success in the United States of America, Yoshito Yahagi’s mare is just one of 22 Group 1 winners set to compete. Returning to Hong Kong in a bid for a second Group 1 success in the city, the daughter of Deep Impact is looking to cap a superb year and she is just one of the exciting contingent of overseas raiders aiming at this year’s “Turf World Championships”.

While the COVID-19 pandemic has created uncertainty around many international racing events, the strength of the international presence in this year’s line-up confirms that the Sha Tin showpiece retains its pre-eminent position at the top of the agenda for international horsemen.

Mr Andrew Harding, the Hong Kong Jockey Club’s Executive Director, Racing, said: “The LONGINES Hong Kong International Races (HKIR) is firmly established as one of the world’s principal racing events and this year we will welcome an extraordinary line-up from Japan, Great Britain, Ireland and France which includes 16 individual Group 1 winners. To have runners of this calibre in any year would be notable but once again it is truly remarkable given the challenges of the COVID-19 pandemic.

“We are delighted that the quality of the selected runners for this year’s LONGINES Hong Kong International Races is in keeping with our long-held commitment to deliver sporting excellence and Loves Only You’s return to Hong Kong after her historical Breeders’ Cup victory is incredibly exciting, as is the arrival of a quintet from Aidan O’Brien’s all-powerful Ballydoyle operation.

“Our hometown hero Golden Sixty is looking to enhance his astonishing unbeaten streak to 16 and also set a new all-time winning record of 19 in Hong Kong should he successfully defend his Hong Kong Mile title while star sprinter Wellington’s development adds further intrigue and everything surely points to a thrilling afternoon of sport on Sunday, 12 December.”

Loves Only You spearheads a strong cohort from Japan, which includes first and second out of the Group 1 Sprinters Stakes (1200m) at Nakayama Racecourse last month, Pixie Knight and Resistencia, respectively, with both plotting raids on the LONGINES Hong Kong Sprint. Danon Smash returns to defend his crown in the dash, while Glory Vase will attempt to recapture his LONGINES Hong Kong Vase title from Mogul – last year’s victor – who also returns from Ireland to represent Aidan O’Brien.

Joining Loves Only You in the LONGINES Hong Kong Cup is Lei Papale, winner of the Group 1 Osaka Hai (2000m) earlier this year who is looking to remain unbeaten over 10-furlongs. Bolshoi Ballet – O’Brien’s American Group 1 winner – plots a course for the Hong Kong Cup, as does Mac Swiney for Jim Bolger and Dubai Honour for William Haggas. Both Mac Swiney – a two-time Group 1 winner – and Dubai Honour placed behind Sealiway in the British Champion Stakes with the latter getting within a length.

O’Brien will be double-handed in the LONGINES Hong Kong Vase as the incredibly consistent Broome – who runs in Sunday’s (28 November) Group 1 Japan Cup (2400m) – journeys to Hong Kong for the first time following his cracking second to Yibir in the Group 1 LONGINES Breeders’ Cup Turf (2400m) earlier this month at Del Mar Racecourse.

Indy Champ and Vin de Garde join the Japanese brigade bidding to overthrow Golden Sixty, as does Danon Kingly, winner of the Group 1 Yasuda Kinen (1600m) last June. Trainer Noriyuki Hori is no stranger to success in Hong Kong after the heroics of the great Maurice and he’ll be represented by Hishi Iguazu in the LONGINES Hong Kong Cup as well as the Group 1-winning Salios, who also boasts consecutive runner-up efforts to Japan’s Triple Crown-winning Contrail. Salios will contest the LONGINES Hong Kong Mile.

Joining Golden Sixty – Hong Kong’s reigning Horse of the Year – in the home team’s defence is Hong Kong’s Champion Stayer Panfield, who will be running in the LONGINES Hong Kong Cup.

Lei Papale and Hishi Iguazu join her from Japan, the former is unbeaten over 2000m and is a one-time Group 1 winner having claimed the Osaka Hai (2000m). She will embark on her first overseas voyage for trainer Tomokazu Takano.

Dubai Honour – close-up second in last month’s Group 1 British Champion Stakes – is a two-time Group 2 winner who will make his first start abroad in Hong Kong’s most lucrative contest for trainer William Haggas. Third out of the British Champion Stakes, Mac Swiney, joins Dubai Honour in the contest and will bid to give legendary Irish horseman Jim Bolger a second win in the race after Alexander Goldrun reigned in 2004.

Aidan O’Brien will be represented by Bolshoi Ballet and Japan, the latter is a dual Group 1 winner after claiming the 2019 Grand Prix de Paris (2400m) and Juddmonte International Stakes (2000m) – who arrives following a tilt in Sunday’s (28 November) Group 1 Japan Cup (2400m).

Leading Hong Kong’s defence of the LONGINES Hong Kong Cup is Glorious Dragon – along with Standard Chartered Champions & Chater Cup winner Panfield as well as Russian Emperor – second placegetter in the 2021 BMW Hong Kong Derby (2000m), Tourbillon Diamond and Ka Ying Star – who both supplemented for the race. The Tony Cruz-trained Berlin Tango will also line up in the Group 1 2000m event.

Hong Kong Horse of the Year, Golden Sixty, extended his extraordinary unbeaten record to 15 in the Group 2 BOCHK Private Wealth Jockey Club Mile (1600m) and the brilliant son of Medaglia d’Oro will attempt to defend his crown in the LONGINES Hong Kong Mile.

Danon Smash will return to defend his LONGINES Hong Kong Sprint crown, just like his sire, Lord Kanaloa did in 2013. He’ll also bid to give trainer Takayuki Yasuda a record-setting fourth win in the race; joining him from Japan is first and second placegetters out of the Group 1 Sprinters Stakes – Pixie Knight and Resistencia.

A host of young adversaries join their more experienced counterparts – Courier Wonder and Naboo Attack have shown glimpses of Group 1 quality and they’ll each look to take the next step on Sunday, 12 December.

Pyledriver has had Hong Kong on his radar for a while now and the William Muir-trainee features for Great Britain. The son of Harbour Watch defied Al Aasy in a gripping Group 1 Coronation Cup (2420m) at Epsom Downs Racecourse in June and before that boasts form around Addeybb as well as a solid third-placing in the Group 1 St Leger Stakes (2921m) to Galileo Chrome.

Runner-up in the 2021 Group 1 Standard Chartered Champions & Chater Cup (2400m), Columbus County will head the Hong Kong team along with Butterfield – a dual Group 1 winner in Brazil – as well as Reliable Team, who recently made all in the Group 2 BOCHK Jockey Club Cup (2000m).