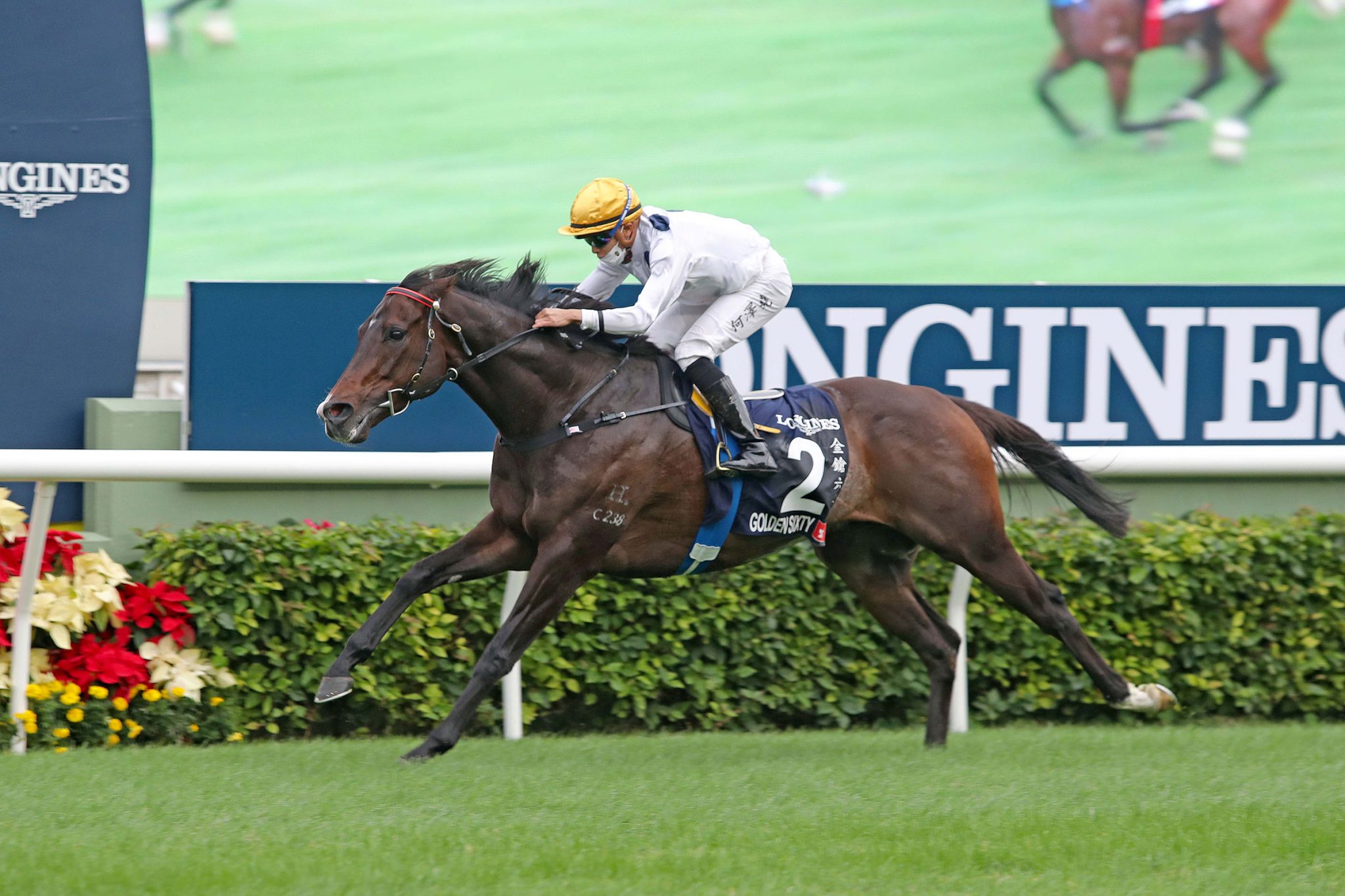 The 2021 LONGINES Hong Kong International Races has attracted a galaxy of global and local stars with 135 world-class horses included in a glittering entry, with 57 individual Group 1 winners from nine countries or regions eyeing the lucrative four-race showcase on 12 December.

While the COVID-19 pandemic has continued to create uncertainty around many international sporting events, the strength of this year’s entries for the LONGINES Hong Kong International Races again reaffirms the importance of the end-of-year spectacular to horsemen from around the world with the nomination of heavyweights Golden Sixty, Gran Alegria, Verry Elleegant, Mac Swiney, Tarnawa, Loves Only You, Hot King Prawn, Danon Smash, Nature Strip, Snowfall, Love and Sealiway.

Japan heads the overseas representation with 40 of the 90 entries received from abroad, while Hong Kong has 45 contenders listed.

Hong Kong’s Horse of the Year Golden Sixty headlines a fascinating list of entries. The brilliant son of Medaglia d’Oro hasn’t tasted defeat in over two years and will look to defend his title in the LONGINES Hong Kong Mile after blitzing last year’s contest.

A strong contingent from Aidan O’Brien’s all-conquering Ballydoyle has been entered with the Irish mastermind fielding 10 nominations. Featured is Mogul, last year’s LONGINES Hong Kong Vase hero, while his brilliant Epsom Oaks winning duo, Love and Snowfall, could also feature. Love claimed the Classic at Epsom Downs by nine lengths in 2020, while Snowfall took it up a notch with a commanding 16-length triumph this year.

Order Of Australia, Bolshoi Ballet, Japan, Mother Earth, Broome, La Joconde and Santiago also feature for O’Brien, the most single entries of any handler for this year’s flagship event as he looks to add to his three Hong Kong International Races victories.

Japan took two out of the four features last year and the ‘Land of the Rising Sun’ has once again reiterated their affinity for Hong Kong with a high-class list of entrants, including Danon Smash, last year’s winner of the LONGINES Hong Kong Sprint, while Loves Only You who sealed FWD Champions Day success back in April, could return for the LONGINES Hong Kong Cup.

Gran Alegria, a five-time Group 1 winner from 1200m to 1600m in Japan, is included and could make her first tilt abroad. Glory Vase, winner of the 2019 Hong Kong Vase, has thrown his hat in the ring as have Salios, Lei Papale, Indy Champ and Lauda Sion.

Loves Only You and Vincent Ho charged to a brilliant win in the Group 1 FWD QEII Cup on FWD Champions Day and Yoshito Yahagi is after more success at Sha Tin with his two-time Group 1-winnning mare. Her name sits alongside that of seven from trainer Aidan O’Brien, who has Bolshoi Ballet, Japan, Love, Broome, Snowfall, La Joconde and Santiago all entered.

Joining Loves Only You from Japan could be Lei Papale, who was undefeated across her first six starts which included a tough Group 1 Osaka Hai (2000m) success before her third-placed effort to Chrono Genesis in the Group 1 Takarazuka Kinen (2200m) as could Gibeon, Persian Knight and Cafe Pharoah.

Gran Alegria holds an option for the 10-furlong test, as do World Premiere, Glory Vase and Curren Bouquetd’or.

While also from Ireland is Tarnawa, H H Aga Khan IV’s top-class mare holds an entry for both the Cup and the Vase. She’s a three-time Group 1 winner who finished a close-up second in this year’s Group 1 Prix de l’Arc de Triomphe (2400m).

France is no stranger to success in the Cup with three wins in the 10-furlong showdown thanks to Jim And Tonic (1999), Pride (2006) and Vision d’Etat (2009). This year, their assault could be spearheaded by Sealiway, winner of the British Champion Stakes earlier this month.

Trainer Chris Waller has a host entries across the board with two for the Cup, headlined by Verry Elleegant, his prolific Group 1 winner and last year’s champion of the Group 1 Caulfield Cup (2400m). She was crowned Australia’s Racehorse of the Year (2020/21) and could bolster her resume, while Waller’s other mare Hungry Heart is also entered.

The home team’s defence features Furore, the 2019 BMW Hong Kong Derby (2000m) hero, Glorious Dragon and Southern Legend, while Panfield, winner of the Group 1 Standard Champions & Chater Cup (2400m) in May, holds an option for both the Cup and the Vase.

Channel Cat – who races in the iconic Calumet Farm silks – is entered for American handler Jack Sisterson. The six-year-old claimed the Group 1 Man o’ War Stakes (2200m) at Belmont Park in May, this year.

Golden Sixty, winner of his last 14 consecutive races, headlines the entries for the Mile and will spearhead the local brigade. Francis Lui’s six-year-old will look to defend his crown in the race, while the home team’s entries also includes Group 1 winners Southern Legend and Waikuku, while 2021 BMW Hong Kong Derby (2000m) winner Sky Darci is expected to have a crack as is Ka Ying Star and More Than This.

Leading the assault from overseas is Gran Alegria, Kazuo Fujisawa’s crack mare and top-class winner over 1200m and 1600m. She claimed three consecutive Group 1s through 2020, kicking off her streak with a Yasuda Kinen (1600m) triumph ahead of the phenomenal Almond Eye.

A Group 1 winner in the United States of America, Aidan O’Brien has his Breeders’ Cup Mile winner Order Of Australia entered for a second crack at Hong Kong glory, while Mother Earth, winner of this year’s Group 1 Prix Rothschild (1600m) at Deauville is entered.

Also from Ireland, Jim Bolger’s crack chestnut Mac Swiney could make his way to the ‘Far East’ for the Mile, while also holding a nomination for the Cup. The son of New Approach is a two-time Group 1 winner and he could be joined from Ireland by Pearls Galore for Paddy Twomey and the Joseph O’Brien-trained State Of Rest, winner of the Group 1 W.S. Cox Plate (2040m) at Moonee Valley on Saturday (23 October) and also the Group 1 Saratoga Derby Invitational Stakes (1911m).

Twice runner-up to Japan’s Triple Crown-winning Contrail, Salios – an exceptional three-year-old last year in his own right – holds an entry for the Mile and the Cup. Indy Champ who campaigned to Hong Kong for a luckless seventh in this race two years ago when join equal favourite will look to return for another tilt at redemption, while Lauda Sion, Vollkommen, Grenadier Guards, Lotus Land and Schnell Meister hold options.

Bolstering the home team is Stronger, Computer Patch and Super Wealthy with one-time boom sprinter Aethero adding intrigue after a lengthy stint on the sidelines.

Last year’s winner, Danon Smash is entered to defend his title and win a second LONGINES Hong Kong Sprint just like his sire, Lord Kanaloa who did so in 2012 and 2013. But he might not be alone from Japan, with Pixie Knight, winner of the Group 1 Spinters Stakes (1200m) pitted to take his exploits abroad, while Diatonic, Curren Moe, Resistencia and Shivaji are also included.

Australian speedster Nature Strip, a sharp six-time Group 1-winning sprinter who recently claimed The Everest (1200m) at Royal Randwick, is one of four entrants from Down Under, including Eduardo who finished third to Nature Strip in that race, while from Ireland trainer Adrian McGuinness has last-start Group 1 Prix de l’Abbaye de Longchamp (1000m) winner A Case Of You entered.

Aidan O’Brien has the most LONGINES Hong Kong Vase wins in history and the Irish legend will look to further enhance that record with Mogul – last year’s winner of the race – leading a charge of seven other possibilities into the 12-furlong showdown.

Against O’Brien’s cavalry will be no shortage of talent; last-start Group 1 British Champion Stakes winner Sealiway is entered for Cedric Rossi, Ebaiyra is one of two for Alain de Royer-Dupre along with Valia, while Magny Cours could represent Andre Fabre, France’s iconic 24-time champion trainer. Also for France is Sweet Lady, Eudaimonia, Monty and Bubble Gift.

Frenchman Christophe Clement – who now trains in the United States – has entered Gufo, winner of the Group 1 Sword Dancer Stakes (2400m) at Saratoga in August this year.

Japan has had no shortage of Vase winners in recent times and their charge could be led by Glory Vase, winner of this race two years ago, while Titleholder swept into calculations with victory in the Group 1 Kikuka Sho (Japanese St Leger) over 3000m on Sunday. The pair could be joined by Curren Bouquetd’or, World Premiere, Satono Saltus, Meiner Virtus, Uberleben, and Authority.

Great Britain has tasted significant success in the Vase and they have Away He Goes, Hukum, Spanish Mission and Pyledriver, a last-start Group 1 winner in the Coronation Cup over the Vase distance 2400m at Epsom Downs.

Like last year, the staging of the LONGINES Hong Kong International Races will be subject to approval by the Hong Kong SAR Government.