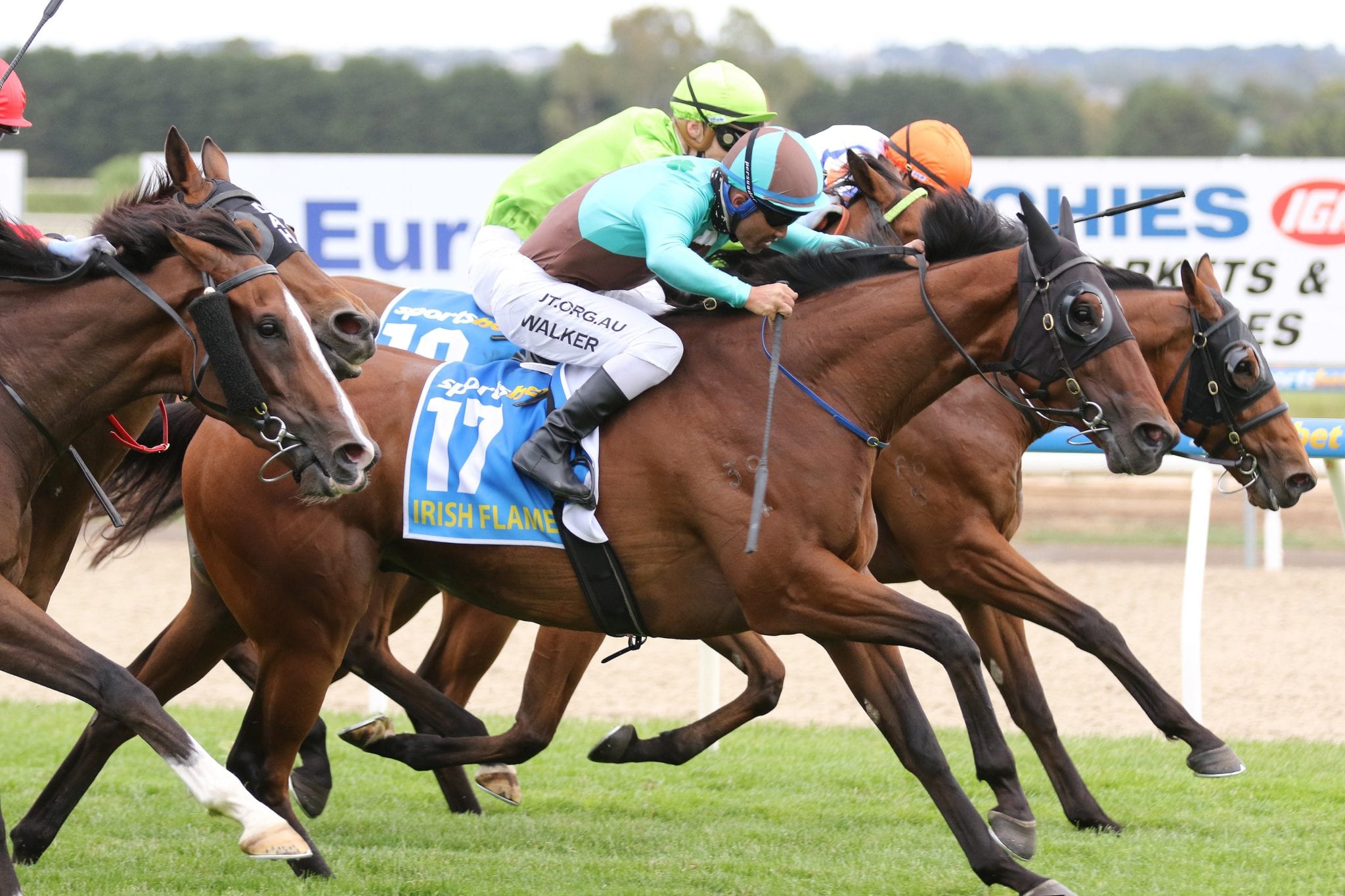 She may have lived on the Central Coast of New South Wales for 40 years but Margaret Reid, the part-owner and breeder of the Listed Ballarat Cup (2000m) winner Irish Flame, is still very much a Taranaki girl. So much so that the green and brown colours that Irish Flame races in feature a stylised logo of Mount Taranaki and the nearby Waiwhakaiho river.

She shares those colours with her husband Bill and fellow breeder and part-owner, Inglewood farmer Gary Kemp. For good measure there were another couple of ‘Naki’ boys associated with the Ballarat Cup win, trainer Brett Scott and jockey Michael Walker.

Now a six-year-old by the versatile Zabeel stallion Zed, Irish Flame won his first race back in 2017 and he became that stallion’s first and to date only two-year-old winner when he won the Group 3 Taranaki 2YO Classic (1200m). In the care of trainer John Wheeler, a relation of Reid’s through her mother, he won a further five races, before transferring to Mornington this year and his Ballarat Cup win completed a hat-trick that took his tally to nine wins.

“John always said that he will be at his best as a six-year-old he is going to take that long to fully mature,” she said. “He would have liked to have brought him over to Australia to race this winter, but we can blame COVID for him coming over and going to Brett. “It was a really big decision. John had done such a great job. Gary and I had had horses with Brett before and when racing shut down in New Zealand we discussed it with John and he gracefully said that it would be great for Brett to get a good horse. He was so gracious and charming about it, but that is just what he is like.”

That change of location took place after a trial placing at Waverley at the end of June and Irish Flame hasn’t looked back. The six-year-old has won three of his eight starts for Scott, with a further four placings, and has added A$514,850 since crossing the Tasman.

The racing and breeding journey for the Reid and Kemp partnership started about 10 years ago, when Margaret decided she wanted to pursue a life-long dream of having a horse race in Melbourne. “I had always been interested in horses and rode as a child and went to pony club ,” she said. “Growing up in Taranaki I heard all the romantic stories about horses going to Melbourne with names like Rising Fast. “I always dreamed of having a horse race in Melbourne, and it was a dream too as we were busy raising our boys and there wasn’t any money for racing horses.

However, in 2010 a family friend dropped dead suddenly and I decided it was time to chase that dream and with good friends from Taranaki, Gary and Brenda Kemp, we purchased a trial-winning horse and that was the start of our adventure.

“I was at Randwick one day and I saw Usainity win the Group 3 Frank Packer Plate (2000m) and I really liked the look of him. I looked up Zed’s pedigree which is fabulous, and knew he was standing in Taranaki, where I am still -prior to COVID anyway – a frequent visitor, and that added to the appeal. “I said to Gary I would love to get a Zed, and he was really keen as well and said let’s get a mare, and the search begun.”

The search took the partners to the Gold Coast where the Nathan Tinkler mare dispersal sale was being held. At that stage Zed had just two stakes winners – Survived and Usainity, Survived was out of a Generous mare and Usainity out of a Bin Ajwaad (IRE) mare, so they were the lines that were being considered.

“We looked at a Generous mare but she went for too much,” she recalled. “Bill and I had to return to the Central Coast, so we left Gary and Brenda in charge to look at Fleur De L’Orient a daughter of Fleur De Chine who had won the Group 3 Taranaki Classic which resonated with me, and they managed to secure her.”

By Thunder Gulch, Fleur De L’Orient won two races in Australia. She is a sister to the Group 1 Australasian Oaks (2400m) winner Tully Thunder, and a half-sister to the Listed Champagne Stakes (1600m) winner Sufficient and the stakes-placed winners Fleur De’here and Landehero.

“Straight away we teamed up with Mark Corcoran and sent her to stud, and a year later we got a beautiful little foal, I have always called Iffy,” Reid said. “Unfortunately, in the July before he was born Brenda suddenly passed away and she never got to see him, but we made sure she is still part of the journey by continuing to race Irish Flame in her name. “Brenda was a flaming red head, and she also always wanted to explore her Irish heritage, so when it came to naming “Iffy” we decided on something Irish and Brenda actually means “flaming sword”. It’s a name to remember her by.”

Fleur De L’Orient produced six foals before she was purchased by the partnership including Langridge Street, by Elvstroem, a winner of four races who was placed at Listed level in Tasmania, and Volcanic Sky, who won five races also in Tasmania.

For her new partnership she has produced Irish Flame, and Irish Flare a lightly raced gelding by Haradasun who they have in work with John Wheeler, along with Fleur De Montagne a two-year-old full-sister to Irish Flame who is also in his care. “She missed to Per Incanto and was exported to Australia to be served by Teofilo that both Gary and I are big fans of, unfortunately she had a few problems and didn’t get in foal,” Reid said.

“The next season we found a new vet who picked up the problem straight away, and the mare had a wee operation and got in-foal to Dundeel on the first serve. She produced a stunning filly last year, and then unfortunately collapsed a tendon. “I had her in a stable with the foal for about four months, but unfortunately we couldn’t keep her alive and we had to put her down in January, it was like losing a family member. At least the foal had a good start, and we will not be selling her.

“But at the end of the day we have had so much pleasure out of Irish Flame, it has been lovely to breed a nice Zed. He is such a versatile stallion, and I don’t think the fun is over yet. We can’t wait for the autumn which is the next plan for “Iffy”.”