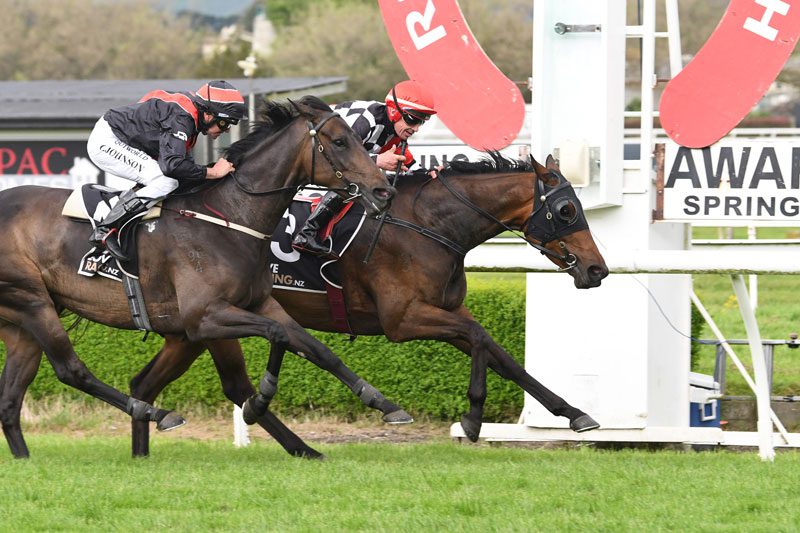 The connections of Mohaka are hoping she can repay their faith on Sunday after they made the late nomination payment for the Group 2 Barfoot & Thompson Auckland Cup (3200m) at Ellerslie this weekend.

The six-year-old mare has been in good form of late, placing behind Waisake in the Group 3 Trentham Stakes (2100m) in January before running fourth in the Group 3 Taranaki Cup (2000m) last month.

But it was the way she ran home to finish third in the Group 2 Avondale Cup (2400m) last start that convinced trainers Guy Lowry and Grant Cullen to make a late run for the Auckland Cup.

“She ran third in the Avondale Cup and she just pulled a bit hard, which was a bit of a shame,” Lowry said.

“That was her first go right-handed and first go over 2400m. I thought she stuck on really well.

“She has worked up well so we will push on to Sunday with her.”

Mohaka has already joined Lowry in Auckland as he attends New Zealand Bloodstock’s National Yearling Sale at Karaka in the lead-up to racing this weekend.

“On her work this morning I can see her right in it, otherwise we wouldn’t have paid the late nomination,” he said.

Lowry expects his charge to see out the two miles on Sunday and would like her ridden positively if the draw allow.

“We would like to go forward but we will just see what happens,” he said. “It would be nice to think she could go 3200m.”

Mohaka will once again be ridden by Kate Hercock and Lowry said they have formed a great partnership.

“We have Kate Hercock riding her and she knows her,” he said. “She has ridden a couple of nice races on her and she tries for us, so that is all we can ask.”

The broodmare paddock is beckoning Mohaka in spring, but she could get her chance to ply her trade in Australia before then if she performs well on Sunday.

“I did enter her for Sydney,” Lowry said. “This is her last racing prep, so we will just see what happens.

“I am happy with the way she is going, but at some stage they come to an end.”