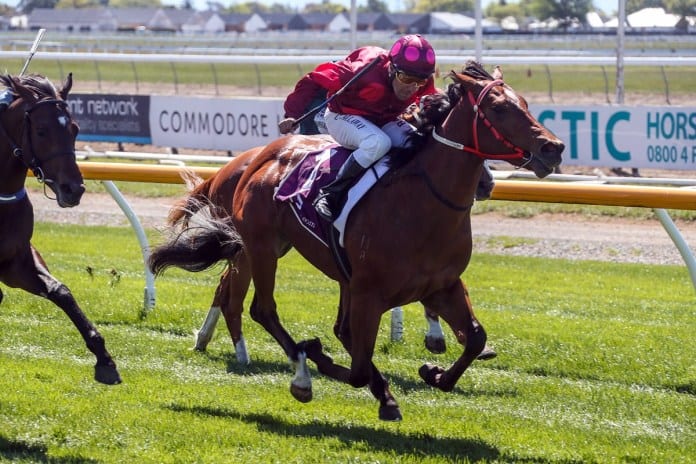 Ruakaka trainer Kenny Rae is like a kid before Christmas as he counts down to Saturday’s $1m Doubletree by Hilton Karaka Million 2YO (1200m) at Ellerslie. The knock-about horseman, who trains in partnership with daughter Krystal Williams-Tuhoro, will saddle exciting youngster Follow Your Dreams, a $7 third favourite in the million-dollar feature.

Rae took the laid-back colt to the South Island for his first three starts, where after winning his first two races at Riccarton, he finished runner-up to Avonallo, whom he meets again on Saturday, in the Listed Welcome Stakes (1000m).

He then returned north and finished an eye-catching fifth on Boxing Day at Ellerslie when racing without luck. “That was the run of his life. It was better than his two wins and a second to me. He ran the fastest last four sectionals of the race,” Rae said.

Bred by Valachi Downs principal Kevin Hickman, Follow Your Dreams, a son of emerging sire Contributer, is the first foal of O’Reilly mare Dare To Dream and was purchased by Rae for $24,000 at the Book 2 Yearling Sale at Karaka 12 months ago.

“I had two out of his family and one went to Hong Kong and one went to Singapore. That’s what made me look at buying him,” Rae said. “When I looked at him, I had a horse called Upsala for Lars Pearson a few years back, and he was a lovely two-year-old and this fella was a clone physically. “I have paid up for the Karaka Million on the odd occasion before and the horses have never made it there.

“I wasn’t initially going to pay up with this bloke, but they give you 30 days after the sales to enter and I started breaking him in. “I said to Shona and Alex Rumble who bought him with me that the horse was six months physically and mentally ahead of his time and that if he could run he had a hope. “Hence we paid up on the last day before the cut-off and he can definitely run.”

The colt’s good temperament has enabled him to keep his manhood and Rae said he was versatile enough to be ridden forward or back. “I’ll leave that up to Craig Grylls,” Rae said. “He doesn’t run on adrenaline like a lot of two-year-olds. There is no excitement in him.

“He is a gem of a horse to have at home and I normally geld all the colts because we haven’t really got the facilities for them. But he has been at home and stands in his box and watches other horses on the walker and he never gets excited. He is the perfect racehorse.”

Rae revealed veteran galloper Kaharau had come out of semi-retirement to play the role of lead pony for Follow Your Dreams as the youngster adapted to beach training. The well-travelled trainer said he has been overwhelmed by the well-wishes from the length and breadth of the country, including his many friends in the South Island where he has recently returned from campaigning horses on the West Coast.

“It’s been amazing. Obviously people from Northland but also the guys down South have been really supportive. My family will be there but there are people coming to watch him that have never been to the Karaka Million before,” Rae said.

“He has got a bit of a fan club and he is not even a topline racehorse, yet. “This is what racing is made of. It would be a big boost for Ruakaka. If he could run in the first four I’d be rapt but wherever he finishes on Saturday, he is going to be a really good horse.”

The power of Te Akau Racing, who have five prospective runners including favoured pair On The Bubbles ($3.80) and Millefiori ($4.00), looms large, with Rae full of respect for the operation which has claimed the Karaka Million 2YO for the past four years in succession with the likes of Melody Belle, Avantage, Probabeel and Cool Aza Beel.

“They’d probably die of fright if we won,” Rae said. “I’m just a small peasant stable taking on the big guns. Two or three months ago it was a dream. Now it is a reality.”