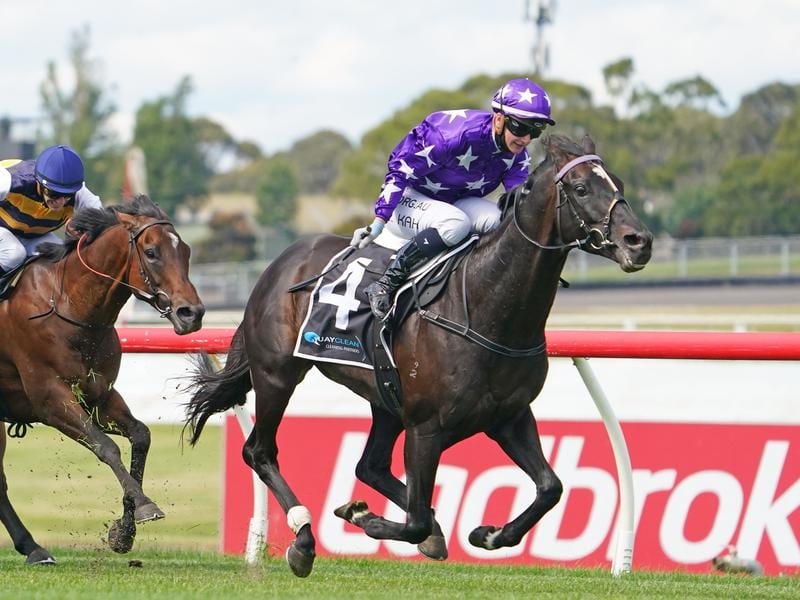 Star jockey Jamie Kah thanked Damien Oliver for prompting her to make the mid-race move which led to Sound winning the Zipping Classic.

For the first 1000 metres of the race, Kah on Sound raced alongside Oliver who was on the favourite Avilius and both horses were well back and over-racing.

“I had ‘Ollie’ yelling at me to get going so I thought I should listen to him. I have to credit him,” Kah quipped.

Kah then decided to ease Sound out and she worked around the field to sit outside the leade, Levendi, which proved the winning move.

The jockey said she felt for connections when Sound was just beaten at his previous start in the Hotham Stakes as if he had won that race he would have qualified for the Melbourne Cup.

Kah said she was confident Sound would win the Zipping Classic (2400m) when the field straightened for home as they only had to run down Levendi.

The victory completed a treble for Kah, who has now won 30 races in the city this season.

Trainer Mike Moroney was thrilled to get a win with the former German stayer, who has amassed nearly $850,000 in Australia despite Saturday’s Group Two being his maiden success in Australia.

Moroney had been adamant that Sound was racing in the best form of his career with three seconds from his previous four starts.

Although he’s an eight-year-old, Moroney believes the northern hemisphere-bred stayer can still be competitive at the highest level.

“They’re six months behind but that still makes him seven-and-a-half. He’s bred that way too. It is a slow maturing family,” Moroney said.

“I still think he’s got another good preparation in him.”

Favourite Avilius made up some ground to finish fifth but James Cummings’ Melbourne foreman Sean Keogh said the slow speed didn’t suit him.

“Instead of making a long, sustained run into the race, ‘Ollie’ decided to wait until he straightened up,” Keogh said.

“When he did, he probably didn’t level out like we thought he would. I think it was a fair run.”

In the Eclipse Stakes, trainers Tom Dabernig and Ben Hayes continued their winning run when they quinealled the event, with So Si Bon ($10) beating stablemate Power Scheme ($15) by a nose.

Hayes said So Si Bon had had a frustrating campaign but had been knocking on the door and could back up in next Saturday’s Ballarat Cup.