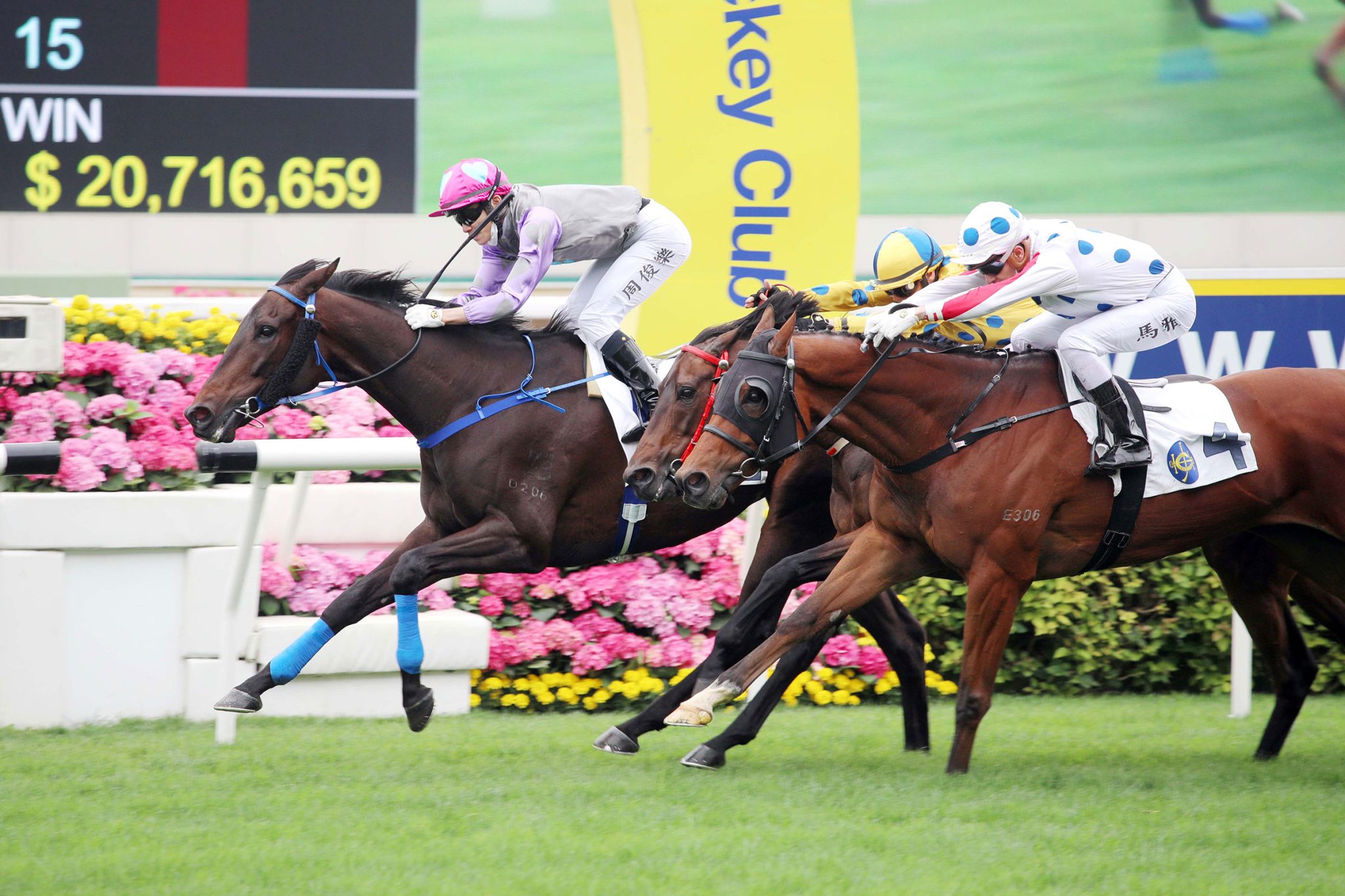 Delivering a reminder of talent and ambition, Jerry Chau shared riding honours at Sha Tin on Sunday (27 March) with Joao Moreira to keep alive hopes of snaring the Tony Cruz Award as Hong Kong’s leading local jockey with a double.

Returning to the fray after missing Wednesday’s (23 March) Happy Valley meeting, Chau boosted his season’s tally to 24 to remain entrenched in a cluster of Tony Cruz Award contenders, along with Vincent Ho (32), Matthew Chadwick (30), Matthew Poon (24) and Derek Leung (23).

Moreira matched Chau’s haul with a brace to trim Zac Purton’s lead in the jockeys’ championship to three – 95-92 – as Frankie Lor and Ricky Yiu posted doubles.

With five winners from 12 starters this week, Lor has moved to within three wins of 11-time champion John Size in the title race and trails 61-58 after 57 of 88 scheduled meetings.

“It’s good to get winners,” Lor said, following up on his Happy Valley treble on Wednesday (24 March) with the wins of Beauty Live and My Ecstatic. “Always happy with winners.”

Moreira closed the meeting with victory on Lor’s Beauty Live and was clearly impressed with the Shamus Award four-year-old, who now boasts three wins from five starts.

“He is still learning what racing is about. He’s still green and immature – and that’s a good sign because it means you’ve got a horse who can still improve and that’s what we’re looking for,” the Brazilian said.

“He’s a very nice horse with a bright future going forward. I would say we are still very far away from getting him to his top rating.”

Chau logged a double when My Sugar led throughout to win the Class 2 Cheung Shan Handicap (1600m) for Jimmy Ting after Flying Season posted a gaping four-length victory in the Class 3 Kwai Fong Handicap (1000m) for Manfred Man.

“Very happy to be back and to get two winners. Flying Season keeps on improving and he’s doing everything well now,” Chau said. “In the beginning, he jumped slow and did things wrong, but now he’s changed a lot.

“My Sugar jumped fast today and he relaxed well and was strong at the finish.”

Ting, who improved his seasonal tally to 24 with My Sugar’s fifth Hong Kong success, said: “His health is now better. Today, he is very lucky because some horses from Conghua were scratched and then the favourite (Beauty Joy) was scratched.

“You cannot run this horse too much because of his health, but it’s good to win.”

“These two horses can help me a lot,” Man said after posting his 23rd win of the campaign.

Lor’s My Ecstatic returned to the winner’s circle for the first time since April 2021 when Derek Leung drove the All Too Hard gelding to victory in the first section of the Class 4 Shek Wai Kok Handicap (1400m).

It was the chestnut’s second success in 19 Hong Kong starts.

Campione led virtually all of the way to narrowly prevail in the Class 3 Kwai Shing Handicap (1200m) for Luke Ferraris and Tony Cruz, providing a reminder of the talent which carried the gelding to Group 3 success in Italy where he was known as Windstormblack.

“I love this horse, he’s got a great character and he’s a pleasure to work with,” Cruz said of the Brazen Beau gelding.

The four-time champion managed to have the four-year-old a horse off the fence and midfield before producing the bay with a decisive turn of foot.

Blake Shinn produced an outstanding ride to prevail on Go Go Sixteen in the Class 5 Tai Wo Hau Handicap (1600m) to continue a flourishing relationship with Francis Lui. Shinn and Lui have combined on five occasions this season for two wins.

“I haven’t had much of an opportunity to ride for Francis because he uses Vincent (Ho) and Zac (Purton) when he’s available, so it’s great to get a few more rides,” Shinn said, after notching his 22nd winner of the campaign.

“Recently, I’ve been lucky enough to ride Universal Go Go to win at Happy Valley and then to pick up the ride on The Irishman (fifth) in the Hong Kong Derby, so it’s great to win again for Francis.”

Moreira coaxed the best out of Hong Kong International Sale graduate (ISG) Robot Warrior to land the Class 4 Shek Yam Handicap (2000m) for Yiu. Placed in four of 12 previous starts, the Sepoy gelding was given a comfortable run off the speed before emerging late to run clear.

Yiu sealed a double when Super Dynamite broke through at his 10th start in the first section of the Class 3 Lai King Handicap (1400m) under Vincent Ho.

“Both these horses have taken time and patience,” Yiu said. “Robot Warrior is an ISG horse who, even when he was a four-year-old, was very weak and he’s needed time to get stronger.

“Super Dynamite, I liked his form in Ireland (where he was known as Confidence High) but he’s taken time to acclimatise to Hong Kong.”

Dennis Yip’s Maximize Heart extended the recent strong run of ISG performances by storming to victory in the second section of the Shek Wai Kok Handicap (1400m) under Ruan Maia.

A son of Holy Roman Emperor, Maximize Heart lodged his second win in four starts over the course and distance for Yip, who has prepared 17 wins for the season.