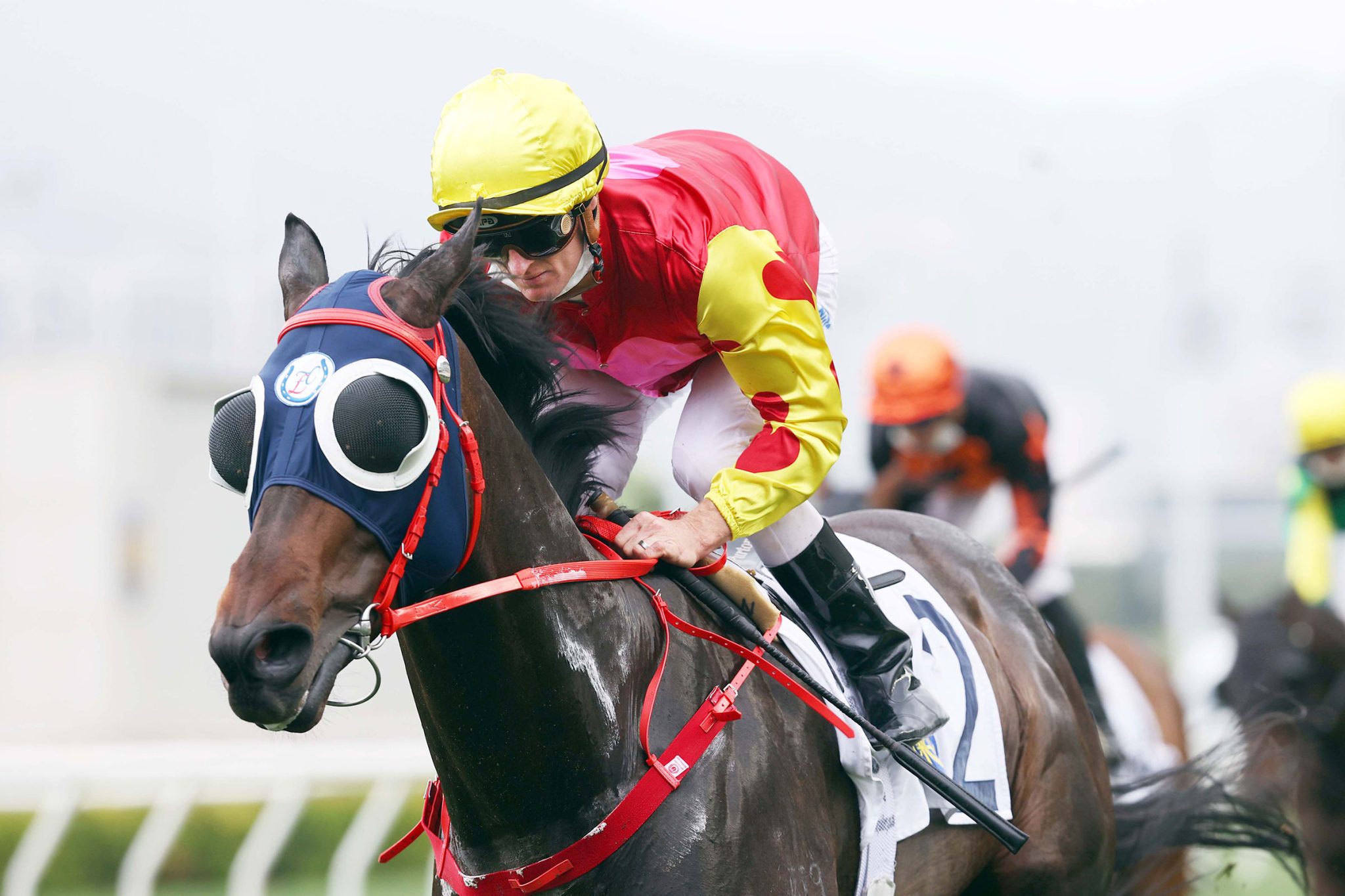 The rollercoaster tussle for the Hong Kong jockeys’ championship continued at Sha Tin on Saturday (April 16) when a treble propelled Zac Purton back into the lead as former Italian galloper Campione continued an impressive emergence for Tony Cruz.

Trailing Joao Moreira by two wins before the meeting, Purton edged to a 104-103 buffer after success on Red Brick Fighter, Run Run Cool and Blotting Paper while Campione underlined his quality with an excellent performance under Matthew Poon in the Class 3 D’Aguilar Peak Handicap (1200m, dirt).

Jumping from the outside gate of 12, the son of Brazen Beau surged to the lead and was never headed, improving his record to two wins from three starts after an unbeaten Italian career highlighted by three gaping wins when he was known as Windstormblack.

“He’s one of my favourite horses in my stable. He’s got a fantastic attitude, no-one can believe how quiet he is and you can talk to him and he understands you,” Cruz said.

“In Italy, he’s been winning races all the time like this, we had to send him forward.”

Frankie Lor is bearing down on a season’s-best haul after Run Run Cool toppled talented Flying Season to land the Class 3 Cheung Lin Shan Handicap (1000m) to provide Purton with the second leg of his treble.

Run Run Cool’s second straight success over the speed course catapulted Lor to 63 wins for the term – just two shy of his previous best score of 65 and only one win behind former mentor John Size, who has 64 for the season.

“My boss also – and me, too – will try hard to win the championship and we still have three months to go in the season,” Lor said.

Fownes, marking his 999th Hong Kong triumph, said: “His last run was really good, he got second. I was happy with his win today, he trailed up three-wide and was strong the last 100m. We believe he can get into Class 3 and be competitive now.”

“He’s been knocking on the door for quite a long time. I think the difference between Zac and his colleagues – he does win a lot of races – but his greatest skill is that he makes everything look easy,” Gibson said.

“I thought it was a very well-timed, skillful ride. I though Zac controlled the tempo and made it look easy when it wasn’t easy.”

August Moon extended an excellent campaign by landing his third race of the season with victory under Derek Leung in the Class 4 Pottinger Peak Handicap (1200m), delighting trainer Paul O’Sullivan.

“He’s had a very good season. What a difference a barrier draw makes. He drew wide last start (barrier nine), boxed on and ran well for fourth. He probably didn’t run any better today, but drew a gate (barrier two) and did it well,” O’Sullivan said.

“Some of these horses take that much time to get used to the tracks, the tempo of races and the dynamic conditions.”

David Hall and Purton combined successfully for the ninth time in 43 starts this season when Red Brick Fighter proved too strong despite covering ground to land the Class 5 Windy Gap Handicap (1400m).

A son of Artie Schiller, Red Brick Fighter had fallen to 39 in the ratings from a career-high of 52 at the end of last season. He now boasts four wins from 34 starts.

Harry Bentley claimed his 18th success of the campaign as Perfect Maryknoll cruised to victory in the Class 4 Violet Hill Handicap (1800m) for Benno Yung, who has 31 wins for the season.

Describing six-year-old So We Joy as an “old man” after his triumph in the Class 3 Mount Butler Handicap (1650m, dirt) under Vincent Ho, Michael Chang will keep the So You Think gelding on the all-weather track to extend his career.

“He seems to like the all-weather track, so I’ll keep him going on the surface – either 1650m or 1800m,” Chang said after slotting his ninth winner of the season. “He’s the old man, but it was a good win today.”

Third in the 2019 Group 1 Irish 2000 Guineas (1600m) at The Curragh, Decrypt struck for the first time in Hong Kong when the grey stormed home to win the Class 3 Ma Kong Shan Handicap (1400m) for David Hayes and Antoine Hamelin.

“He’s a horse that the owners have had to be so patient with, so all credit to them,” Hayes said, referencing the gelding’s first success at his 19th run in Hong Kong. “He’s had a bowed tendon and he’s got a disliking for the firm tracks.

“The jockey rode him superbly and he reported after the last start that the horse was a bit fresh, so we poured the work into him and he’s responded. Hopefully he can go on with it because he’s off a great mark (69) for a horse of his class.”