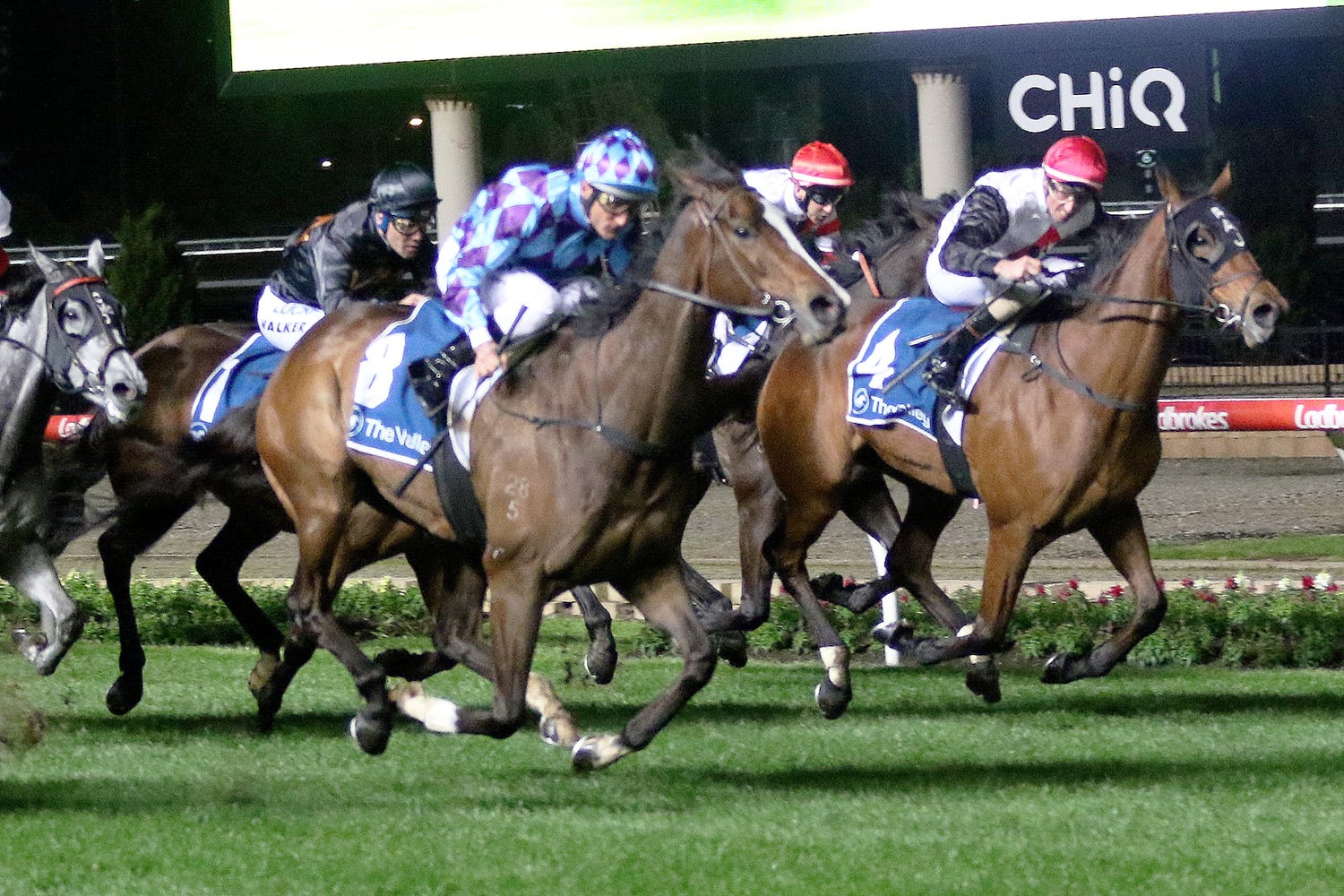 A slashing run for second in Friday’s Group 2 Stocks Stakes (1600m) at The Valley was just what the doctor ordered for trainer Roger James and his quality mare Rondinella.

James, who prepares the five-year-old Ocean Park mare at Cambridge with training partner Robert Wellwood, was keen to see just how his charge would handle the unique Moonee Valley track as well as her first attempt at racing under lights. After being held up at a vital stage approaching the home corner, Rondinella saw daylight a fraction too late as she charged through a gap to finish second to Group 1 winner Princess Jenni.

James was delighted with the run which was the mare’s second in a campaign that has the iconic Group 1 Cox Plate (2040m) back at The Valley on October 26 as her main aim. “I thought she went very well and might have even won with a little more luck around that top bend,” James said. “She just lost her momentum when she was held up and by that stage the winner had a full head of steam out wider.

“It’s certainly no disgrace to finish behind Princess Jenni as she is a high-class mare. “All in all, you have to be pleased with the outcome as she handled the track really well at her first look at it and she was also good under the lights which was also a new experience for her.”

James was pleased with Rondinella’s post-race recovery as he looks towards her next start before tackling the Cox Plate. “She was a little tight on Saturday, which was to be expected, but nice and free in her action,” James said. “The race will do her the world of good as she had just had the one run on a very deep track at Ellerslie before coming over and you never quite know what their fitness levels are like when you have to do all the prep work on the wet tracks we have back at home.

“She will have one more run before the Cox Plate but I’m not sure where that will be just yet. “I’m going to have a chat to the handicapper first but she could line up at weight-for-age over 2000m (Group 1 Ladbrokes Stakes) at Caufield in a fortnight or the Coongy Cup (Group 3, 2000m) there four days later.”

Should James choose the Coongy Cup for Rondinella she could clash again with fellow New Zealand mare Consensus, with the Stephen McKee-prepared eight-year-old a gritty fifth behind Princess Jenni on Friday after racing three-wide for most of the 1600m journey.

Kiwi trainer Tony Pike was another who left The Valley on Friday night with plenty to be pleased about despite class sprinter The Bostonian only finishing ninth in the Group 1 Moir Stakes (1000m). Forced to race wide throughout after jumping from barrier 13, The Bostonian caught the eye as he made up good ground in the 1000m dash to finish within two lengths of eventual winner, Nature Strip.

“It all pretty much went wrong from the get-go,” Pike said. “He jumped well but couldn’t get across so he went back and still ended up four wide. “He got shunted out even wider turning for home so to finish as close as he did was a super effort. “He pulled up well so he is most likely to have a go at the Schillaci Stakes (Group 2, 1100m) at Caulfield on October 12 next. “We will monitor the track as he doesn’t want it too firm but as long as he draws a barrier and the track comes up to his liking he will be in with a good show.”

The winner of the Schillaci Stakes will be offered the slot held by the ATC and MRC in the A$14 million The Everest (1200m) at Randwick on October 19.