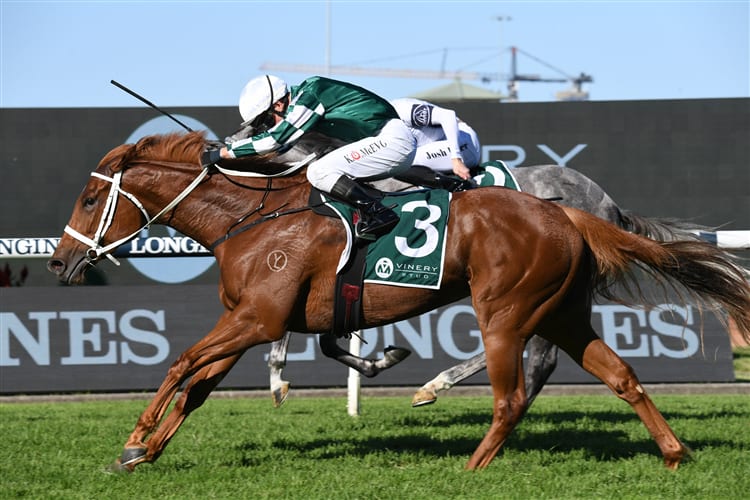 Some self-talk midway through the Vinery Stud Stakes has driven Kerrin McEvoy to produce a gem of a ride on Hungry Heart and claim the Group 1 fillies’ feature in an epic finish.

As Harmony Rose made the running, McEvoy found himself among the tailenders and spotting the favourite a big start.

He admits there were some anxious moments and it didn’t get any better when Harmony Rose skipped away in the straight.

“We wanted to try to be a bit closer but that was the only spot I could get comfortably,” McEvoy said.

“But I was worried the whole way. I said to myself at the 1000, ‘stop worrying about that now, you’ve got the race to worry about’ and then they went a bit quicker and she picked up.”

Hungry Heart won the Sweet Embrace Stakes as a juvenile but it was another 12 months until she was back in the winner’s stall, claiming the Phar Lap Stakes last start.

Trainer Chris Waller said the confidence she gained from that victory was invaluable.

“I think that win last start was a big help and, to me today, that last 100 metres she could’ve easily run second, but she really stuck her head out and tried her guts out,” Waller said.

Waller was unsure if Hungry Heart would progress to the Oaks but Mark Newnham confirmed Harmony Rose would head to the fillies’ classic after her brave effort for second.

McDonald has had a tough couple of weeks, relinquishing the winning Golden Slipper ride on Stay Inside and he had been the regular rider of Hungry Heart before switching to Personal.