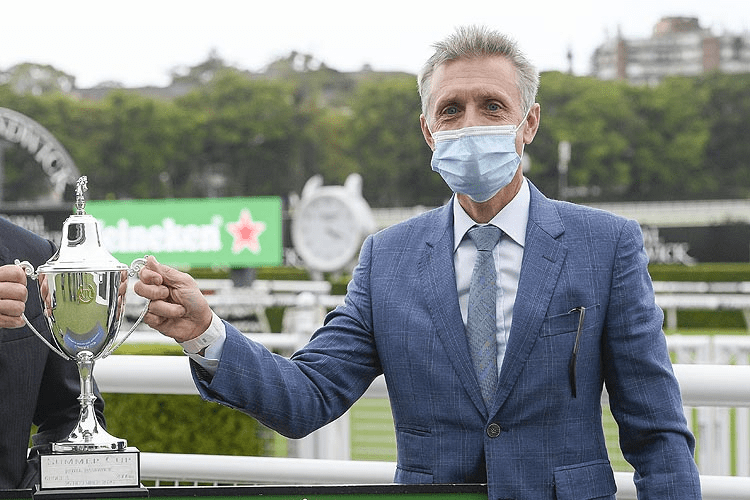 There are no aspirations for Miravalle to have a career as a hurdler but the decision to add some jumping to her training regime has put her back on a path towards the Australian Oaks.

The Arrowfield Stud-owned filly showed promise as a spring three-year-old when her efforts included a closing fourth in the Wakeful Stakes, but she lacked a knockout punch.

After she failed to get into the race when finishing down the track in the Surround Stakes first-up, trainer Mark Newnham opted to spice up her workload by putting her over some jumps.

He was instantly rewarded when Miravalle scored a determined win in the Kembla Grange Classic to earn her place alongside stablemate and pre-post favourite Harmony Rose in the Group 1 Vinery Stud Stakes (2000m) at Rosehill on Saturday.

“Generally, she is a laidback, lazy worker but it has actually pepped her up a bit,” Newnham said.

“She pushed out and showed a bit of tenacity last start.

“She attacked the line and that’s what she hasn’t been doing, but I also think she was advantaged getting back on good ground as well.”

Harmony Rose heads into the traditional Oaks lead-up following a brave third behind Lion’s Roar and Mo’Unga over 1600 metres in the Randwick Guineas, a form reference franked by the latter’s subsequent Rosehill Guineas win.

She has had a barrier trial to keep her up to the mark, drops back to fillies’ grade and Newnham expects Harmony Rose to relish the extra journey.

“She is still on the rise, Harmony Rose. She pretty much came from a midweek win to Group One company, that’s a fair jump and she did a bit of work midrace,” Newnham said.

“I was pleased with her trial and she has come on nicely. I think she will eat up 2000 metres.”