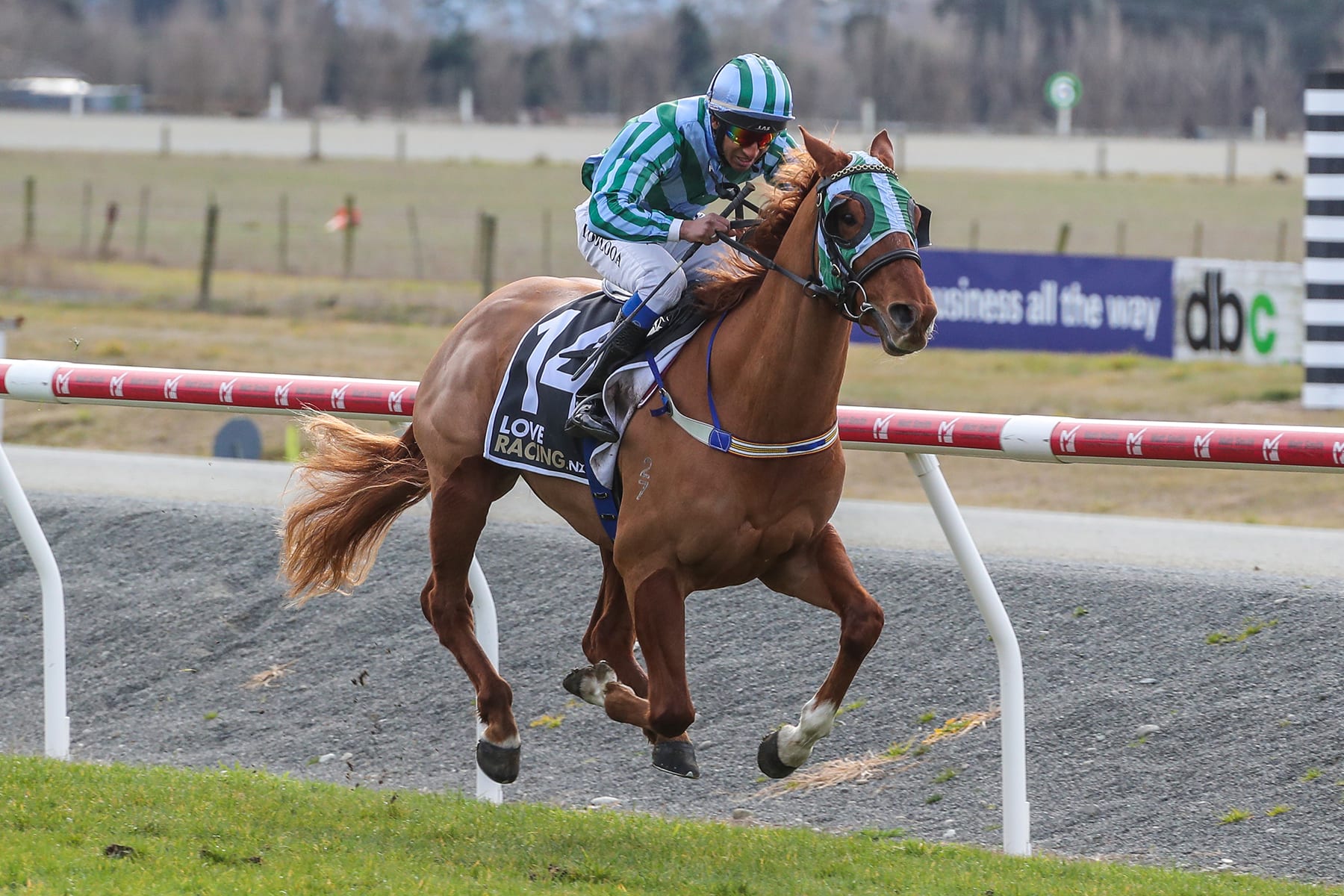 Impressive triallist Show Bazz made an eye-catching debut when he trounced his maiden rivals over 1200m at Ashburton on Saturday. The Showcasing three-year-old had won a 1000m trial at Motukarara back in January and backed that up post the COVID19 lockdown with another comfortable victory at Rangiora in June over 850m.

Co-trainer Kevin Hughes, who prepares the gelding with wife Pam, wasn’t keen to line his charge up on the heavy surfaces presented at their home base at Riccarton in recent weeks, preferring to wait for the Dead6 on offer at Ashburton. Handled confidently by stable apprentice Sanu Toolooa, Show Bazz settled comfortably behind the pace before hugging the rail around the home turn to join issue with the leaders.

Toolooa hardly had to ask for a serious effort as Show Bazz strode clear and delivered a comfortable one and a quarter-length victory over race favourite Pete with Exclaim close up in third. “You always hope that this is what they can do for you but against the older horses you never know,” Hughes said. “It was a very good effort as he seemed to work away from them quite comfortably without being asked to do too much, he looked like he was just playing with them. “I was surprised how easily he did it and Sanu said when he got into the clear he just changed gear. “We didn’t start him at home as it has been too heavy for him so we came here for the better track and it worked out nicely.”

Show Bazz was purchased by owner Barry Thomas CNZM for $95,000 from the draft of his co-breeders Trelawney Stud at the 2019 NZB Ready To Run Sale, with Hughes believing he got a real bargain. “We got a bit lucky when we bought him as we were just sitting there after a couple of high-priced lots had gone through the ring,” he said. “There was a bit of a lull in the sale so we got him at a really good price as I did expect to have to pay a bit more for him.”

With a maiden win on the board Hughes will now map out a plan for Show Bazz aimed at getting him to the Group 1 New Zealand 2000 Guineas (1600m) in November, a thought he has had in mind for the horse since his first trial win. “We’ve thought all along he could be quite a good horse so we were hoping he would show that today,” he said. “Now he has had that win we can look at how we get him to the 2000 Guineas as the main aim.

“There are quite a few three-year-old races coming up at home over the next month while we could always come back to Ashburton for the Barneswood Farm Stakes (Group 3, 1400m) in October. “I’ve always thought he could get a mile so that’s why we are going to aim high for a race like the Guineas and see how we go.” Show Bazz is the fifth foal of unraced mare The Iffraaj Dame, a daughter of multiple stakes winner La Bella Dama who numbered the Group 1 MacKinnon Stakes (2000m) amongst her seven career victories.