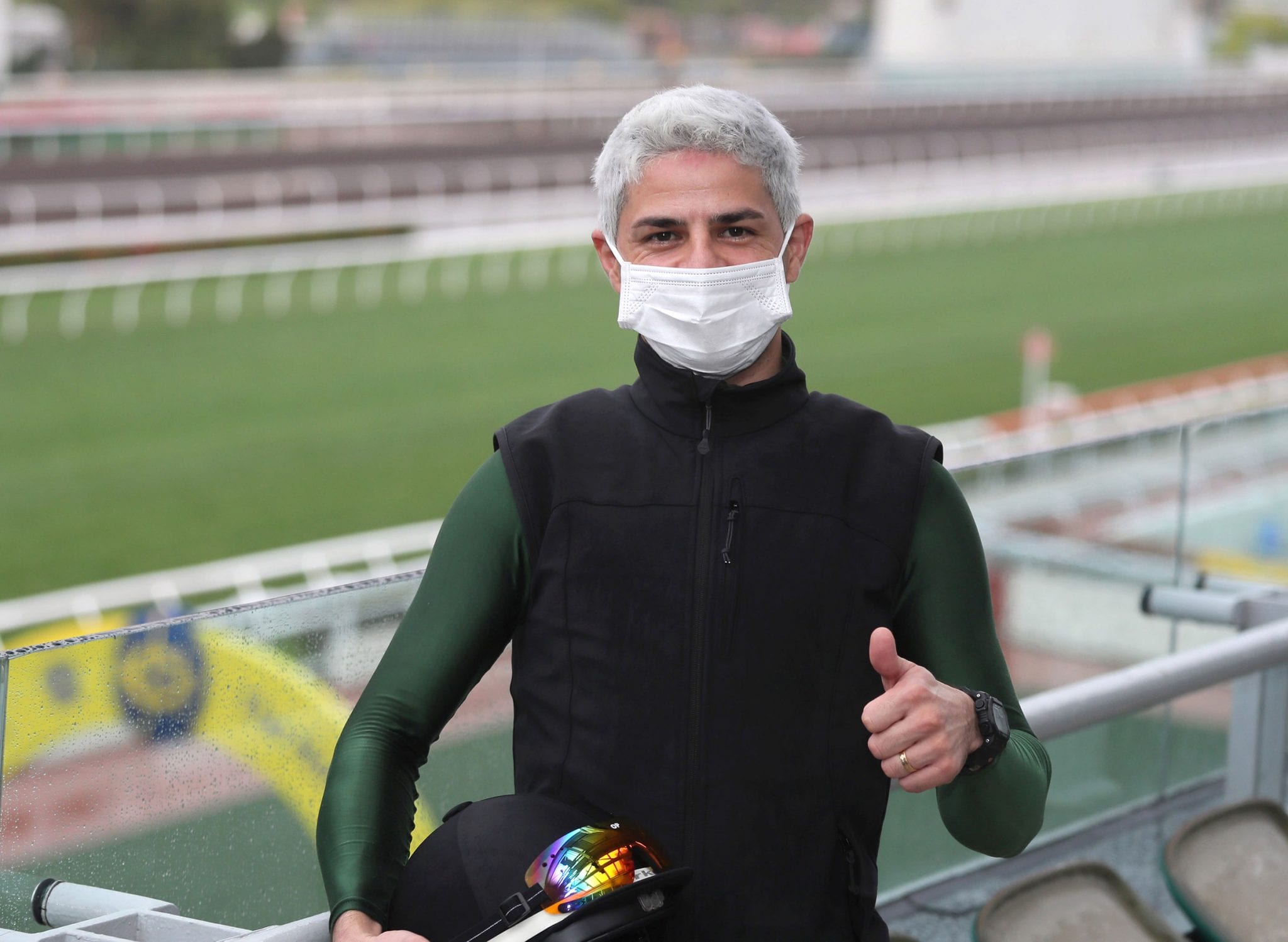 Brazilian jockeys have made waves in Hong Kong in recent years and Ruan Maia is looking forward to rising to the challenge when his licence to ride in races commences this Sunday, 28 February at Sha Tin.

A two-time champion jockey in his first two seasons in Macau (2017/18 and 2018/19), Maia, who finished second in Singapore’s championship last season, stressed yesterday morning (Thursday, 25 February) as he faced the press that his being here was the fulfilment of a long-held “dream”.

And, a blueprint set by three-time Hong Kong champion jockey Joao Moreira has helped the 32-year-old forge his way to the challenging cauldron of Hong Kong racing, via Macau, but just like Moreira having reaped instant success in Singapore.

“The plan was to get to Hong Kong – I have known Joao Moreira since he started his apprenticeship back in Brazil before he went to Singapore and came to Hong Kong, and this is what I am doing for me – I am very grateful for the opportunity that both Macau and Singapore gave me because now my dream has come true,” Maia said.

“To me Hong Kong racing is the best in the world and I’m just grateful for the opportunity – I will try my best and keep looking forward – I’m very excited,” he added.

Maia joins Moreira and fellow countryman Vagner Borges as the third Brazilian currently riding on the Hong Kong Jockey Club’s roster. He arrives with over 600 wins under his belt, including big-race successes in both Macau and Singapore, notably claiming the 2018 MAC Group 1 Macau Gold Cup (1800m) aboard River Control and the 2019 MAC Group 1 Chairman’s Challenge Cup (1200m) aboard Mister Kaopu.

“I think the key is to work hard, try your best and always keep learning because I believe every day you can learn something new,” Maia said.

“Every day I try to learn by watching jockeys – I never giving up on myself because I know I can learn more,” Maia said.

He rode a career-best haul of seven winners in a single fixture last August at Kranji and he finished his first campaign in the Lion City with 62 wins at a win strike rate of 17.7%, firmly sealing second in the championship.

“In Macau, my previous best was four winners in a day, when it happened in Singapore it was just amazing.

“Joao (Moreira) text me and he said enjoy this moment because you deserve it,” Maia said.

Moreira won eight races from eight rides at Kranji in September, 2013 before arriving in Hong Kong the following month to finish second in that year’s championship with 97 wins.

But, before his exploits in Asia, it all began for Maia back in Brazil on the back of his father’s farm horses.

“When I was a kid my father had farm horses so I started to ride them and then after that I met an owner from Curitiba who asked me if I wanted to try and become a jockey.

“I went to look and see what horse racing was all about and I just thought it was such an amazing profession, and then I began my apprenticeship in Curitiba, the same place as Joao Moreira,” Maia said.

“He went through before me and after that I moved to Sao Paulo – that’s when I became a senior rider,” he added.

And, Maia, who speaks Portuguese, has put in the hard yards along the way to absorb the English language.

“It’s very important for a jockey (to speak English), because trainers or owners have more confidence listening to you talk about the horse in English.

“For Brazilian jockeys it’s very hard to learn English because when you move out you don’t speak the language, but every day I do my best to learn more – Macau and Singapore both helped me,” Maia said.

“Right now I can ride 118 pounds because I don’t want to put too much pressure on myself after 21 days in quarantine – it’s not easy when you need to drop weight, so I will start riding 118 pounds but in a few weeks I will be comfortable at 116 pounds,” Maia said.

Maia will kick off his campaign this Sunday with eight rides at Sha Tin and is looking forward to being in the thick of the action, rather than watching from afar in mandatory hotel quarantine.

“I was lucky, the Hong Kong Jockey Club put a treadmill in the room for me so that I could run every day to keep my fitness up and maintain my weight, so slowly I got through it – I’m feeling well now to start work,” Maia said.

Maia is licenced until the conclusion of this season, and his first ride comes in the opener this Sunday (28 February) aboard Who’s Horse for trainer Tony Cruz in the Class 5 Yuen Shin Handicap (1200m).