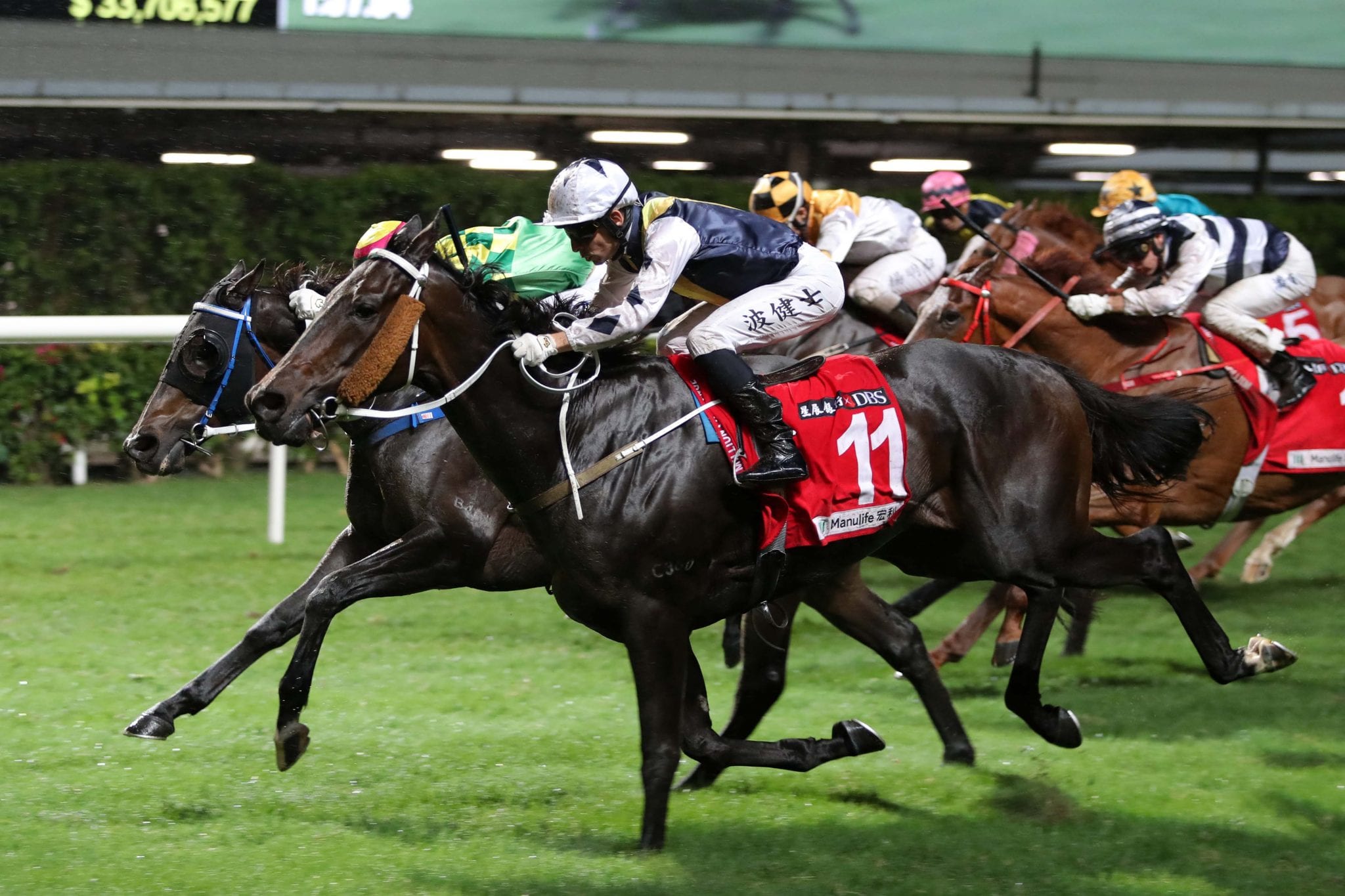 Vagner Borges edged closer to a berth in next month’s LONGINES International Jockeys’ Championship (IJC) with his 11th win this term thanks to a sweeping success aboard Sunshine Warrior in the Class 2 Cheung Hong Handicap (1650m) to seal a Tony Cruz treble at Happy Valley on Wednesday, 18 November.

With the LONGINES IJC featuring six international riders and six Hong Kong-based jockeys this year – a change from the usual format of eight overseas riders to Hong Kong’s four – the door is ajar for the next two eligible riders on the jockeys’ premiership table to participate, with Borges and Alexis Badel (15 wins) currently filling the coveted spots, while Jerry Chau (16 wins) who sealed a double tonight, is ineligible as an apprentice.

The HK$800,000 LONGINES IJC is the world’s most prestigious jockeys’ challenge, and, aided by five wins from the last six race meetings, Borges’ recent run of form could see him rewarded with selection and the chance to compete against some of the biggest names in world racing.

“I’m very happy with the results I’ve been getting – I’m getting more confident and adapting to both of the racecourses also – I’m quite satisfied about that,” Borges said.

The cut off is the conclusion of next Wednesday’s (25 November) race meeting, and hot on Borges’ heels is Chad Schofield (10 wins), while Irishman Neil Callan shifts up thanks to double tonight to join Matthew Chadwick on nine wins with two race meetings still to play out.

But tonight, Borges’ sole victory came in the feature, the highest class and most valuable race, against a hot field of 10 others. It was also his first win for trainer Tony Cruz.

“Vagner (Borges) is doing a good job, that’s his first win for me and I hope he can ride a few more,” Cruz said.

The Pierro gelding stepped slowly out of the gates, but a cool, collected Borges kept his head, settled his mount, and then peeled for the stand-side as he turned for home. The Brazilian hit the front with 25m to go, for a head victory over Green Luck, denying fellow countryman Joao Moreira a hat-trick.

“He didn’t have a good jump but he travelled nice and handy so he was able to get there in the end,” Borges said.

Cruz added: “I expected this horse to run a big race, he has a big heart and I know he had the inside draw, which was a big help, I knew he was going to come home strong.”

The Australian-bred grabbed his fifth Hong Kong win at his 21st start, his third over the course and distance.

Moreira, denied a treble, bagged two wins in mirror image fashion – from the front. He sealed his pair aboard Wild West Wing in the Class 4 Hing Man Handicap (1000m) for trainer John Size.

“He’s been improving each time he goes out there to race and that wasn’t difficult for me as a jockey, to be honest. I just had to use his gate speed that he has got and make use of it,” Moreira said.

“All prize goes to John Size though: he is a champion trainer and riding his horses makes my life as a jockey much easier.”

The three-time Hong Kong champion extended his lead atop the jockeys’ premiership to 36, stretching 13 clear of Zac Purton who remained joint-second with Karis Teetan on 23 wins.

Moreira’s first all-the-way success came in the opener, section one of the Class 5 Wah Fu Handicap (1200m) aboard the Me Tsui-trained Master Galaxy.

Neil Callan secured his second double in as many meetings at the city circuit, sealing his brace with a gritty success aboard Fast Pace, who stubbornly fought back after being headed in the home straight to land the first section of the Class 4 Shun Lee Handicap (1650m).

“He’s a nice horse, he’s got a lot of raw ability; Caspar’s (Fownes) done a lot of work with him, when he first came in with his first few runs he was flipping in the gates, going mad,” Callan said.

The Savabeel gelding grabbed his first Hong Kong win at his sixth start, putting two previous misdemeanours in the gates behind him. The Hong Kong International Sale graduate’s exploits in the stalls have twice resulted in his withdrawal due to self-inflicted lameness after playing up.

“He’s been withdrawn a few times, he wears a pacifier to just try and calm him down, because the ability is there and he just needs to just take a chill pill and hopefully more racing will do that for him,” Callan said.

Callan indicated that the 48-rater has further improvement to come: “He has more ratings points in hand and he’ll probably get a little bit further in time but he definitely has a bit more to give.”

The win of Fast Pace was the first of two for championship leading trainer Caspar Fownes, who edged to 25 seasonal wins thanks to fellow Hong Kong International Sale graduate Guy Dragon’s thrilling success in the nightcap, the second section of the Class 3 Fu Cheong Handicap (1200m) with Alexis Badel up.

Callan earlier kicked off his pair with victory aboard the Cruz-trained Sunny Lad in section two of the Class 4 Shun Lee Handicap (1650m). The Sepoy gelding was a two-time winner in Britain prior to export when under the care of John Gosden.

Jerry Chau also bagged a double, capping it with a win aboard the Cruz-trained Mig Energy in the first section of the Class 3 Fu Cheong Handicap (1200m).

“The horse (Mig Energy) relaxed and on the turn he travelled well, I found room and when the gap opened he dashed home really well,” Chau said.

Blake Shinn nabbed his fourth win this season and his first for trainer Tony Millard with an accomplished ride aboard Strathclyde in section two of the Class 5 Wah Fu Handicap (1200m).

“Full credit to Tony (Millard) he had the horse just in a wonderful frame of mind going to the barriers and I was really happy with how he felt even before the race – I was quietly confident,” Shinn said. “It was just a matter of utilising the good draw, gate two, and we were able to do that.”

Hong Kong racing continues on Sunday, 22 November at Sha Tin with a trio of Group 2 contests for Jockey Club Races in the lead-up to next month’s LONGINES Hong Kong International Races on 13 December.