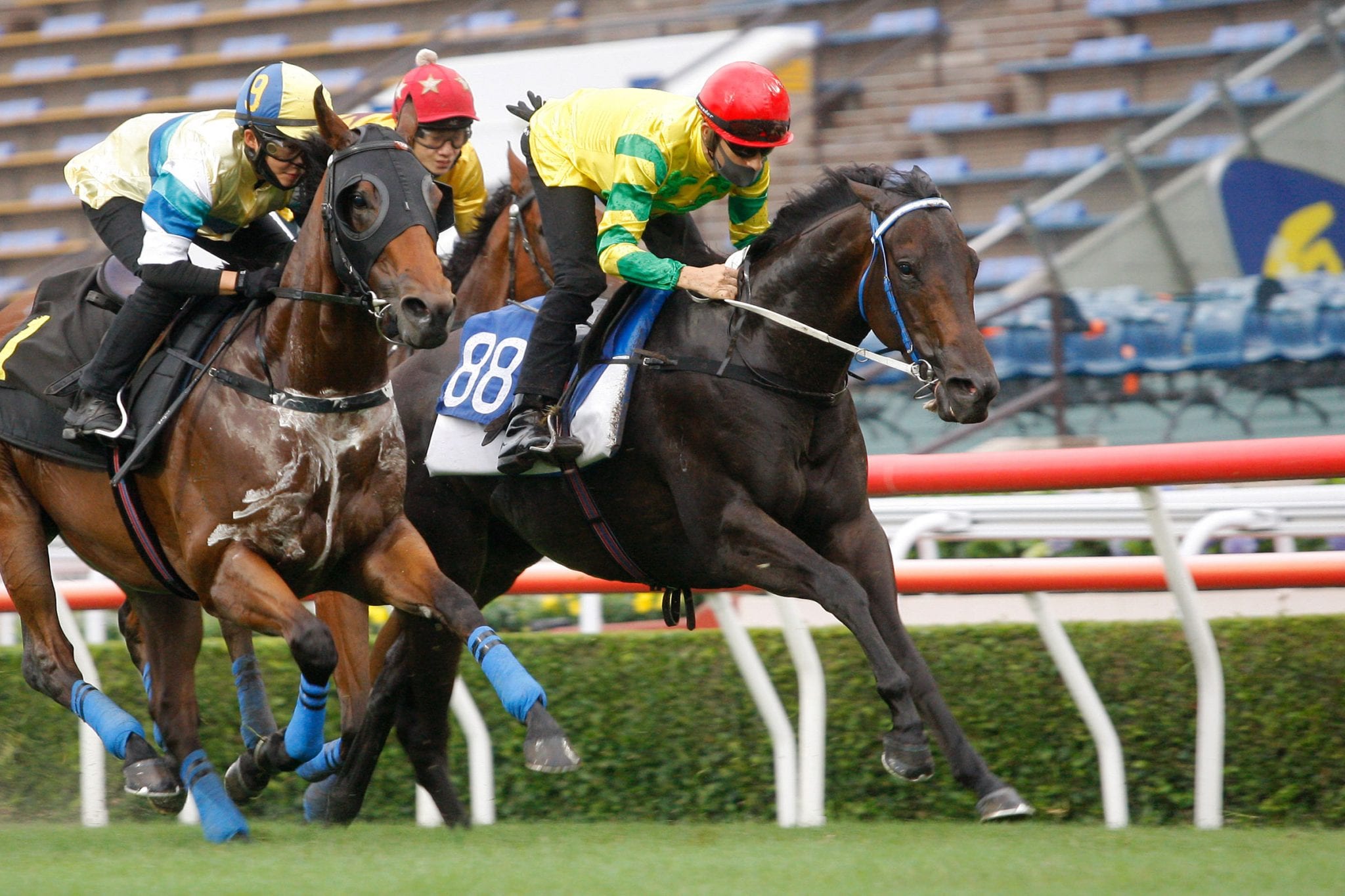 Sky Darci stepped onto the turf at Sha Tin this morning (Tuesday, 4 May) for the first time since his Hong Kong Derby (2000m) triumph in March as he builds towards his much anticipated return in the Group 3 Lion Rock Trophy Handicap (1600m) at the end of this month.

Readying for the HK$3.5 million contest on 30 May, the son of Darci Brahma crossed the line third in this morning’s barrier trial behind the unbeaten Winner Method, who clocked 57.61s down the 1000m straight, while Californiadeepshot filled second.

Much to the delight of jockey Joao Moreira, the New Zealand-bred broke cleanly and was steadily eased to the rear before meandering through the field with a bit of swagger.

“He was fine, he just went out for a piece of exercise among horses, he jumped brilliantly as usual, he relaxed nicely and he came through the field travelling on the bridle, he was only out there for an exercise, not to be tested and he’s done it very well,” Moreira said.

Following his triumph in the HK$24 million contest two months ago, the 106-rater spent has enjoyed a short stint at Conghua prior to returning to Hong Kong on 30 April, much like he has done for the most part of his 12-start career.

“I think the break was what he deserved anyway because he has done an amazing job throughout the season, he’s won four races including the Derby,” the Brazilian said.

Crowned by his Derby triumph, the bay has six wins to his name in Hong Kong, including a Class 1 score over the mile in the Chevalier Cup Handicap earlier this season and the following start he finished second to Champion’s Way in the Group 3 Chinese Club Challenge Cup Handicap (1400m).

“I’m booked if he’s running because it’s still not 100 percent if he will run, if he keeps going the way he is at the moment then I think we should be running at the end of the month and I should be on him,” Moreira said.

First run in 2016, the Lion Rock Trophy is named after Lion Rock, a mountain that overlooks the back of Kowloon, 495 metres high, and it is a race that Moreira has previously scaled three times aboard Rapper Dragon (2016), The Golden Age (2018) and Champion’s Way (2019).

Tony Cruz is buoyant that a stint away at Conghua will help reinvigorate reigning Hong Kong Horse of the Year Exultant as he builds towards defending his crown in the Group 1 Standard Chartered Champions & Chater Cup (2400m) on 23 May.

“It’s a change of environment for him to see if we can get a different attitude out of him, he’s been at Sha Tin for too many years and he’s not performing now,” Cruz said.

The extremely consistent Teofilo gelding is yet to win from six attempts this season, having placed five times, including twice at Group 1 level, second to Mogul in the 2020 LONGINES Hong Kong Vase (2400m) and third to Golden Sixty in the Citi Hong Kong Gold Cup (2000m).

“He needs to perform in the Champions & Chater Cup, we’ll see then whether we carry on for next season with him or not that’s the question,” the handler said.

Last time out the 126-rater finished fifth in the Group 1 FWD QEII Cup (2000m) on FWD Champions Day (25 April), he was the first locally-trained horse home behind all four of Japan’s raiders: Loves Only You, Glory Vase, Daring Tact and Kiseki, respectively.

“The change of environment can change a horse’s attitude and behaviour, he’s always been a very calm type of horse but he’s going to do his time up there and hopefully return a fresher horse,” Cruz said.

After arriving to Conghua on 29 April, the HK$82.2 million earner has galloped on the dirt up there and is expected to trial too before returning to Sha Tin for his next assignment.

“The race is coming up so he won’t have much time, he’ll be up there for another week or so, the training environment and regime for him is similar to Hong Kong but this time he’s going to have a barrier trial up there instead before coming back down,” Cruz said.

The Irish-bred import has 11 wins to his name in Hong Kong including five Group 1s from 31 runs under the care of Cruz. A career highlighted by consistency, Exultant has only missed the placings five times across his career in Hong Kong.