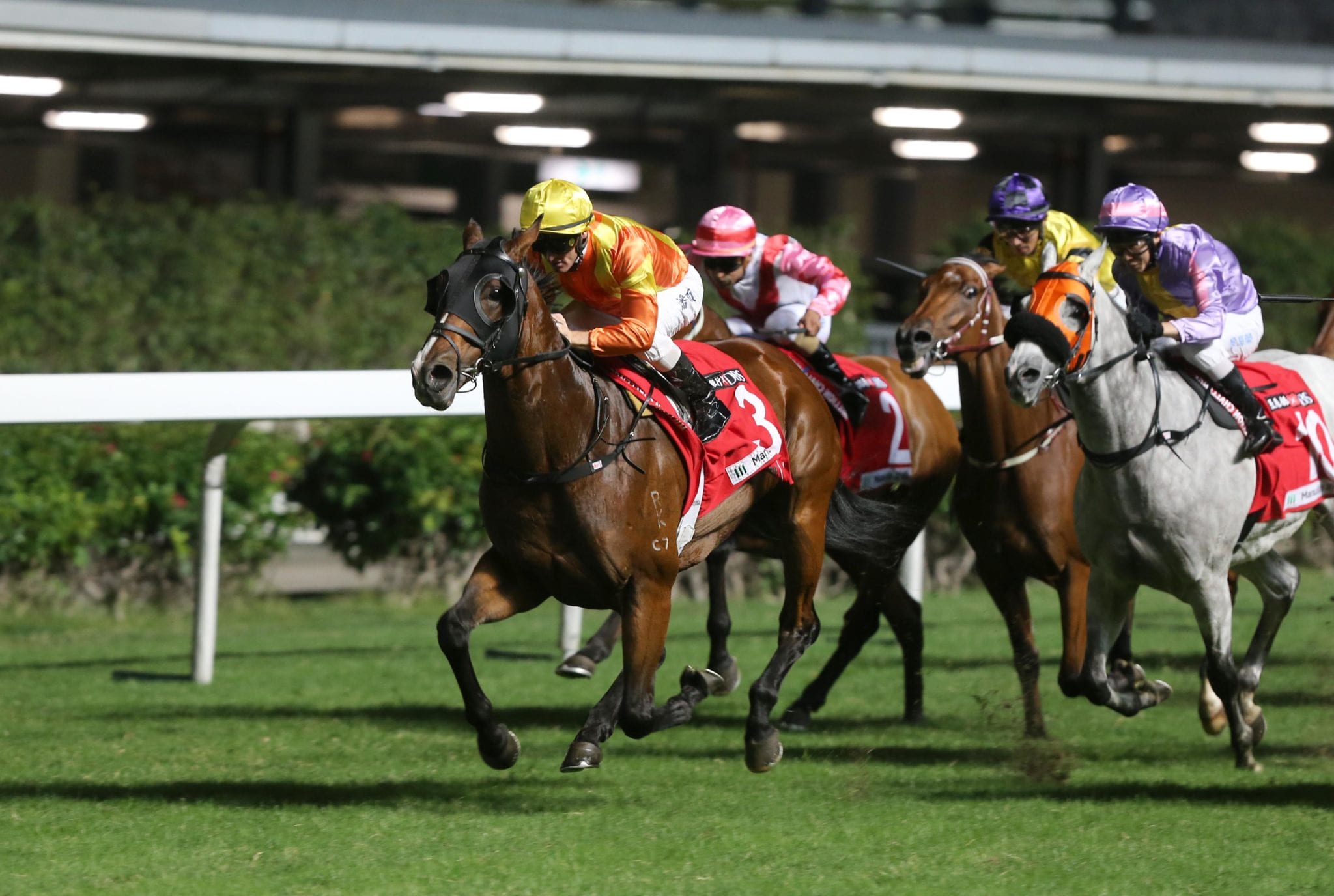 High Rev could be a plum ride for one of the star riders at the LONGINES International Jockeys’ Championship fixture after sealing a double for his trainer and jockey with another impressive display at Happy Valley yesterday evening, Wednesday, 6 November.

“The next run might be the jockeys’ series race on 4 December, an 1800-metre Class 2 here at the Valley. He’s in really good form and let’s hope he’s not done with yet,” trainer David Hall said.

“He’s a very well-bred horse so how far in distance he can get we’re going to explore yet but I’m sure he’ll get a lot further than 1650 (metres).”

The exciting five-year-old made it two wins on the trot under a confident Zac Purton in the Class 3 Jaffe Handicap (1650m). The champion jockey made a wide move down the back straight that took him from second-last and cruising to fourth and rolling at the turn for home.

“I said to David, I wasn’t going to take off tonight but I wasn’t going to be six lengths off them turning for home; I wanted to just track up and join in and do it when I wanted to do it and the horse did it. He’s a nice horse; he’s a stayer so he could easily continue on with what he’s doing,” Purton said of the 1.7 favourite.

High Rev (130lb) was always in command down the home straight and passed the post three quarters of a length clear of runner-up Charizard (127lb) in a time of 1m 39.88s.

“He’s done his job, it’s not easy to do, the track’s probably running pretty fast off the front; he’s had to come from well back, do all the work three deep, cart the field up and get the job done,” Hall said.

“It’s great to have Zac on in those sorts of races. He knows the horse really well now; he knows what he had underneath him and what he could get away with. You wouldn’t want to do that on every horse but he knows his job.”

The trainer was delighted with the progress the late-maturing son of Group 1 Australian Oaks heroine Invest has shown since late last season. Including a six and three-quarter-length score to round off that term – at his 11th start – High Rev has bagged three wins from his last four races.

“He was a real monkey before he was gelded and he was doing so many things wrong but you could see he had the talent,” Hall said. “He wasn’t switching on in the mind at all and we changed a couple things; being gelded kicked in and being ridden quietly he was able to find his rhythm and he really started to show what he can do.”

The Fastnet Rock gelding’s win took him to 30 points and equal top in the ongoing DBS x Manulife Million Challenge competition, which concludes on 26 February.

“He’s got a few points now in the Million Challenge too so we’ll stick to the Valley and see how he goes in his next one,” Hall added.

Hall and Purton teamed earlier on the card with Mr Picasso in section one of the Class 4 Harbour Handicap (1200m).

Mr Picasso (133lb) has been an honest servant to owner Allen Shi and the Hong Kong International Sale graduate picked up his fourth career win at his 30th outing.

The Exceed And Excel gelding topped the weights, having dropped down from Class 3, and benefitted from gate 2 and the services of Zac Purton to land the spoils by a neck from the fast-finishing Master Albert (117lb).

“He’s been running close enough in Class 3 for us to know he was going to be hard to beat; he’s been here before in these circumstances, with a big weight and Zac on, and he got the job done previously,” Hall said of the 3.3 favourite.

“He’s getting older but he was cherry-ripe for tonight and he got his win. There’s not much left in him so tonight was his night, I think.”