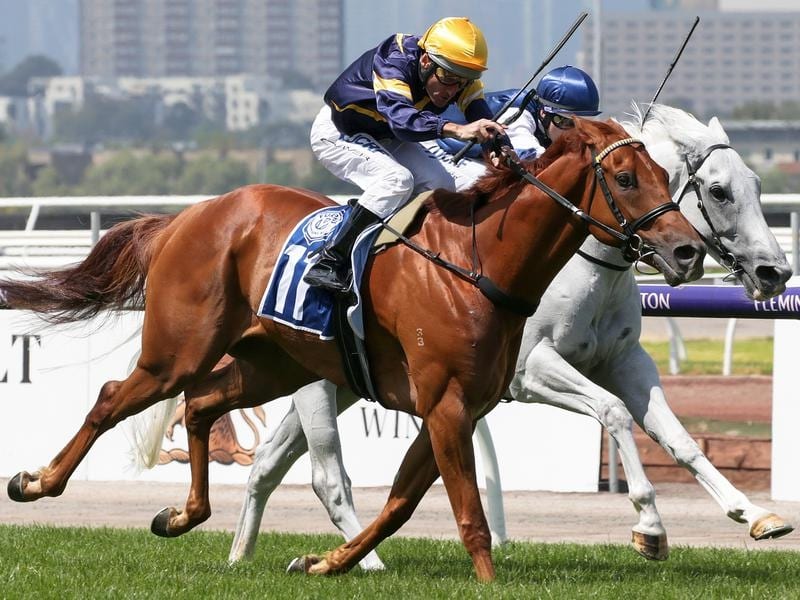 Trainer Mike Moroney believes Hang Man is knocking on the door of a win this preparation and hopes he can achieve it at The Valley on Saturday.

Hang Man is yet to win from four starts this preparation, registering two placings, but Moroney believes there was plenty of merit in the import’s most recent defeat over 2000m at Caulfield where he hit the front in the straight before being run down to finish third.

“He probably should have won his last start,” Moroney said.

“He got a torrid run. He drew the outside gate and had to do all the work up the hill and got caught three and four wide the rest of the trip facing the breeze.

“It was a fantastic run. I thought it was just about one of the runs of the day because he only really got beaten in the last 50 metres.

“He faced the breeze and had the audacity to look the winner at the 100-metre mark.”

Moroney has kept Hang Man around the 2000m distance range for Saturday’s race which has attracted 32 nominations and the gelding will be racing at The Valley for the first time in his career.

Among the entries for The Valley race include imports Django Freeman, Harbour Views, Dr Drill and Super Titus.

Dr Drill heads the weights with 62kg with Super Titus on 61kg.

Hang Man, whose most recent win was the Benalla Cup last September, has 57kg with acceptances to be taken on Wednesday.

“We’re tossing around whether this might be his last run this time in and then we’ll concentrate on the spring,” Moroney said.

Meanwhile, Moroney said last Saturday’s Flemington winner Chapada was likely to have a freshen up and be set for a spring campaign.