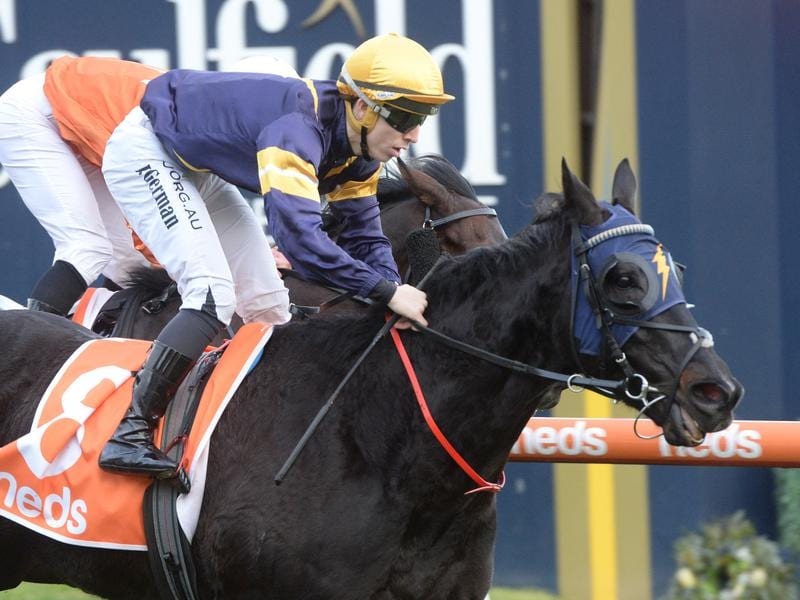 Mirimar has responded in the best possible way to a course of dressage and an intelligent ride to give trainer Mike Moroney a winning double at Caulfield.

Mirimar took out Saturday’s Neds Money Back Handicap under apprentice Lewis German after the victory of stablemate She’s A Thief.

While the Moroney stable was celebrating their success, trainer Matthew Williams was left deflated with the performance of $2.05 favourite Harbour Views who was beaten into fourth place under John Allen.

Williams was hoping success on Saturday would give Harbours Views a ratings boost ahead of the spring.

“John feels that a stronger tempo probably suits him to get into a better staying rhythm but I still think that he had his chance at the top of the straight,” Williams said.

“He was close enough to be more solid through the line. That is probably the disappointing part.

“We’ll definitely pull up stumps at the moment and give him a freshen up and try and pick our targets where we go with him next.”

Racing Victoria stewards reported Harbour Views pulled up lame in the left fore-leg and will need a veterinary clearance before racing again.

Starting a campaign in February, Mirimar raced through the autumn registering a 2400m victory at Caulfield then was given a break after finishing second behind Too Close The Sun in the Warrnambool Cup on May 6.

Dressage sessions were part of the program to refresh Mirimar.

Turnbull said the stable was pleased to see some sharpness back in the legs of Mirimar.

“They only crawled early so I was a little bit worried in the run but he made a mid-race move to put a bit of speed into the race which suits this horse,” Turnbull said.

“Once he gets going he can sustain a big gallop and that played into his hands and thankfully it all turned out well.

“The idea from Mike was to give him a freshen-up to try and get him to the doorsteps of spring.

“He’s consistent and once he races over 2000 (metres) and beyond he’s quite a talented animal.”