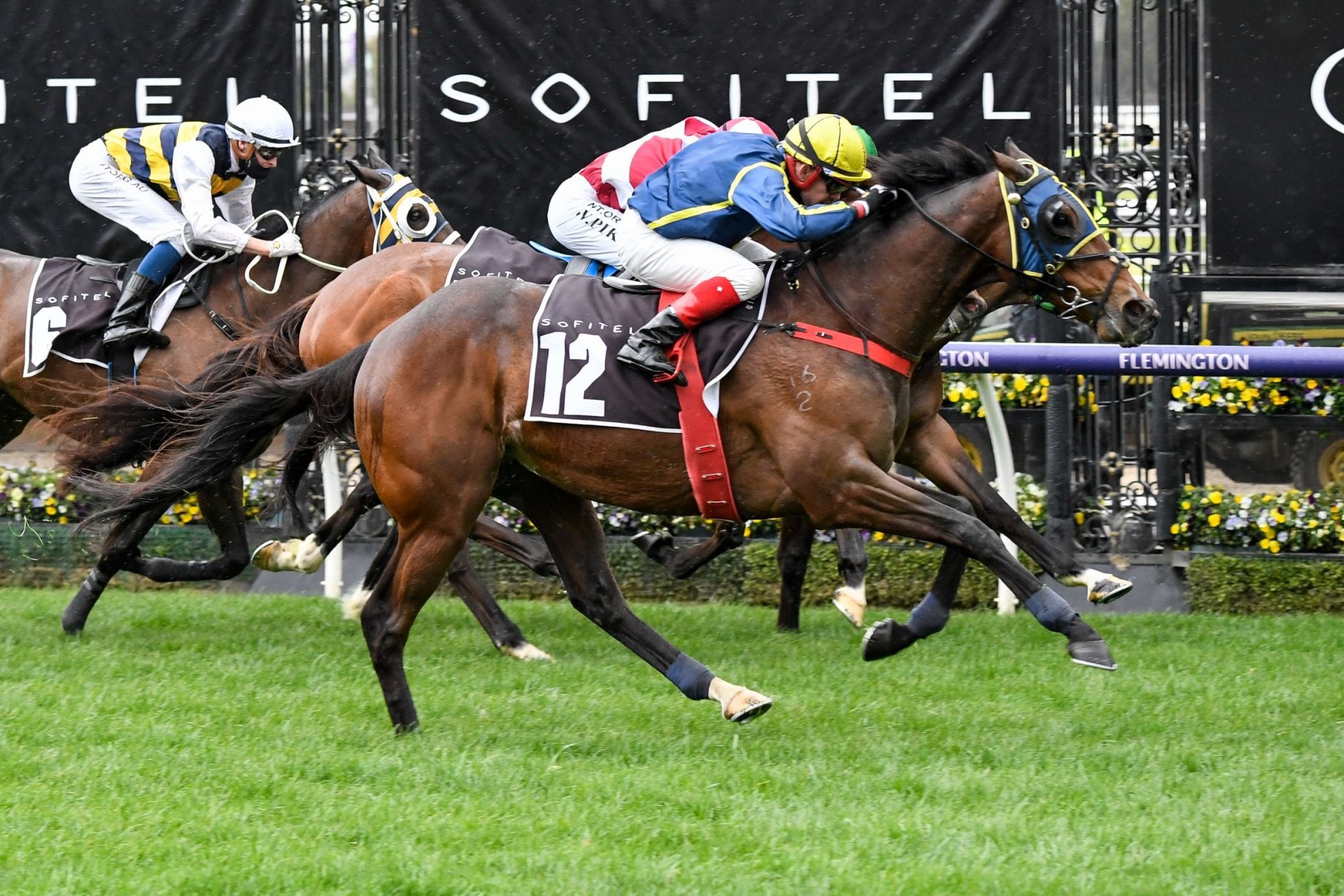 It might have been nearly dusk, but after Travimyfriend won the Listed The Sofitel (1400m) at Flemington on Saturday, Silver (John) Goodin was down to Pineau’s paddock with an extra scoop of feed and a carrot.

Goodin, who owns Pineau with his wife Helena and good mate Gavin O’Dea, loves his horses and was so chuffed with Travimyfriend’s win that he had to reward his dam who is currently on the Goodin’s 11 acre property just north of New Plymouth. “Even when she goes to stud, she must be fed twice a day to give her a boost and I don’t mind paying the extra cost,” Goodin said.

Eight-year-old Travimyfriend, from the second crop of Tavistock, was recording his seventh win. It was his third in Australia since relocating there with his trainer and part-owner Rachael Frost in 2018. Prior to that he had won four races in New Zealand and placed in the Group 1 Haunui Farm Classic (1600m), Group 2 Japan/New Zealand Trophy (1600m), Group 3 Anniversary (1600m) and Group 3 Taranaki Cup (1800m). He was also placed in the Group 3 Sandown Stakes, and second in 2019 edition of The Sofitel.

Travimyfriend is the third foal from Carnegie mare Pineau and is now her third stakes winner. Her first foal, Dancer’s Tale, who was bred by Helen-Gay and Graeme Bax and Go Bloodstock, won the Listed Welcome Stakes (1000m) at Riccarton, while her fifth foal Matchbreaker won the Group 3 Wellington Stakes (1600m).

“Gavin and I have been breeding horses for about 44 years,” Goodin said. “The first mare we bought together was a daughter of Light Fingers, called Nimble Fingers. She was in foal to Grosvenor and we got a colt that I took to the Trentham sales and sold to the great Tommy Smith. “We had another good mare too out of Analight and we bred a Marscay out of her and sold it at the opening day of the Karaka Sales Centre.

“In 2012 Gavin and I went up to the broodmare sale looking for another mare, we liked the bloodlines of this mare (Pineau) who was in-foal to Tavistock. “I am a good mate of Gary Hennessey’s who is neighbours with Graeme and Helen-Gay Bax who were selling Pineau. Gary introduced me and said I was an ex-dairy farmer with a small block who looks after his horses to the point of spoiling them. “Graeme Bax said that we would be ideal owners for the mare as she was always being pushed out of the way in a herd, and perhaps treated individually by herself would thrive.

“She was in foal with Travimyfriend, I did all the work, brought him up and looked after him. “He was a bit tough and quite strong but the hardest one out of the mare is the three-year-old Puke Park out of Ocean Park.”

The first foal that Goodin and O’Dea bred out of the mare was a filly by O’Reilly, who tragically died from leukaemia a week before the yearling sales. Her next foal was Matchbreaker, and he was followed by another Makfi named Not Santa who is raced by her breeders. She is in work with Fraser Auret and has had nine starts for three wins and four placings. They have also retained the Sacred Falls yearling filly from the mare.

“There is a lot more to come,” Goodin said. “Not Santa is a lot stronger mare now and is capable of winning a Group race, and Puke Park has already won a jump out. “We have an Iffraaj colt that was meant to go to the Sydney sales but didn’t due to COVID-19 and he is the best looking horse I have ever bred.

“My Dad was a breeder and so I have been around horses all my life, and our families go way back with the Chittys who have had that family for years.” Pineau is due to foal down to US Navy Flag and will return to Haunui Farm to Ribchester.

According to Goodin when it comes to mating Pineau he and O’Dea sit down and work out a mating. “Gavin and I talk amongst ourselves about the matings,” Goodin said. “We try and go to the best stallion we think will do the best for the mare, and when we come up with a plan, we might run it past a breeding specialist.”

For O’Dea, who retained a racing share in Travimyfriend, the win capped off a great couple of days. Cooga Moon, also bred by Goodin, and Makadoon were both placed at Hawera on Friday. “Travimyfriend went well didn’t he,” O’Dea said. “I’m really happy, it was a good field and capped off a good couple of days. “I’m proud of what he has done in Australia and I’m proud of the mare. She has now left three black type horses and we have three in work with Fraser Auret to look forward to.” – NZTBA