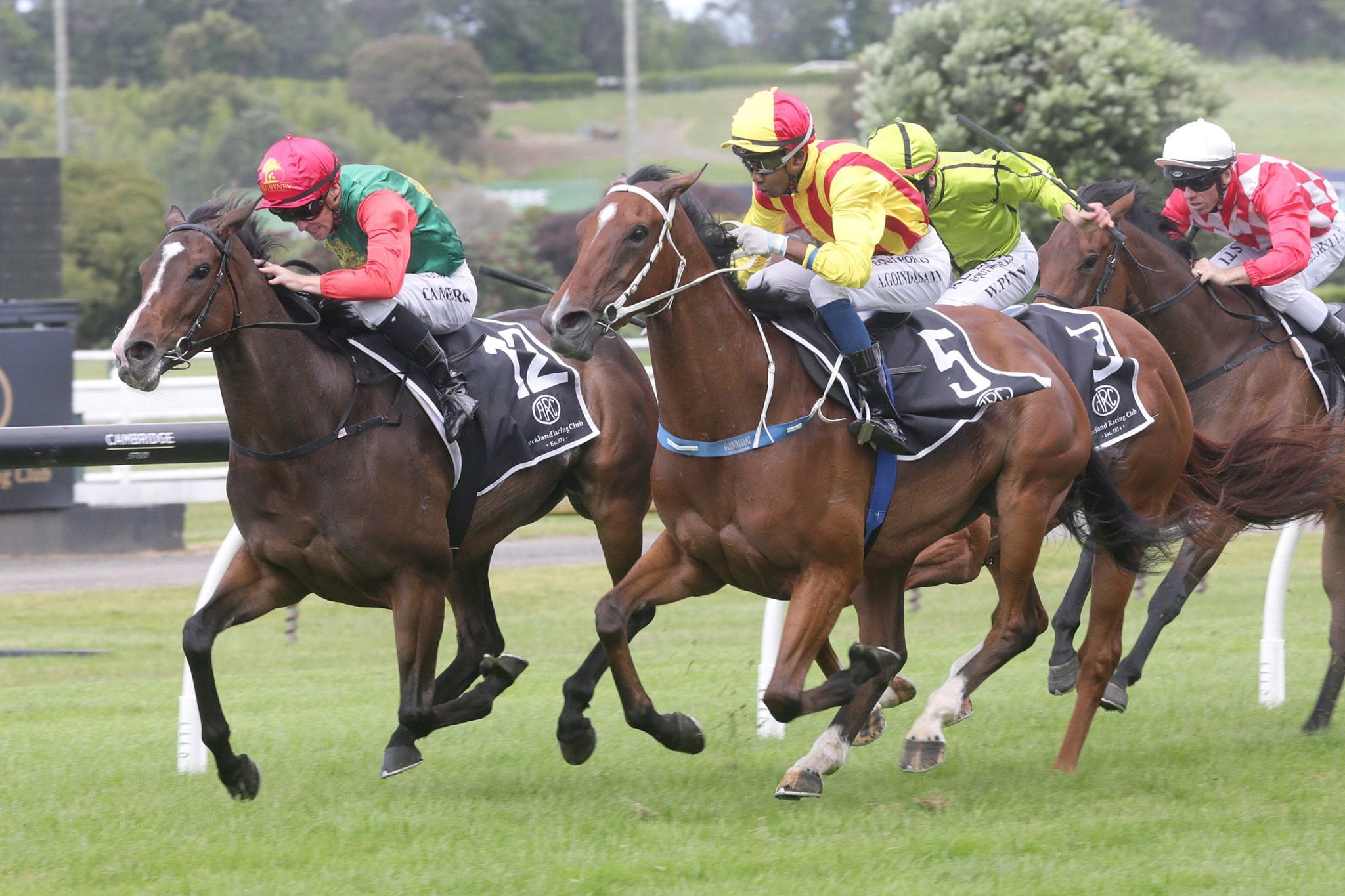 Ruakaka trainer Chris Gibbs turned his hand to being an arborist at his local track on Tuesday in order to ensure Ruakaka’s Wednesday meeting went ahead.

Gibbs, who is also a director of the Whangarei Racing Club, attended to a tree which fell on the driveway into the course on Tuesday, preventing visiting horses from getting to the stabling area.

“One of those big trees that had been there for a long time just decided to split in half, and you couldn’t get past it,” he said.

“We got a tractor in to remove it thankfully. You would never have been able to do anything with it otherwise – it was quite large, and my chainsaw’s as blunt as hell.”

After successfully moving the roadblock Gibbs was able to turn his attention to his six-strong team that he will line-up at his home meeting on Wednesday.

He will have a three-pronged attack in the United Security Northland (1600m), with Cate Blanco, Laurant, and Sympathique.

Cate Blanco was trained for most of her career by Allan Sharrock in New Plymouth before transferring to Gibbs earlier this year. She’s had one run for her new trainer, a fourth-place finish in a Rating 65 event at Pukekohe on March 24.

“She went OK for me at her first start, but she’s probably looking for more ground,” Gibbs said.

Laurant returns to Rating 65 company after running her last two races in Rating 74 events. She won three starts back at Ruakaka on January 7 and has been just behind the placegetters in her two subsequent starts.

“She’s dropping back in class, and though it’s her first race at a mile, everything she does suggests she’ll get the trip.”

Sympathique finished in a dead-heat for second behind Laurant on January 7 and has since run twice, finishing third at Pukekohe in a 2100m contest.

“She’s back from a very weak Rating 65 over 2100m so it’s very hard to get a line on her, but she is well and will probably go forward.”

Gibbs’s other runners at Ruakaka are Lord Polonius, who resumes in a Rating 65 event over 1200m; Diamond Girl, who will contest an open 1200m maiden; and Chevron, an unraced El Roca gelding.

Chevron is paid up for both the open 1200m maiden and a maiden restricted to three-year-olds and he is most likely to contest the latter.

“I’ve got a bit of time for Chevron, but he may want more cut in the ground and he’s drawn badly in both races,” Gibbs said. “I’ll probably line him up in the three-year-old race so that he and Diamond Girl don’t have to race each other,” he said.

“It’s not the A team for us by any means, but they are all well and they will have their chance.”

Meanwhile, promising filly Spine Tingle is set to be spelled until next season after a tough run in the Group 1 New Zealand Oaks (2400m) last month.

Spine Tingle, a winner of the Listed Oaks Prelude (1800m) at New Plymouth last season, came from well off the pace to finish fifth in the Oaks behind Amarelinha on March 20.

Chris Gibbs had hoped to take the filly across the Tasman for the Group 1 Australasian Oaks (2000m) and the Group 3 South Australia Fillies Classic (2500m), but said she would now return in spring.

“If she really bounced out of the race well she would have gone to South Australia, but I think she was a bit tired and didn’t bounce out of it well enough to go ahead with any of those plans,” Gibbs said.

“She does seem to go better left-handed and I think there’s a couple of nice races in that filly.”

Gibbs’s other pin-up runner this season has been Dragon Storm, winner of the Group 3 New Zealand Cup (3200m), but he is now set to move to an Australian stable, most likely Mike Moroney at Flemington, to chase staying prizes in that country