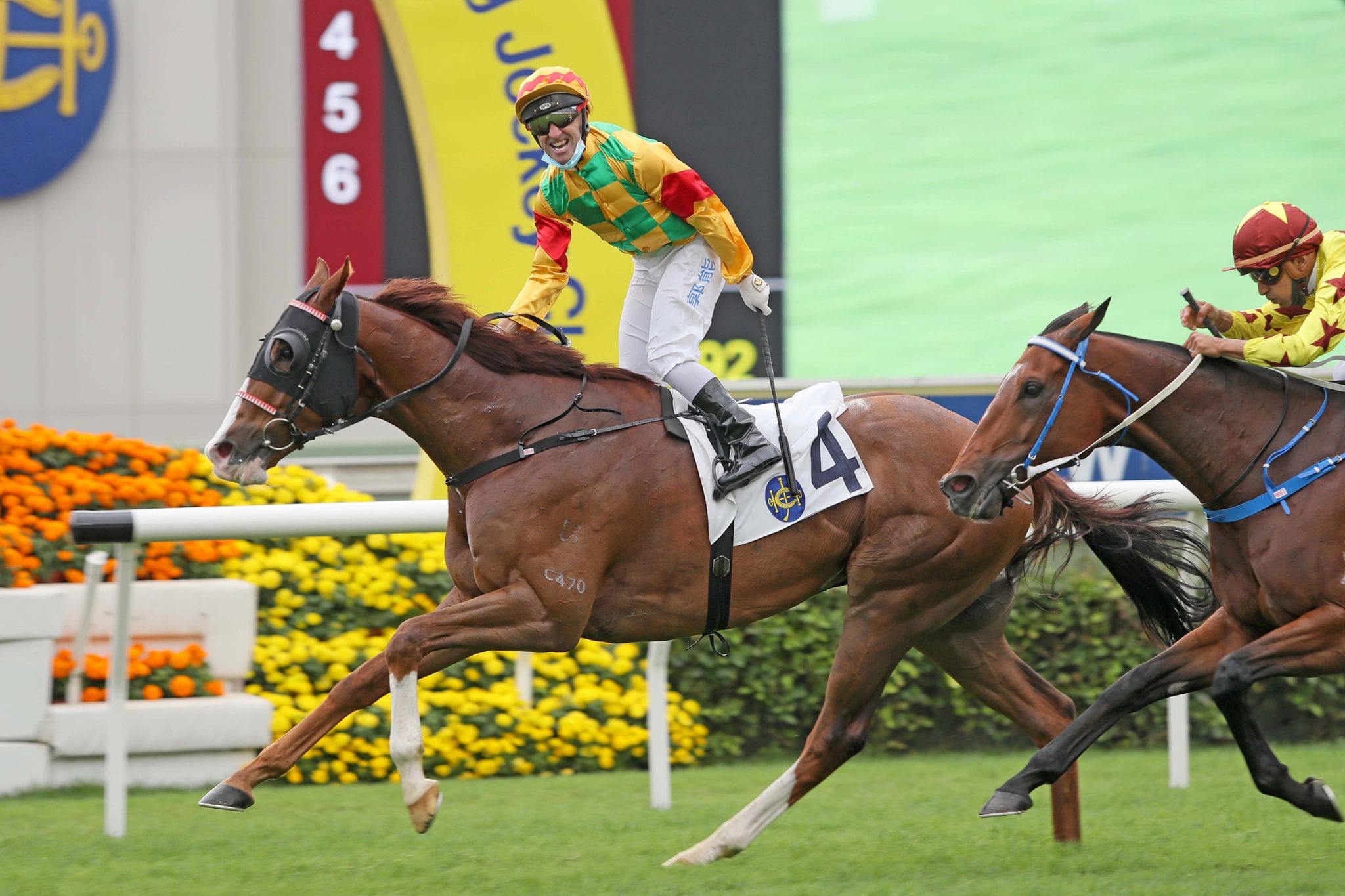 Sent around as an +1100 outsider against four opponents, the baldy faced chestnut defied market expectations to land the HK$4.5 million feature under a daring front-running ride from Callan, while Southern Legend (128lb) held second as More Than This (123lb) closed for third.

Callan, 42, savoured his third Chairman’s Trophy success Monday afternoon after the heroics of Beauty Only in 2016 and 2018 but on Wednesday, 7 April, he will have the status of his current license reviewed when he appears before the Licensing Committee in relation to his conduct during a Stewards’ inquiry in February.

“It means a lot, everybody knows my situation but all I want to do is keep working hard, keep riding winners here in Hong Kong and the bigger winners, the better,” Callan said after notching his 21st win for the season.

The Power gelding broke evenly from gate two, rolling to the front at the 1100m mark and from there the five-year-old was never headed on his way to a gritty half-length success under a fierce Callan drive, clocking 1m 35.06s with a 22.46s final 400m.

“At the corner, I just took a little tug on him and I knew he was going to give me a kick – the kick was his winning move, he just got two lengths on them and maintained it from the 200 metre mark,” Callan said.

“The bit of rain we had this morning could have only helped him but he jumped a little bit better today, he’s had a little bit of trouble jumping very fast,” Callan said.

The New Zealand-bred takes his record to seven wins from 15 starts but gets his first win at Pattern level after placing third to Waikuku in February’s Group 1 Queen’s Silver Jubilee Cup (1400m) last start.

“It was a small field, anything could happen and the horse (Ka Ying Star) who was expected to lead was scratched, so then we had a soft lead,” Yiu said.

The pairing with the 116-rater was Callan’s third after riding him in his past two outings.

“The key with this horse is he needs a jockey who knows him, who can keep his momentum and his rhythm because he has such a big stride,” the handler said.

“We’re entered for the FWD Champions Mile, but this horse, he’s just a lovely horse to train, he never runs a bad race,” he said.

“A bit of cut in the ground helps the horse, a little bit of moisture but we were always going to lead or sit close to the speed,” he added.

Trainer Caspar Fownes was pleased with Southern Legend’s effort to finish second as he continues building towards his FWD Champions Mile defence.

“He’s going really well and he ran very well just like I thought he would but he’s a bit unlucky really, I thought if we had led maybe we would have won but that’s racing,” Fownes said.

The Not A Single Doubt gelding has been a model of consistency this term with five consecutive top-three efforts from eight runs including three times at Group 1 level.

“He’s in good form and he’s in the right spot for the race coming up in three weeks’ time,” Fownes said.