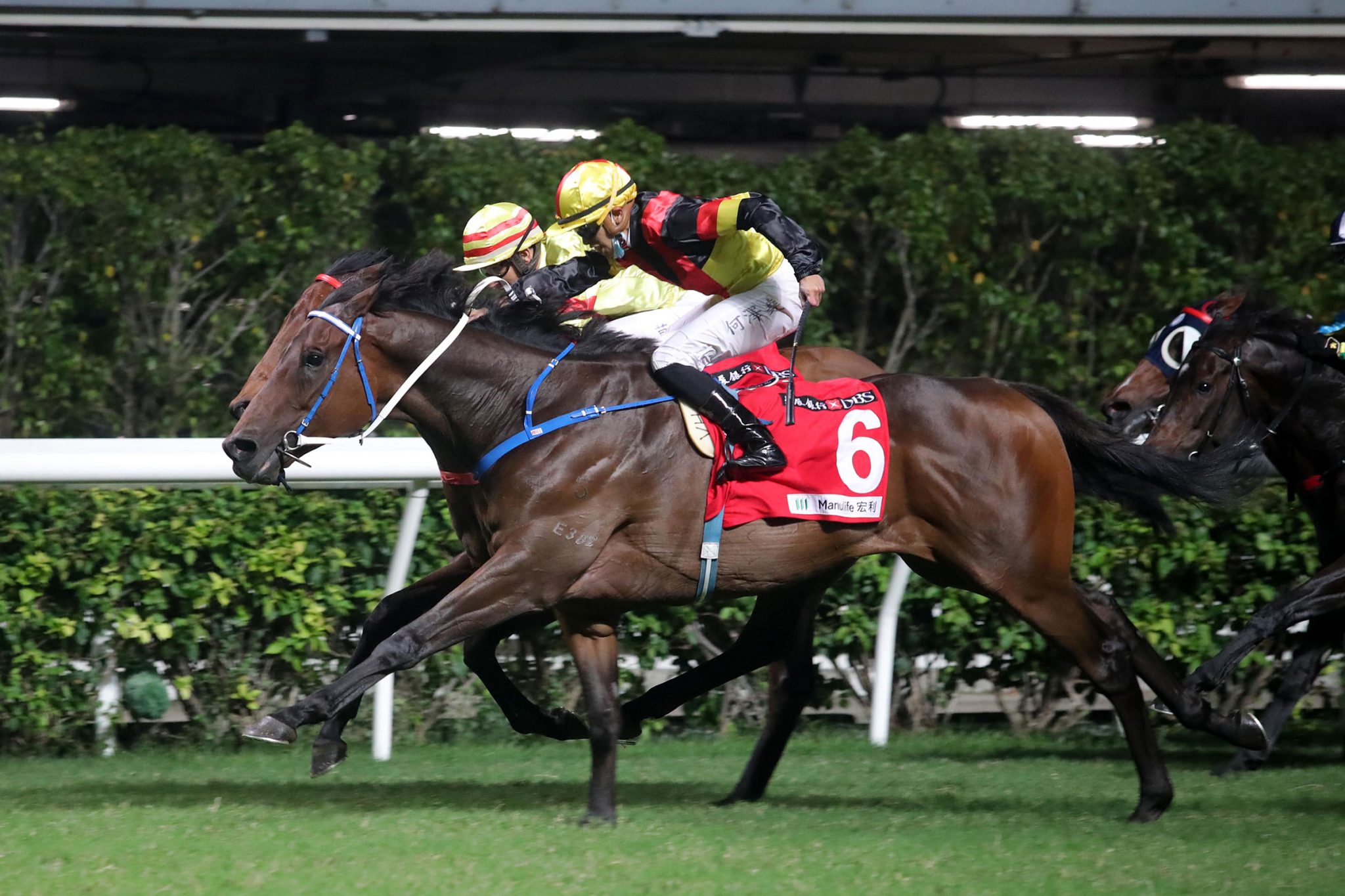 Champion trainer last season with 79 wins, Fownes celebrated his fifth win this term when the 2020 Group 1 Australian Derby (2400m) runner-up nailed Savaquin by a head in the HKD$2.4 million feature after covering significant ground for a portion of the race.

“He’s a nice horse and he showed a lot of fighting heart the last 75 (metres), it was getting a bit ugly at the 500 (metre mark), so Vincent (Ho) just decided to come back off him and try to let the horse balance up again coming into the straight before asking for another effort, luckily the horse was in good form and he gave him that – I’m very happy to get the win,” Fownes explained.

Clocking 1m 49.57s for the win, the Savabeel gelding defied seven, more experienced rivals who between them boast a combined 18 wins in Hong Kong.

“I’m very happy to win on his fourth start in Hong Kong, he keeps progressing each run and I look forward to taking him back to Sha Tin next start and hopefully he will keep improving,” Fownes said.

Unhappy with the slower-than-usual pace, Joao Moreira took off at the 850m mark aboard Savaquin – a move that quite nearly came to fruition, while trailing him, Zebrowski, was carted into a wide position.

“I wouldn’t say it was a good ride, I think that race was a pretty horribly run race but I’m glad my horse showed a lot of fighting heart to knuckle down and fight the last part and get the job done,” Fownes said.

Despite the wide run, Ho got the best out of the 84-rater in the final stages.

“He’s a good horse, it wasn’t a perfect ride, the pace was slow and I wanted to take off as well but Joao (Moreira) was faster obviously when he took off, I was caught out three-wide but lucky with the light weight, he has a great heart and he made it,” Ho said.

The win was Ho’s eighth from the last six race meetings, enhancing the in-form 31-year-old’s tally to 11 for the term.

“When you’re three-wide you just have to keep him balanced and not rush anything, you just wait until the straight and hope for the best and Joao’s horse, perhaps the weight got him and we had an advantage on that.

“He’s still very immature, mentally, so I think he still has plenty to learn and improve which is a good thing,” Ho said.

Tonight’s win ended a rare run of outs for Fownes stretching back to 22 September, during which he saddled an exasperating seven runner-ups.

“That’s racing, you get used to that, I’ve been in the game long enough so I’ll just eat a bit of humble pie and we’ll eat the apple pie when the time comes,” Fownes said.

Looking ahead, the handler is eyeing an end-of-season target with Zebrowski.

“I’ve said it for a while, I think he’s the type of horse I’d be looking at the Group 3 Queen Mother Memorial Cup Handicap (2400m) at the end of the season, he handles all types of surface and 2400 (metres) shouldn’t be an issue for him.

“He’s a horse that’s come here and seems to be adapting very nicely so we’re going to have some fun with him,” Fownes said.

Joao Moreira returned from a two-meeting suspension with a double this evening, firstly snatching section one of the Class 4 Plover Cove Handicap (1200m) aboard the Manfred Man-trained Inno Legend.

“He’s been working very well, I was actually expecting him to run a couple of weeks ago but unfortunately the meeting was cancelled due to the weather, however, that’s actually done him some good because he had a little bit of extra time to recover from the trial,” Moreira said.

The Brazilian capped his brace aboard Romantic Combo, who dug deep to score by a short head over Nothing New in the Class 4 Shek Lei Pui Handicap (1650m).

Moreira wasn’t alone in collecting a double, Karis Teetan sealed a brace of his own with victory in the finale, the Class 3 Tai Tam Handicap (1200m) aboard Wood On Fire.

Earlier, Teetan drove A Smile Like Yours to his second win this season in the second section of the Class 4 Plover Cove Handicap (1200m), defying the late charge of Showina down the outer.

“I’m excited to have two winners and it’s nice to have one for Peter (Ho) again aboard Wood On Fire, he’s been giving me a few rides this season – I’m glad I could get one for him,” Teetan said.

Antoine Hamelin fired Jimmy Ting into outright lead in the trainers’ championship with a tenacious victory atop Cigar Buddies in the Class 5 High Island Handicap (1200m).

“This horse (Cigar Buddies) likes to lead and he was relaxed in front because there was no pressure, which was good – he kicked nicely in the home straight and fought to the end, so I’m very happy,” Hamelin said.

“It’s unfortunate for Luke (Ferraris) because he did all of the work on the horse and he’s unfortunately suspended tonight, so I’m just the lucky recipient to pick up the ride,” Shinn said.

The South African-bred son of Duke Of Marmalade is now a two-time winner in Hong Kong following his first-up success in September over 1800m at Happy Valley under Luke Ferraris.

“David’s done a great job with this horse and he presented beautifully – his attitude and he just looked a picture of health in the yard, it’s nice for David to get another winner because he hasn’t got a big string in training but he does a lot of work and cares for his horses,” Shinn said.

Later on the fixture, Alexis Badel drove Cheerful Days to back-to-back wins with a superb display of timing and luck in the Class 3 Tai Lam Chung Handicap (1650m) for Francis Lui.

Settled at the tail of the field, Badel patiently made ground before spearing his mount to the inside when the gap presented, going on to score by a comfortable two and three quarter lengths.