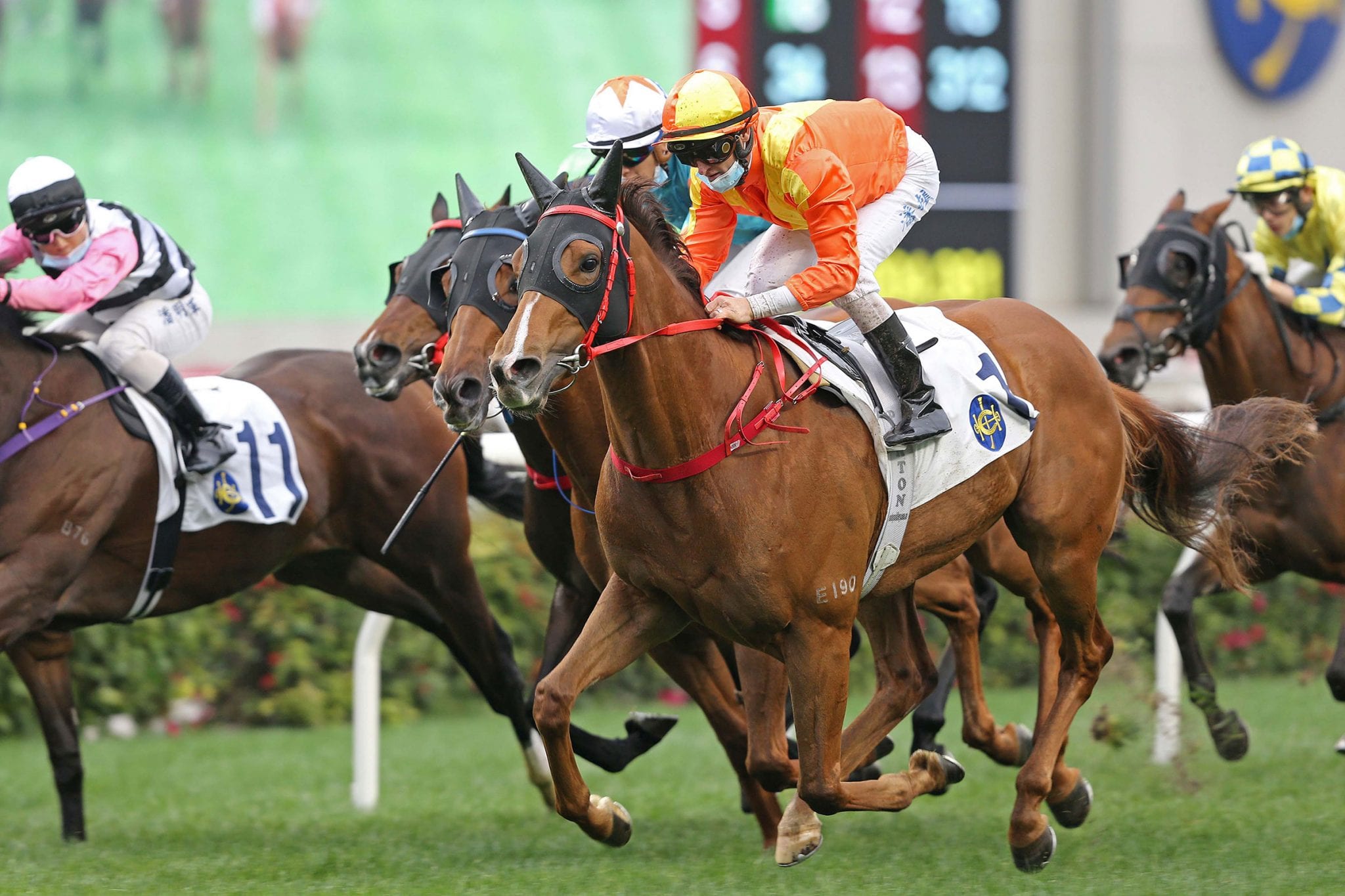 Flagship Glory has edged into BMW Hong Kong Derby (2000m) calculations with an impressive staying performance at Sha Tin yesterday afternoon (Sunday, 7 March) as Zac Purton continued a withering mid-season charge with a treble, leaving the Australian with eight wins from the past two meetings.

Sixth in last year’s Derby behind Golden Sixty, Butterfield was too strong for seven Derby-entered gallopers who needed to triumph to enhance Derby aspirations, downing Charity Go and Maximus.

The BMW Hong Kong Derby (2000m) field will be announced this week and Lor hopes Flagship Glory has done enough to significantly boost his handicap rating of 77. Maximus, with his third-placed effort, and Conqueror (fourth) remain in contention.

The first son of 2014 Epsom Derby winner Australia to triumph in Hong Kong, Flagship Glory has never been tried beyond 1600m.

But Lor is confident the chestnut can flourish over the 2000m of the Derby.

Flagship Glory competed as Establish in Great Britain for Roger Varian, winning at Bath and Newmarket – both over 1600m – before being transferred to Hong Kong.

Lor, who won the 2019 Derby with Furore, has taken an unorthodox path with Flagship Glory, dodging the Four-Year-Old Classic Series to concentrate on settling the import.

“When he first trialled he was a little bit keen and I wanted to take him step by step,” Lor said.

“It doesn’t matter if he can’t get into the Derby but if he gets in, we will run him.

Purton, who celebrated a treble to follow his five-timer at Happy Valley on Wednesday to cut the suspended Joao Moreira’s lead in the jockeys’ championship to 22, was impressed with Flagship Glory.

“It was a good effort because he stood flat-footed in the gates,” Purton said.

“He just decided to let them go and come out after them. I was able to get down nicely on the fence although, mid-race, they really slowed it up and I was a bit worried about where I was, but the leader went for home early and then split them up and allowed me to come out.”

“I believe he can run the distance, he’s very relaxed – he’ll give himself a chance,” the Australian said.

Apart from Danny Shum’s Butterfield and Flagship Glory, Purton also prevailed on So We Joy, prompting David Hayes to attribute the success in the Class 4 Marigold Handicap (1400m) to gear changes.

“Cheek piece off, Zac Purton on,” the dual champion trainer beamed after the son of So You Think charged through a gap late for Purton to post his second win in 15 starts.

Lor, who moved into joint third on the trainers’ championship with Francis Lui with 40 winners for the 2020/21 season, is upbeat over the future of Dragon Fortune, who overcame difficulties to land the Class 4 Jonquil Handicap (1200m) for Karis Teetan.

Still only a three-year-old, the Per Incanto gelding snatched the lead late from Decisive Twelve to seal a substantial betting move.

“Last time he drew (barrier) 13, this time he came out of seven, so it was better,” Lor said. “I thought he had a chance.

“I think he’ll still stay in Class 4 but we’ll keep going because I can’t wait too long with him.”

Ping Hai Bravo underlined his fondness for Sha Tin’s 1000m dash with victory in the Class 2 Cornflower Handicap – his fourth over the trip this season – and, in the process, became the 13th horse to claim a HK$1 million High Performance Bonus for winning a Class 2 as a four-year-old.

Five other horses have also claimed bonuses of between HK$500,000 and HK$1.5 million.

The success gave John Size his 50th winner for the season, boosting the Australian’s lead to three over Caspar Fownes (47).

Hamelin boosted his season tally to 20 by completing a double on Dennis Yip’s Flying Bonus in the Class 3 Freesia Handicap (1200m, AWT), holding off Lucky Fun and Man Star.

City Legend finally shed his maiden status, notching his first win at his 32nd attempt, by prevailing in the Class 5 Snapdragon Handicap (1400m). Trained by Benno Yung and ridden by Jerry Chau, the seven-year-old boosted his prizemoney earnings to almost HK$3 million.

The gelding debuted in Hong Kong four years ago and, in since then, has recorded 10 second placings and four thirds until his breakthrough on Sunday.

Lucky Ruby showed the benefit of a decent barrier trial on 19 February to reverse a form slump by snaring the Class 5 Oncidium Handicap (1200m, AWT) in dashing fashion for Manfred Man and Irishman Neil Callan.

While Juneau Park laboured into fourth, Chancheng Prince – the only son of Carpe Diem in Hong Kong – staved off Storm Warnings and Diamond Brilliant.