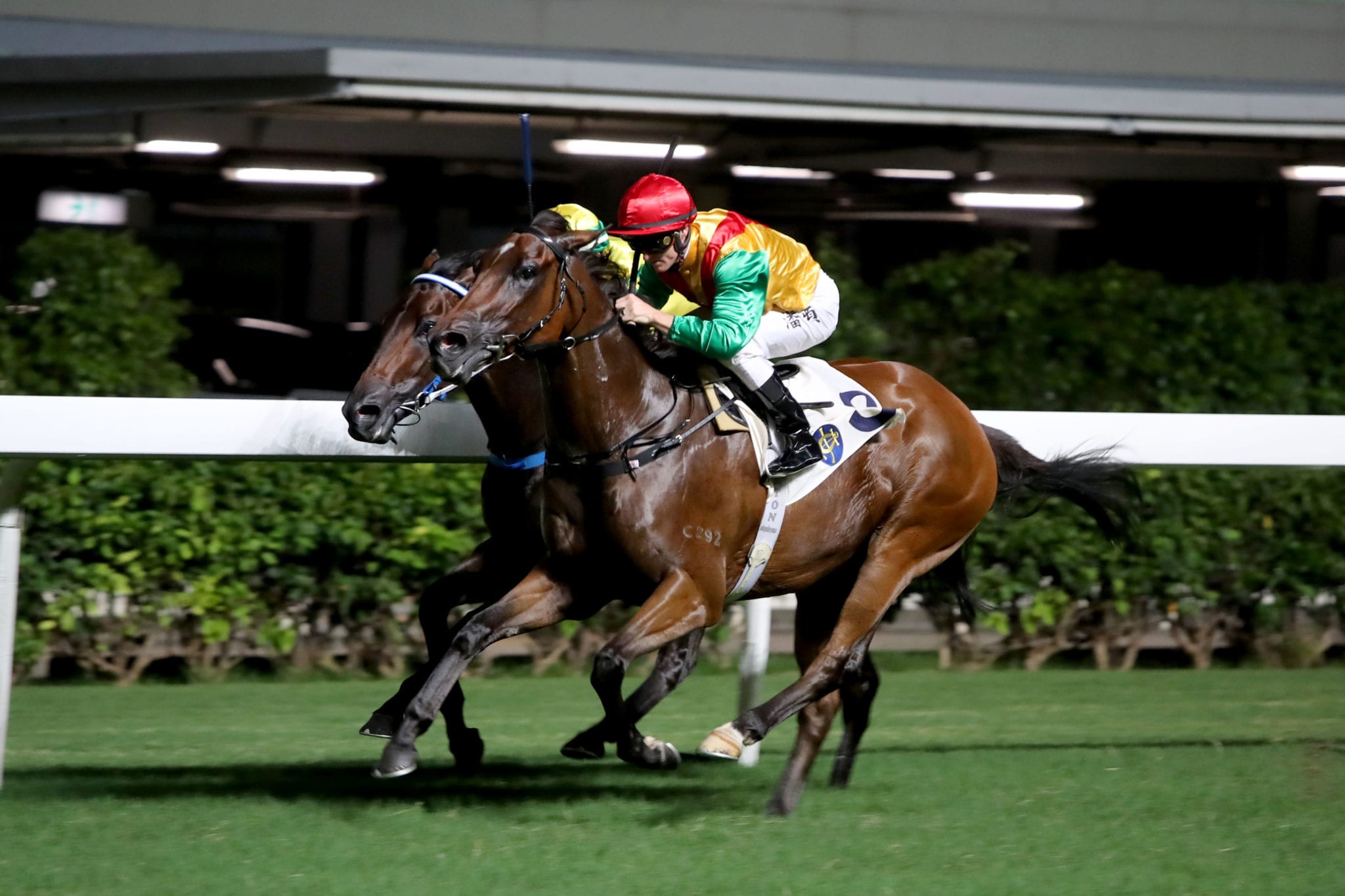 Zac Purton struck a four-timer at Happy Valley on Wednesday (24 June) that left his great rival Joao Moreira with a mountainous task in the title race and lifted Francis Lui right back into champion trainer reckoning.

Moreira narrowed the gap on Purton to three wins with an early success on the Caspar Fownes-trained Daily Beauty but the reigning champ hit back with a body-slamming quartet – all Lui-trained gallopers – that owed as much to a stroke of fortune as it did to sublime riding.

Purton began the night with a book of seven rides but when Vincent Ho was stood down with an ailment that total swelled to nine, with the champion’s two pick-ups making all the difference.

The Australian’s four-timer took him to 136 wins, seven clear of the Brazilian with six meetings left this season. Moreira will ride at no more than five of those with a suspension ruling him out of the third-to-last fixture on 8 July, but Purton is not counting his chickens.

“There’s a long way to go; a long way to go,” he said. “Joao is such a great rider that you can never write him off and it’s only a matter of time before he comes out and has a big day. You’ve always got to be wary of the wounded.”

Purton’s emphatic spree began against the odds in the Class 3 Mount Gough Handicap (1200m). Moreira was expected to land the spoils on Sky Darci, the night’s hottest favourite at 1.5, but when he pointed the Fownes racer for home, he found his rival rousting upsides on Highland Fortune.

Sky Darci dug for Moreira along the inside rail but Highland Fortune lifted for Purton who galvanised the Lui-trained four-year-old with a drive of powerful animation. “I didn’t expect the favourite to lead so it was a matter of adapting to circumstance,” Purton said.

“My horse, even though he was wide, he gave me the feel that he was still in it and I didn’t want to let the favourite kick on me and do a lot of work chasing; I thought I’d rather try to make a race of it and just see if we could tough it out and that was the case. “He found a bit at the end. It took a lot of hard riding to get past him but once I got past him he was good.”

That reestablished the Australian’s four-win lead over the Brazilian and he pressed on to five wins clear thanks to the first of his chance pick-ups, aboard the Lui-trained Star Shine in the next, the Class 2 Mount Cameron Handicap (1650m).

With Ho out of action, Lui was not going to leave the three-time champion sitting in the jockeys’ room. “It’s lucky that Zac was available!” Lui said, and Purton did not let him down, darting through a gap and driving his mount to a cosy half-length score. “The gap opened, I needed it,” Purton said. “But he still had to get the job done once it came and he let down really nicely. He was soft on the line.”

Purton and Lui repeated the trick in the next, the Class 3 Mount Nicholson Handicap (1650m), as Alpha Hedge put daylight on the field and coasted to a length and a half triumph over the chasing Shamport, representing the Moreira-Fownes combination.

“He had a beautiful run right from the time the gate opened, he bounded out of the gate,” Purton said. “He’s normally a little bit slow but he put himself in the right spot on the bit and felt comfortable and he did the rest, it was easy.”

Purton’s success on Victoriam in the concluding Class 2 Magazine Gap Handicap (1200m) ensured he and Lui rounded out the card with four wins on the trot; that moved the rider seven ahead of Moreira who was again a chasing runner-up on Winning Method. The winner travelled sweetly off the final turn but was clinging on at the wire to score by a short-head.

“He had to do it the hard way, three-wide no cover, and he had to battle on in the straight,” Purton said. “I’m very lucky to have picked up a couple of nice rides to help me. I just had some fit horses that were in form, for a good stable that’s been going well all season.”

Lui’s second career four-win haul – the other was way back in December 2004 – moved him back into contention for the trainers’ premiership. He ended the night in second place on 59 wins, two more than Tony Cruz and just two behind longtime leader Ricky Yiu.

“I’ll try my best but it won’t be easy,” Lui said of his chances of winning a first premiership. “The horses are all high in the ratings and it’s difficult to keep them fresh so late in the season – a lot will depend on how tired the horses are now.”

The fact that Lui is able to rank so highly is all the more notable for the fact that he is the only single-site trainer in the top eight, with his string – a maximum of 60 horses – all based at Sha Tin; his closest rivals are able to have up to 70 horses split between Sha Tin and Conghua.

Cruz maintained his championship hopes when Bullish Brother landed section two of the Violet Hill Handicap. That success came under Ho, who took his season’s tally to 60 before being stood down.

The Fownes stable saw Sky Darci thwarted but still bagged a double thanks to Daily Beauty in section one of the Class 4 Wong Nai Chung Gap Handicap (1650m) and Jazz Steed in the Class 4 Shouson Hill Handicap (1000m).

“I’m happy for Chad (Schofiield) to get a winner for us and for the owners, it’s been a while,” Fownes said of Jazz Steed. “We paid a bit of money for him from the Hong Kong International Sale but hopefully he’ll start to pick up and pay his price tag off a little bit. When he comes into next season he’ll be alright, he’s learning his trade and getting there.”

The handler was delighted with Daily Beauty’s breakthrough win having switched the gelding between 1200m and 1650m. “I’d been mixing his distances – in my mind I’ve always thought he was a miler but when I put him at a trip he ran disappointing, so I thought maybe I’d got him wrong, and then last start he ran really well over the six and I thought he handled the track well so we could come back here for a mile.”

Michael Chang has hit a vein of late-season form with seven wins since the start of May and odds of +4500 proved no bar to Chikorita, who took the opener, section one of the Class 4 Violet Hill Handicap (1200m), to give the handler a win at three meetings on the bounce. Blake Shinn could do with that kind of upturn, having notched only four victories since the turn of the year before tonight, but the Australian hoop showed his quality to overcome gate 11 and a tardy break, cutting down the Moreira-ridden Sell My Sole to land his 12th win this term.

Vagner Borges only arrived in town in mid-March but the Brazilian took his tally to 14 wins with a cheeky score on Smiling City in section two of the Wong Nai Chung Gap Handicap. The Douglas Whyte-trained galloper barrelled down the straight and rolled right on by runner-up Focus with Borges resting his arms through the final strides.