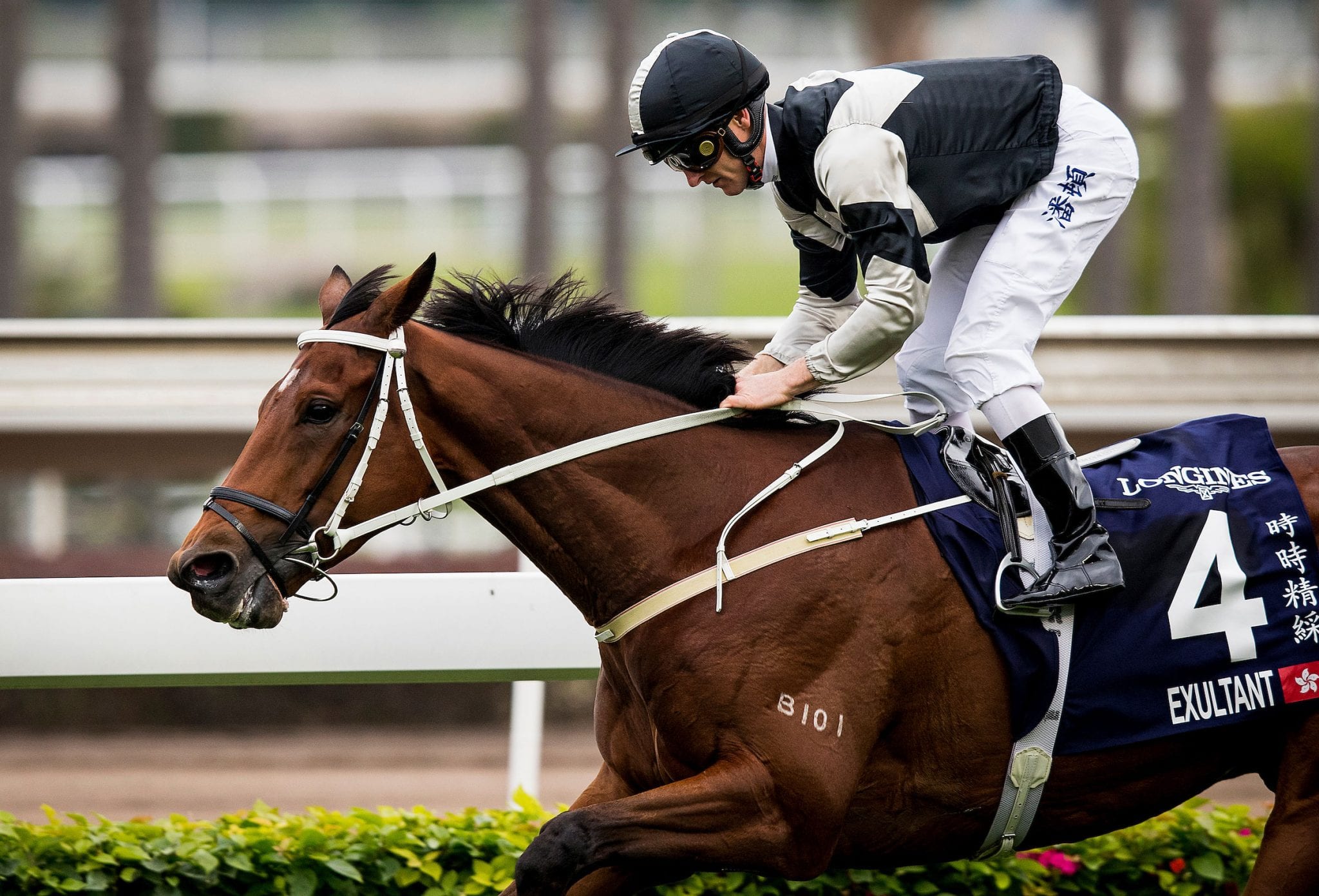 Exultant, one of the greatest champions in the history of Hong Kong racing, will farewell fans at a retirement ceremony this Saturday (26 June) in the Parade Ring at Sha Tin.

Enthroned as last season’s Horse of the Year, the Irish-bred gelding was twice crowned Champion Stayer and Champion Middle-Distance Horse, both times in successive seasons. Exultant ends his career with a record of 11 wins from 32 starts, never worse than fifth-place in any race with prize-money earnings of HK$83,491,900 – making him the second highest-ever earner in Hong Kong racing history.

Officially retired on 11 June, Exultant bows out of racing as one of the all-time greats of Hong Kong. Trained by Tony Cruz in each of his 11 wins (in Hong Kong) – the brilliant son of Teofilo steps away from racing having achieved five Group 1 triumphs, a sole Group 2 victory and four Group 3s.

“He’s one of the best horses I have ever trained, I’m sad to see him go, he brought us so much joy and happiness – he won the main races in Hong Kong and he was Horse of the Year,” Cruz said.

He never shirked a challenge, a superstar with incredible courage and resilience, Exultant’s determination and will was rewarded on the big stage time and time again.

His first win at the top-level saw him ward off an all-star cast to claim the 2018 Group 1 LONGINES Hong Kong Vase (2400m), producing one of the most exciting finishes in the race’s history when he and his most familiar ally, jockey Zac Purton, famously locked horns with Lys Gracieux.

“His win in the Hong Kong Vase illustrated the type of a horse that he was, that’s my favourite win, for sure, it’s very unusual, especially in a Group 1 to be headed like that and fight back,” Purton said.

Cruz agrees: “The Vase win was my favourite, the big highlight was when the Japanese horse headed him and he fought back, that’s what you want to see in a horse – he had such a good fighting heart.”

The early days, Ireland and the 2000 Guineas

Exultant was foaled on 24 March, 2014 at Ballygallon Stud in Co. Kilkenny, Ireland, nestled in the picturesque village of Inistioge. He was bay in colour out of the mare, Contrary, who had a limited career on the racetrack.

He made his debut as a three-year-old, known then as Irishcorrespondent for trainer Michael Halford; he scored by a comfortable three and a half lengths over the mile at Leopardstown.

Over a month later he returned for his second start and did the same again, this time by four and a half lengths ahead of Homesman, a subsequent two-time Group 1 winner who prevailed in the Australian Cup (2000m) at Flemington, earlier this year.

With two starts under his belt, the juvenile contested a fiercely competitive 2017 Group 1 Irish 2000 Guineas (1600m) on rain affected going at The Curragh. He finished a gallant third behind Coolmore’s Churchill and Godolphin’s Thunder Snow, the latter, a back-to-back winner of the Group 1 Dubai World Cup (dirt, 2000m) in 2018 and 2019.

Exultant’s pre-import career would encompass one more run, this time for fifth in the 2017 Group 3 Hampton Court Stakes (1993m) at Royal Ascot behind another of Godolphin’s global stars, Benbatl.

Arriving in Hong Kong for his four-year-old season, Exultant was sent to Tony Cruz – Hong Kong racing’s original megastar – a six-time champion jockey and two-time champion trainer with in excess of 2,200 winners, total.

Exultant finished a competitive fifth on debut in November, 2017 before he claimed his first win just two starts later under the hands of Zac Purton over 2000m at Class 2 level.

“He was a very difficult ride early on, he wanted to get his head up, pull and over race – he was doing a lot wrong but he was still competitive and able to win,” Purton said.

“Once Tony was able to get him to relax in the mornings he was then more relaxed in his races and that’s when we started to see him put all those very good efforts on the board,” Purton said.

Exultant flourished later on in his maiden season. He contested the 2018 Group 3 Queen Mother Memorial Cup Handicap (2400m) two starts after his Derby third, slamming a handy field by six lengths before his second to Pakistan Star in the 2018 Group 1 Standard Chartered Champions & Chater Cup (2400m), the following start.

He returned for one final run at the conclusion of his first campaign to snatch another Group 3, the Premier Plate Handicap (1800m), again under Purton.

Champion Stayer, the first time around

Exultant’s ability shone through in his second Hong Kong season when he captured three Group 1s, his courage and determination which saw him immersed into racing immortality was front and centre, as were fans in the Sha Tin grandstand, queued up to catch a glimpse.

Lining up as the second favourite for the 2018 Group 1 LONGINES Hong Kong Vase (2400m), Exultant was the home team’s leading hope to repel the Japanese and Europeans, and he didn’t disappoint.

“It was possibly the best Hong Kong Vase field that we have had here in Hong Kong, especially in recent times and he was able to win it for Hong Kong.

“It’s definitely the hardest race for our horses to win and he did it against possibly the best line-up – he’ll always have that on his resume,” Purton said.

Flushed out of the gates by champion jockey Zac Purton, the bay held a comfortable spot on the speed, tracking the pacesetter throughout before hitting the front at the 300m mark.

Purton continued to work on Exultant and he responded but a fast-closing Lys Gracieux and Joao Moreira were coming, narrowly overtaking the champ with 150m left to play.

Then in true Exultant style, Hong Kong’s heroic stayer rose to the challenge, denying her by a neck with his hallmark ‘never surrender’ attitude on full display.

“The older he got, especially later in his career he became more cunning, because he’d get to the front and then he would idle, and as they’d come to him he’d just find enough to win – at times it made me feel a little bit worried because the opposition was getting a little bit too close.

“But then I could feel he started to lift again underneath me as they were challenging him, he made me work for it but I always felt comfortable he could win those races because he’d done it so many times before,” Purton said.

The win would be the first of five Group 1s for Purton aboard Exultant, that season, the duo returned to snatch the 2019 Citi Hong Kong Gold Cup (2000m) as well the first of two Standard Chartered Champions & Chater Cups (2400m), only three months later. He also finished runner-up to Win Bright in the Group 1 FWD QEII Cup (2000m) between the conquests.

Horse of the Year, celebrity status

Reaching the mantle as Hong Kong’s second highest-ever earner in history is no mean feat and it was aided largely by his third campaign in Hong Kong, where he added four wins to his record including a pair of Group 1s.

“He was a quirky horse and he could do things wrong in races, he wanted to be a bit aggressive at times but he was obviously very talented and he had a good set of lungs,” Purton said.

“He was just a warrior.”

“It was incredible (the partnership with Exultant) and to also ride him over such a long period as well, it was great from the time he was a four-year-old up until his final run,” Purton said.

“He’d be one of the best horses I have ever had, especially over a distance, a horse like him you don’t see much from him in a barrier trial – you have to see him go around the winning post once before he can show you something and win,” Cruz said.

The final campaign, defeated but not diminished

Seven runs, six placings and no further than three lengths off the winner, Exultant’s final campaign once again illustrated his qualities as he remained incredibly competitive against a host of fresher adversaries, such as Golden Sixty.

While his mantle as top-dog in Hong Kong was waning, the bay raced on with plenty of vigour through his final campaign to place either second or third in three Group 1s and only once outside the top three in seven runs, total.

“When he was in the trials and in some of his races, he was starting to let horses past him and not fight, that was when I knew that the end was nearing.”

“He was still giving everything that he could but he just couldn’t give that extra little bit that he was able to the couple of seasons beforehand,” Purton said.

“The horse has obviously brought us a lot of memories, he’s obviously the most successful horse we’ve ever had. He’s given us more faith in horse racing in terms of how we can actually buy horses that can perform in Hong Kong because previously we hadn’t had much success,” Kirk Wong, the son of Eddie Wong, said.

“I was actually at Royal Ascot when he raced there and he obviously didn’t impress but Tony recommended this horse to us – funnily enough, I actually said no but smarter minds prevailed and we ended up buying him.

“My father is obviously the patriarch and he vetoed me and said ‘In Tony we trust’ and we got the horse.”

“Full credit to Zac and Tony because although we own the horse, we’re literally just spectators. The ability for Tony to maintain the horse in the condition he did for such a long period of time without injuries is very difficult obviously, so full credit to him,” Wong said.

Sitting second behind Beauty Generation in all-time earnings, Exultant is positioned HK$294,400 ahead of Viva Pataca (HK$83,197,500), another of Hong Kong’s all-time staying greats who was crowned Horse of the Year in the 2008/09 racing season.

“I think the owners should be commended for making the right call at the right time, whilst he was still being competitive in his races – he was still all heart, he was trying hard but obviously his better days were behind him and I thought it was the right time to make the decision to retire him,” Purton said.

Exultant steps away as an iconic figure of Hong Kong racing, leaving a big set of shoes to fill among the upper echelon of the city’s gallopers.

“Because our top races are set weights you can get one that really dominates for 12 to 18 months and you just have to get on at the right time and make the most of it and enjoy it while it lasts because it doesn’t last forever,” Purton said.

Known for his ice-cold temperament in the saddle, Purton is a four-time champion of Hong Kong with 1,289 wins to his name, second to only Douglas Whyte, Purton has partnered plenty of champions across his career including Beauty Generation.

“It was an outstanding couple of seasons and I’m missing them both at the moment, I wish another one would come along but they’re very hard to find those horses.

“I was very lucky to be able to ride both of them, even more so to have them both at the same time, it was a great period in my career and it’s sad to see them both go,” Purton said.