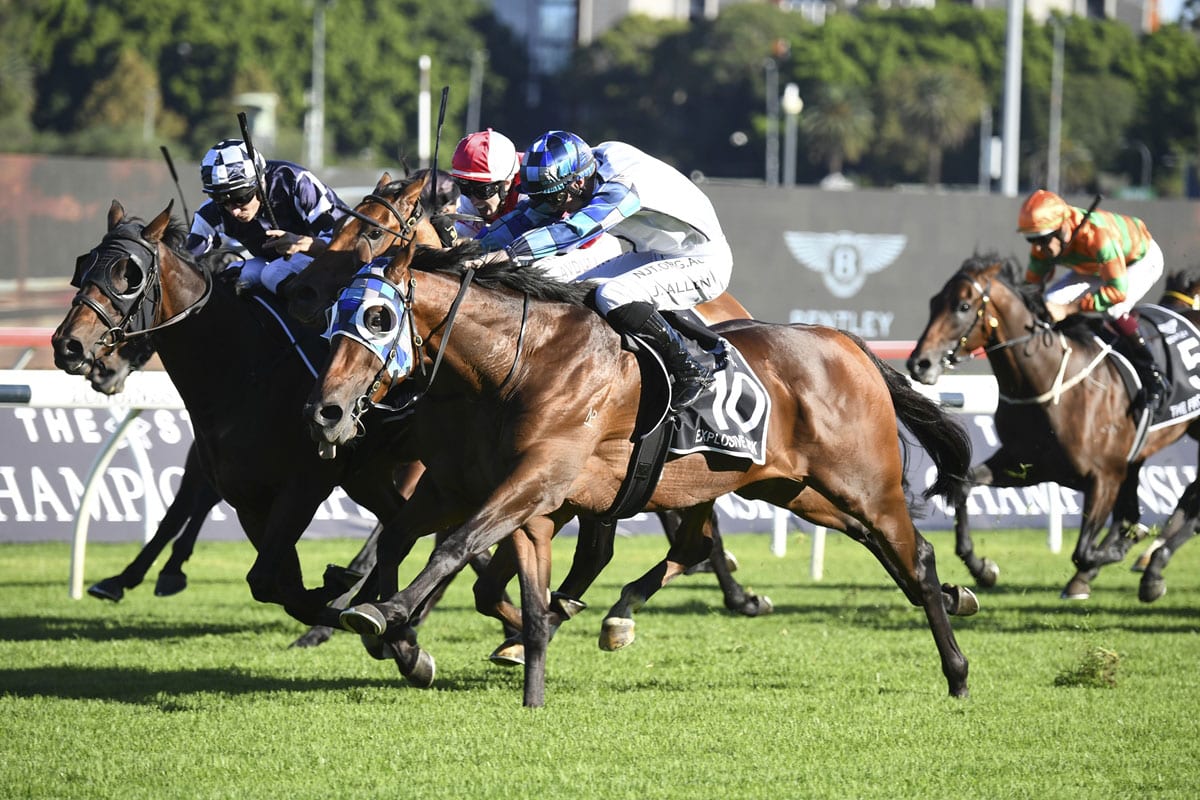 The success of New Zealand-bred horses in the Group 1 Australian Derby (2400m) continued last Saturday with Explosive Jack taking out the Sydney Classic.

The son of the ill-fated stallion Jakkalberry got up to win in the last stride of the 2400m feature, closing from the rear of the field to prevail from fellow New Zealand-bred runners Young Werther (Tavistock) and Lion’s Roar (Contributer).

Trained by Ciaron Maher and David Eustace, Explosive Jack followed a less traditional path into the Derby, traversing Australian states at will.

He won on debut over 1600m in late November, before running fifth over 2100m at his next start. A month later he stepped up over 2400m when he won at Kembla Grange against older horses before heading to Tasmania to take out the Listed Tasmanian Derby (2200m) in February.

Five weeks later he lined up in the Group 2 Alister Clark Stakes (2040m) at Moonee Valley where he finished third behind Grand Slam and Young Werther, and at the end of March he ran second to Liqueuro in the St Leger Trial at Bendigo. A fortnight later he was victorious in the Derby at his seventh start.

Explosive Jack was bred by Luigi Muollo, the owner of Novara Park where Jakkalberry commenced his stallion career, and is from a family that has already produced a Group 1 New Zealand Derby (2400m) winner in Vin De Dance and numerous other stakes performers.

“I bought Explosive as a yearling, and raced her and when she went to stud, she had six fillies in a row. I was cursing at the time but now I have all of them as broodmares. Every single one of those daughters have been winners and they have all produced winners or stakes performers.

“I have 10 of those mares and this year I had seven foals and six of them are by Staphanos and the seventh is by Sweynesse,” he said of the stallions that stand at Novara Park.

Explosive was by Exploding Prospect and won three races and was placed in the Listed Castletown Stakes (1200m) for Muollo before she went to stud. Extra Explosive, the dam of Explosive Jack, was her third foal and first stakes winner, before retiring to stud.

Explosive Jack is her fifth foal, her sixth foal is a colt by Time Test that sold for $65,000 at Karaka this year, she has a filly foal at foot by Staphanos and is in foal to that stallion again.

Explosive produced nine named foals, six to race and five winners including Explosive Dancer who won twice and was placed in the Listed Star Way Stakes, she in turn is the dam of Vin De Dance, the Joint Head of the New Zealand Three-Year-Old Free Handicap of the 2017-18 season who won the Group 1 New Zealand Derby and ran fourth in the Group 1 ATC Derby and Rosehill Guineas.

When questioned on the mating of Explosive Jack, Muollo commented that the mating was definitely stout, with Jakkalberry being a renowned stayer who won up to 2400m and was placed third in the Group 1 Melbourne Cup (3200m).

“Explosive Jack was the best stayer on the day, the family can leave a good stayer or sprinter,” he said.

“Jakkalberry didn’t reach his best potential here at stud, and the mating was a good balance of sire and dam. Ekraar is a very good broodmare sire, look at the result of the Sydney sale where Rising Romance left a million dollar yearling, and Shez Sinsational has left a stakes winner in Sinarahma, they were also both very good racemares.

“It is easy to breed to Explosive’s daughters if you don’t have any Danzig in the pedigree. Jakkalberry, Staphanos and Sweynesse are all free of Danzig.

“Everyone has their theories but really there are no rules. A good horse can come from anywhere. The best horse my Dad, who died last November, bred was Kingston Bay and he was by Kingdom Bay,” Muollo said.

It is easy to see that with 10 mares from this family and Explosive Jack possibly heading to the South Australian and Queensland Derbys on the way to the Group 1 Caulfield Cup (2400m), that Muollo is pretty excited about the future of this family particularly the six foals by his Deep Impact sire Staphanos.

“I can’t wait for those foals to hit the racetrack,” he said.

“Staphanos had a great race record, although he only won four races he ran in three Group One races in Japan and three in Hong Kong and was placed in them all. He’s very exciting and he is the highest stake earner at stud in New Zealand, earning $NZ6.2 million. His foals are very athletic types – strong, balanced and with good brains, the best is yet to come.

“I have 35 mares and I am constantly upgrading them, and my brother Tony, who bred Press Statement, Pressday and Hawkspur and raced Dundeel, is supporting me with 15 mares. We try and punch above our weight and look to do things better with our mares and foals.”

Muollo has enjoyed success with a number of other stakes performers recently and not all have been from the Explosive family.

This weekend Signora Nera, a Sweynesse filly he bred and races, will line up in the Group 1 Australian Oaks (2400m) at Randwick after finishing fifth in the Group 3 Adrian Knox Stakes (2000m) last Saturday. She was third in the Group 3 Eulogy Stakes (1600m) in December and is out of Madonna Mia who won nine races including the Listed Wanganui Cup (2040m).

Muollo also bred the Listed Wanganui Guineas (1340m) winner Only Words who is now with Chris Waller as well as Bonita Aurelia, the winner of the Group 3 Woburn Farm 2YO Classic (1200m) last season.