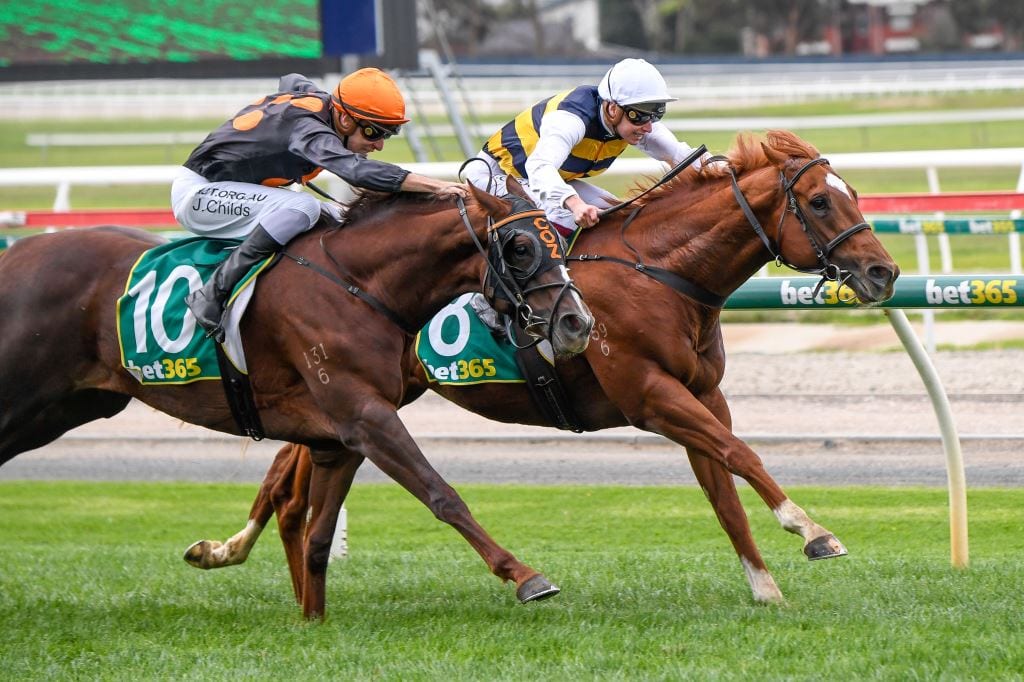 Ballarat trainer Matt Cumani is looking forward to the future with promising three-year-old Trench Warfare after his debut win over 1312m at Geelong on Sunday. “It was fantastic to get the win,” Cumani said. “It has been a long time coming, but we have always liked him and we had been looking forward to his debut. “They went quite quick upfront, a gap opened up nicely in the straight and Fred Kersley (jockey) gave him a wonderful ride and overcame his greenness by keeping him straight. “He did break slow from the gates, so he had to overcome that, so I think it was a win full of merit from a horse that will surely improve as we step up to 2000m.”

Trench Warfare caught Cumani’s eye when he was inspecting Rich Hill Stud’s draft at New Zealand Bloodstock’s National Yearling Sale in 2018 and he went to $220,000 to secure the son of Pentire. “We bought the horse in New Zealand, my father (Luca) and I, and Phill Cataldo,” Cumani said. “He was a beautiful horse at the sales and was the most fantastic walker. I thought he might grow up a little bit, lengthen out and become a bit more scopey looking and match his walk. “He hasn’t at all, but still has a fantastic walk. It looks like it has fed through to his gallop and he is quite athletic.”

Raced by OTI Racing in partnership with a number of stable clients, Cumani was rapt with the win and is setting his sights on spring racing with the promising galloper. “It’s really great for the whole ownership group and it’s lovely to see him run around in OTI’s colours,” Cumani said. “It’s great for Fred as well, who has just come out of his apprenticeship, and had his first win as a senior on him. “We will just keep it quite realistic now with him and make the most of the time of year that we are in and try and get a couple of three-year-old race wins under his belt.

“We’ll space his races out to give him a chance to not burn out this prep. That way, with a light let-up over some point during the winter, we can get him ready for the spring carnival if he is good enough. “He has got to go a long way from an average maiden at Geelong to spring racing, but he is the sort of horse that will hopefully get there.”

Meanwhile, Cumani said he was pleased to see former stable runner Etah James take out the Group 1 Sydney Cup (3200m) earlier this month, but admitted the win would have been sweeter had the New Zealand-bred mare remained in his care. “I’m gutted that she wasn’t with us because a Group 1 win for our stable is exactly what we need and what every stable needs,” he said.

“To have had her for so long and just miss out on that through unpreventable circumstances was just unlucky. “I was delighted to see her do it. She deserved it, she is a real trier. She was fantastic for us in our early days, she won the Lord Reims (Group 3, 2600m) and then the Pakenham Cup (Listed, 2500m). “She ran very well in New Zealand and it was a good idea of theirs to send her straight to Sydney just a couple of weeks before the race, and things worked out perfectly for her in the run. “They went solid on a deep track and it played into her hands perfectly. “She is a lovely mare and now it is great to see her have a great career as a broodmare hopefully.”

While training resumed in New Zealand on Tuesday with the Covid-19 Alert Level reducing to Level 3, Cumani said Australian trainers have been lucky that racing has been able to continue across the Tasman, but it has not been without its frustrations. “It’s a bit frustrating not knowing what is going to happen in the future and whether a horse might get stuck on one side of the (state) border or the other,” he said. “It applies a little bit to my two-year-old (Khoekhoe) that won the Showdown (A$855,000, 1200m) the other day.

“I have always wanted to take a two-year-old up to Brisbane for the JJ Atkins (Group 1, 1400m). I get a horse who looks like he might be the horse you would take to that race and yet logistically it is going to be far too difficult to get him up there I think. “There is the danger that if we get another spike in cases they might shut borders and be a bit firmer about it and we suddenly have a horse that should be getting ready for a Melbourne spring stuck up in Brisbane.”

While it has been a bit trying over the last few months, Cumani had nothing but praise for the Australian and Victorian State Governments for allowing racing to proceed. “It’s absolutely fantastic that we are still racing. It’s a real testament to what everyone has managed to achieve by putting in protocols and procedures that have kept it (Covid-19) out of racing,” he said. “It is great that this state and the government have let us continue and have faith in us to control it and keep social distancing measures in place.”