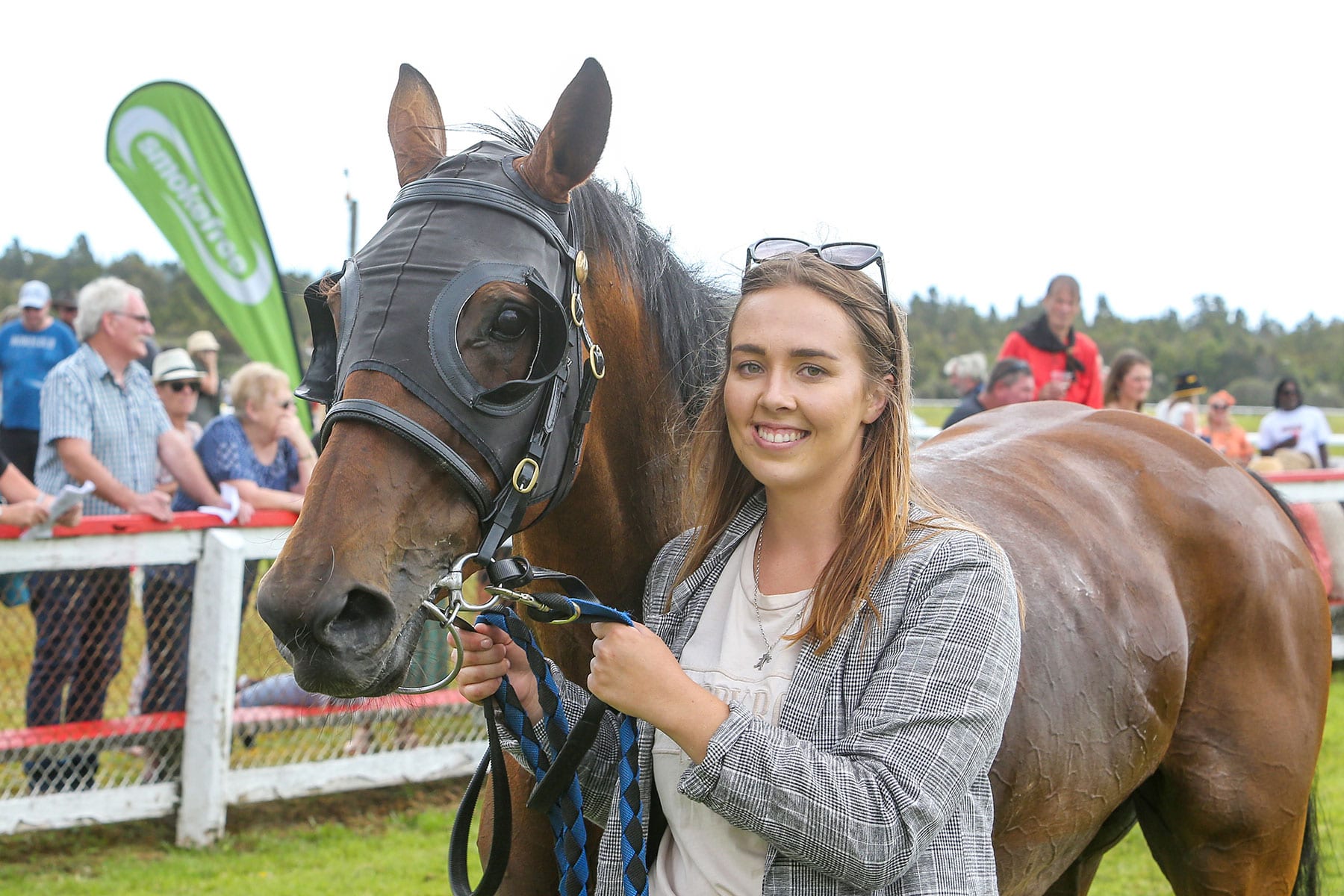 Cunneen (26), the daughter of Mid Canterbury rugby centurion Paul Cunneen, who bred the mare in partnership with Eric Parr and races her himself, boasts a strong equestrian background.

It was the second time in a week that Cunneen had travelled Mamma Sans to the West Coast, and with the addition of blinkers she beat a good field after jockey Brett Murray applied pressure at the 600m.

“They put on good days and get lots of people on course,” she said. “I had the clubs ring me a few days in advance asking if I wanted boxes, or yards, or tie-ups, and saying to bring owners to the Committee Room for a drink on us. It’s great hospitality, really.

“When Neil (Ridley) passed away I didn’t want to work for anyone else full-time, and thought it was a good opportunity to do my own thing. I’ve got access to more boxes and yards at Riccarton, and would like to build my numbers up eventually. “I’ve got a Burgundy colt being broken-in and will get him going to trial in the spring, and hopefully getting a couple of other ones.”

While more than capable hands-on with horses, Cunneen has also worked in racing stables owner communications. “Up until he died, I worked with Neil Ridley at Riccarton, but previously with Mike Moroney & Pam Gerard, Stephen Autridge and Jamie Richards, and Mapperley Stud, all in Matamata, and beforehand I worked here with Shane Kennedy & Anna Furlong.

Cunneen said the first win was still sinking in and regaled the story of a mare that was lucky to survive let alone race again and win. “I was in tears because I was happy for the horse, really,” she said.

“She’d had an accident at Motukarara and was in the vet clinic for weeks. We thought we may lose her at one stage because she couldn’t weight bear on her off foreleg for six weeks, but she ended up pinching a radial nerve in her shoulder. The vets thought they may have been missing a fracture. “When she came right, she was racing around the paddock and Dad said maybe we should give her another try.

“It was pretty exciting. Obviously, over the past few years I’ve had some exciting wins with Neil, but to have trained my own winner, it’s still to sink in. It was good to get the job done for Dad. He was there and I think he was more excited about it than I was. For me, it was a relief because I thought she’d run well at Greymouth.

“I want to build a small team and get them going, ideally, but I’m certainly open to discussing potential horses to train with their owners.”