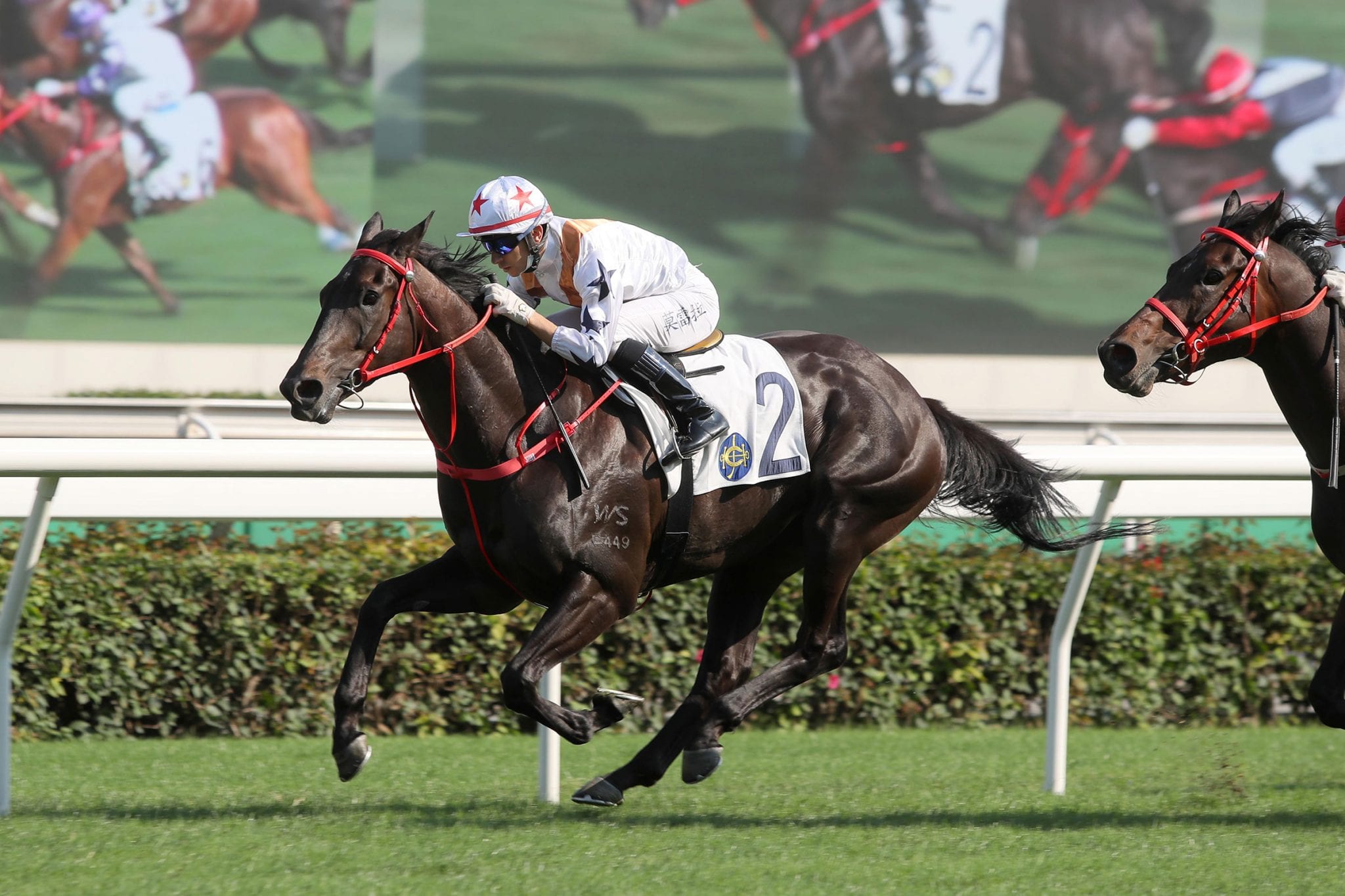 Joao Moreira declared Courier Wonder the most talented young horse he has ridden in Hong Kong this season, while David Hayes was similarly effusive about Fantastic Treasure after the exciting duo maintained unbeaten records at Sha Tin on Sunday (11 April).

Asked if Courier Wonder, a son of Sacred Falls and a full brother to Icebath, runner-up in the Group 1 Doncaster Mile at Randwick on Saturday (10 April), was the best youngster he had partnered in the 2020/21 term, Moreira was unambiguous.

“For sure, this season, yes. It’s been a while since I’ve been on top of a nice horse like him. If he keeps on tracking and keeps on learning as he should, he’s going to go far – I can tell you that,” the Brazilian said after winning the Class 3 D’Aguilar Peak Handicap (1200m) on the PPG (Privately Purchased Griffin).

“It was a bit more difficult because of the weight (133lb) on his back and he had the wide gate (eight), so he had to use himself to come across and he did win with something left in hand.

“I did not use the whip on him. I showed him the whip and they were closing up but I think that’s because of the weight.

“He’s a young horse, only a three-year-old. He’s got plenty to learn and I think there’s plenty more to come from him.

“This time he won by a shorter margin and that was just because of the weight. It was still quite convincing to me and I still have a lot of faith in him that he’s going to go very high.”

Twice handed 14-point ratings rises after his first two wins, Courier Wonder – who was prepared for a Cranbourne trial win in Australia by Robert Hickmott in March 2020 – will now rise to Class 2 company for John Size.

Size also unveiled yet another talent in Dragon Baby, an unraced Sizzling gelding, in the Class 4 Pottinger Peak Handicap (1000m) to lead the trainers’ championship – 56-54 – over Caspar Fownes.

Handled patiently by Chad Schofield, the three-year-old sat back in the field before charging late to justify substantial market support.

“He was impressive, I had never sat on the horse before but I got a bit of confidence from Mr Size before the race,” Schofield said.

“He didn’t muster a great deal of early speed but we were able to recover and as the race went on, the more comfortable he got and he was very strong late.”

Schofield, celebrating an excellent afternoon, notched a double aboard the David Hayes’-trained Fantastic Treasure, and was equally taken with the import after victory in the Class 3 Ma Kong Shan Handicap (1400m).

“He’s still learning but he was very impressive,” Schofield said.

“The horse just went to sleep on the rails, like good horses do. I felt like I was always going to win but I had to do a bit of manoeuvring, when I got him into the clear and pressed the button that acceleration was there.

“He’s very exciting. It’s always nice getting on these nice young horses and I’m grateful to ride them.”

Hayes praised Schofield’s behind-the-scenes work with Fantastic Treasure, another PPG and a son of Written Tycoon.

“I think Chad did a very good job, he was patient and he was educating the horse going through,” Hayes said.

“If I was training that horse in Australia and he had three wins like that in a row, I’d be setting him for the (Australian) Guineas. It was the run of a good young three-year-old that you’d head to the Guineas and certainly the lead-up races with. He’s a wonderful horse going forward.

“He’s good in a field, he’s brave and he’s strong at the finish. The best work is always his last 200 metres. He’s got lots of tricks and more improvement to come.

“He probably won’t have much more racing this season, maybe one or two more races at the most and then we’ll put him away, because he’s only a three-year-old.

“This season is about getting him ready for next season. We’ll train him for the Four-Year-Old Classic Series, they are the logical races. But you know that you’ve got to have a rating of about 85-90 to get in them and he’ll be getting pretty close if he can win again.”

Bought for US$105,000, Turbo Power follows in the footsteps with fellow American-bred Griffin winner Chancheng Prince.

Zac Purton figured on Carry The Diamond in the Class 5 Tai Tam Gap Handicap (1000m) for Richard Gibson before scoring atop My Ecstatic in the first section of the Class 4 Stanley Gap Handicap (1400m) for Lor.

Alexis Badel and Manfred Man combined with Gluck Racer to land the Class 4 Siu Ma Shan Handicap (1200m) before the Frenchman struck again – and also ensured a brace for Lor – with Everyone’s Delight in the second section of the Class 4 Stanley Gap Handicap (1400m).

Lor registered his treble, taking his seasonal tally to 49 to remain within touching distance of Size (56) and Fownes (54), when Moreira piloted Looking Great to victory in the Class 3 Mount Butler Handicap (1800m).