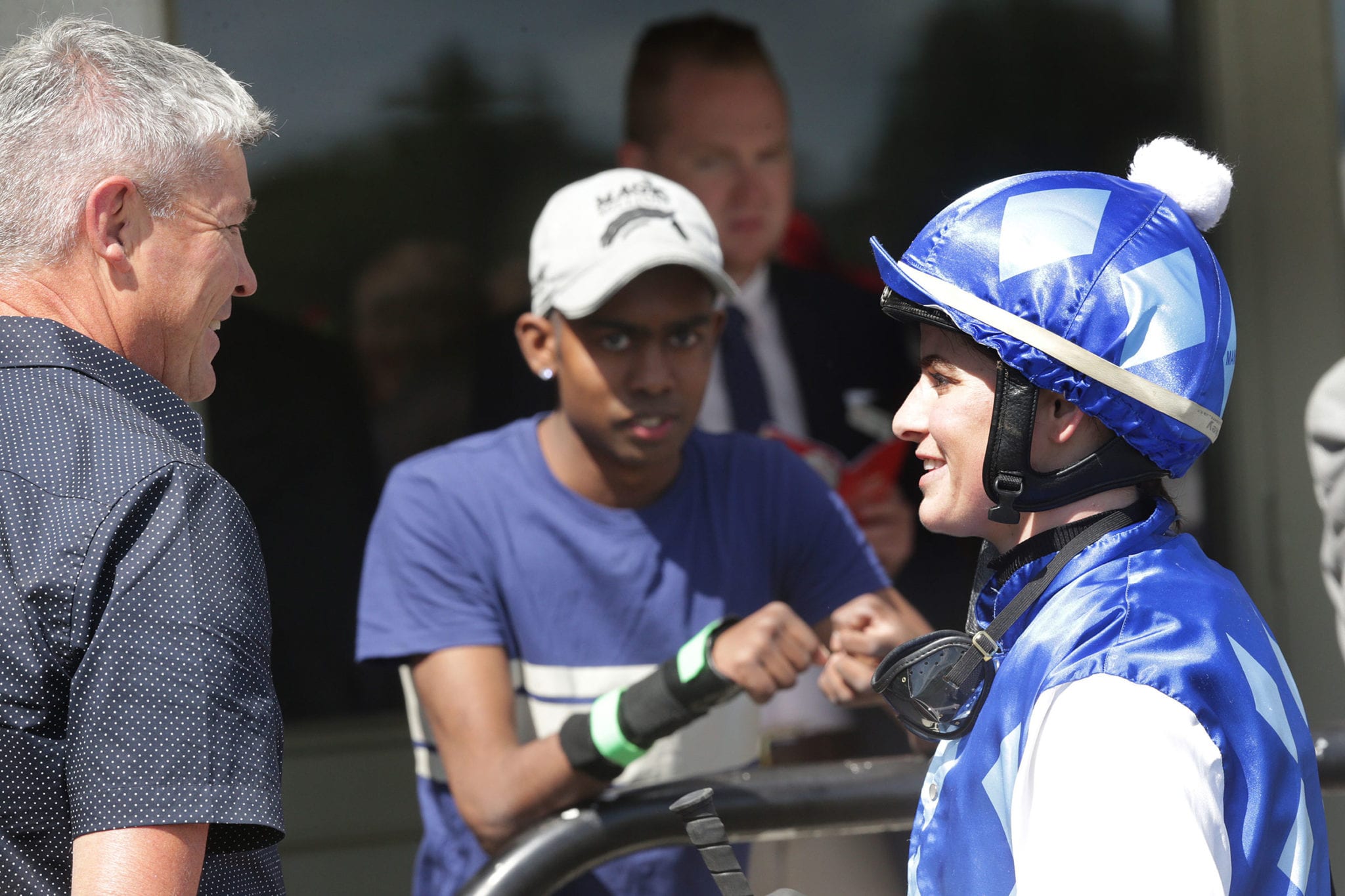 Alysha Collett will return to Singapore for a 12-month stint after a brief return home to New Zealand for a Christmas holiday, where she has mixed time with her family in Pukekohe with riding at a handful of race-meetings.

Collett reminded New Zealand racing fans of her talent when successful at Te Rapa on Saturday aboard the Ralph Manning-trained Cutting Up Rough and she has seven rides at Ellerslie on Boxing Day, including last-start Rating 82 winner Orakei Overlord for Byerley Park trainers Shaun and Emma Clotworthy in the Group 1 Cambridge Stud Zabeel Classic (2000m).

Collett made a special trip to Kariotahi Beach, Waiuku, to ride Orakei Overlord in work on Monday morning and also rode another of her Boxing Day mounts, the two-year-old debutant On Display, for Danny Walker at Byerley Park. “Orakei Overlord is a big, staying type and he felt good,” Collett said. “I don’t know much about him, apart from him winning well last start, but he worked nicely.”

Orakei Overlord began his career in New Zealand with trainer Patsy Riley and was placed in two of his three starts before heading to Melbourne, where he won four provincial races for Ballarat trainer Patrick Payne. He joined the Clotworthy team in August and won a Rating 82 1400m second-up at Ruakaka and contested three open handicaps before successfully stepping up to 2200m for the first time last start.

On Display, a Showcasing gelding, has shown promise in two trials leading in to Thursday’s Stella Artois 1100. After a third in his first trial, over 800m at Te Aroha earlier this month, he won decisively over 800m on the same track 13 days later. “He looks my best ride, but he’s got a real bad barrier draw (12). It’s hard from out there, especially for two-year-olds,” Collett said. “He worked well and is a little professional. It’s just a pity he has drawn so wide.”

Collett will also ride Giant Gem, a last-start winner for Cambridge trainer Bernard Dyke and a chance in the Dunstan Feeds 1500m Championship Final. Her other mounts are Two Thirty for the Clotworthys, Breezon for Stephen McKee, and Ruakaka stablemates Final Suggestion and Mumms Jewel, a lightweight prospect in the Listed Hallmark Stud Handicap (1200m) and a winner of her last two starts and four of her 14 outings.

Mumms Jewel and Final Suggestion are prepared by Chris Gibbs and Michelle Bradley who operate from the Ruakaka stables established by Donna Logan, now a successful Singapore trainer and a strong supporter of Collett. “It has been going well for me in Singapore,” Collett said. “I’ve been getting plenty of rides and Donna has been really supportive and so has James Peters (trainer). “Just after I started back in Singapore this last time my Mum (Judy) came over for a holiday and watched me ride. I won a double that night, including my first winner over there for Donna.”

Collet rode 11 winners during her latest Singapore stint and among her 27 placings were feature placings for Peters. She ran second on Grand Koonta in the Singapore Group 2 Barker Trophy (1400m) last month and third on Destroyer Eclipse, by Alamosa, in the Singapore Group 3 Colonial Chief Stakes (1600m) on December 8. Collett won two races in succession on Grand Koonta before the feature placing and is looking forward to being reunited with the son of Dark Angel. “He was beaten just a nose in the Group 2 and it was a strong field of sprinters and worth S$400,000,” Collett said. “He’s up to winning a (Singapore) Group 1 and he’s one I’m really looking forward to riding again and there are a couple of others, too.”

Collett arrived in New Zealand a couple of days after her placing on Destroyer Eclipse and picked up five rides at Ellerslie on December 12. “I’ve spent most of my time catching up with family and friends and I had a week and a half in Australia,” Collett said. “It’s been great and it’s been good to ride a winner while I’ve been back. Hopefully I can get another one on Boxing Day. “I leave again on the 29th (December) to be in Singapore for the start of their new season.”

Collett ended her first stint in Singapore on the injured list as a result of a fall at Kranji in October last year. She suffered serious damage to her L1 lumbar vertebra and a fractured right heel and underwent surgery in Singapore to have metal rods and screws inserted to stabilise her lumbar region. It was a long, slow road to recovery and she resumed race riding in New Zealand in July before departing for Singapore and said she has no after-effects from the injuries. “It took a while to adjust to the pressure over there with the workload, but there have been no problems,” she said. “It’s good to get a 12-month contract this time.”