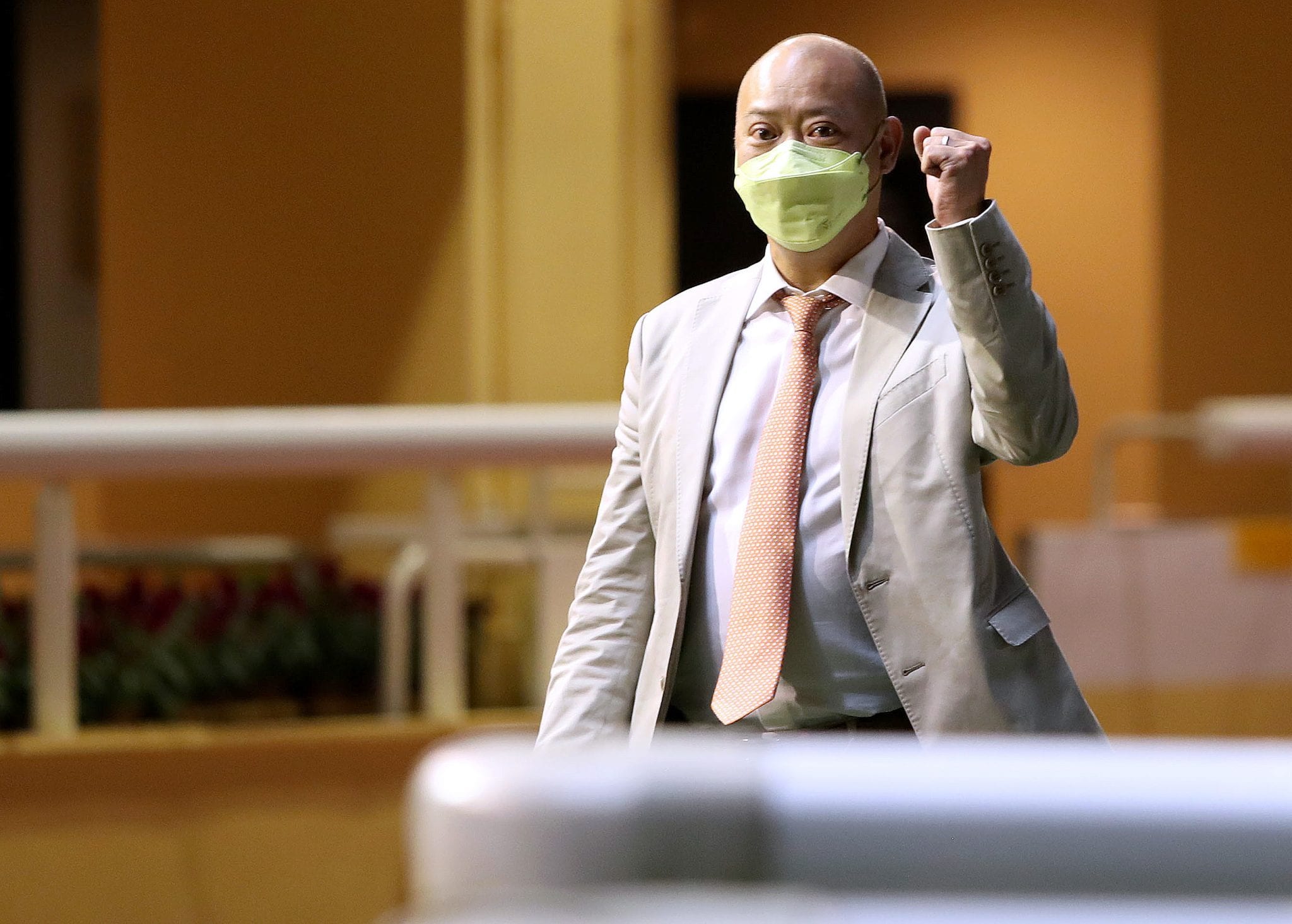 Classic Unicorn sealed a Chris So double with a smart win in last night’s (Wednesday, 7 October) feature, the Class 2 High Island Handicap (1000m), justifying his handler’s belief that this could be the promising chestnut’s ‘coming-of-age’ campaign.

After an unbeaten debut season, the five-year-old mixed his form last term but saw off a strong field of sprinters at Happy Valley to take his eye-catching record to four wins from eight starts.

“He’s five years old now, he’s calmer, he’s mature, and he has more confidence,” So said. “This year he has put on weight, because the last two years he was quite skinny but after the summertime, he’s come back different.”

Derek Leung fired the gelding out of gate 10 to skip along close to the speed in a wide alley and had to work for the lead before pouring on the pressure at the 550m mark. The speedster kicked on in the straight to score by one and three-quarter lengths ahead of the fast-finishing Gunnison and third-placed Multimillion, while the race-favourite, Highland Fortune, could only manage fourth.

“He’s more relaxed, he still has the early speed but it’s not crazy and that’s why he can finish off – he’s older now, mentally stronger and everything about him, he’s just grown up,” Leung said.

“Because he has so much early speed, if someone challenged him, he would fight back and not give up, that’s why he used to use too much energy early. We went fast but he felt as if he had something left, I had confidence in him.”

Classic Unicorn arrived in Hong Kong from New Zealand as an unraced PPG (Private Purchase Griffin) and since then has risen 31 points in the ratings.

“I think both tracks are fine, it depends on his rating now, because Happy Valley has the bend, we think it does suit him more, but we’ll discuss it with the owner,” So said.

Vagner Borges kicked off the trainer’s double with victory aboard Faithful Trinity in section two of the Class 4 Shek Pik Handicap (1650m).

Stock Legend got off the mark in Hong Kong from an improbable position after missing the break by close to seven lengths in section one of the Class 4 Shek Lei Pui Handicap (1200m), recovering to fire home a double for Vincent Ho.

The Francis Lui-trained galloper stalled at the start and veered left but managed to tack on to the field after 200 metres, and, aided by a fast-pace and a calm Ho, he swooped to conquer.

“Unbelievable, I was like what happened?” Ho said. “It was lucky the pace was on, I just kept pushing him and he got a good spot following Alexis (Badel) and we got a gap and by the 400-metre mark I knew he should have a chance because he felt good in his trackwork.”

“He has a great turn-of-foot and they were bunched up a little bit so it wasn’t as if I had to make up too many lengths, but it was still tough,” Ho said. “Alexis put in a great ride when he just took off, but my horse can’t do that, I had to be patient and the horse did very well.”

Ferraris and O’Sullivan off the mark

“This is his specialist distance, the five furlongs at Happy Valley, nothing else suits him; this is his pet distance, so if we can pick up another one this season we’ll be happy,” Ferraris said.

The seven-year-old finished second first-up after trying to make all. Tonight, from the wide ally, apprentice Jerry Chau opted to settle outside the leader Apollos Bow before pouncing on the turn to score by a comfortable two lengths.

“It was a very good ride – I thought the horse would suit Jerry because he’s an on-pace runner. It was a bit of a concern when he couldn’t get across but he didn’t panic he just sat alongside of him and I think with the 10-pound difference, the other horse just couldn’t match him for speed,” the South African handler said.

Paul O’Sullivan was the other trainer to get off the mark for the season this evening and he did so with Mehboob in the Class 3 Kam Shan Handicap (1200m).

“He’s been very consistent that horse: when he first started you couldn’t stop him and now he’s learnt to jump, put his head down, settle, and roll into it,” O’Sullivan said.

Talented four-year-old Ares made his first start this season a winning one by taking section two of the Class 4 Shek Lei Pui Handicap (1200m) under a masterful front-running ride from Zac Purton.

“It was a good run, especially because we drew gate 10 and he had a big weight to carry, so I spoke to Zac (Purton) and said we’ll jump and just see, but if you’re faster than them then you can lead,” trainer Frankie Lor said.

And lead he did as the Australian ace bounced the Zacinto gelding straight to the lead and he was never headed from there, scoring by half a length from the fast-finishing Namjong Sings.

“He slowed the pace by himself, so it looked a little bit easy, especially mid-race,” Lor said.

The lightly raced New Zealand-bred was found to be lame after his last start and since then has been based at Conghua.

“After his last run he had a right hind leg issue, so I sent him to Conghua and he put on some weight there, though unfortunately he dropped a bit when he got back to Hong Kong,”

Badel’s night at Happy Valley went from frustration to satisfaction as the Frenchman put three consecutive runner-up efforts behind him with victory aboard Regency Master for trainer Danny Shum in section one of the Class 4 Shek Pik Handicap (1650m).

“I must say thank you to Danny (Shum) for his support because he is a nice horse,” Badel said. “The draw helped me a lot and the horse didn’t steal the race, he has done it pretty strongly and I hope he can repeat it – it was a great effort.”