Class gallopers to the fore at Tauranga trials 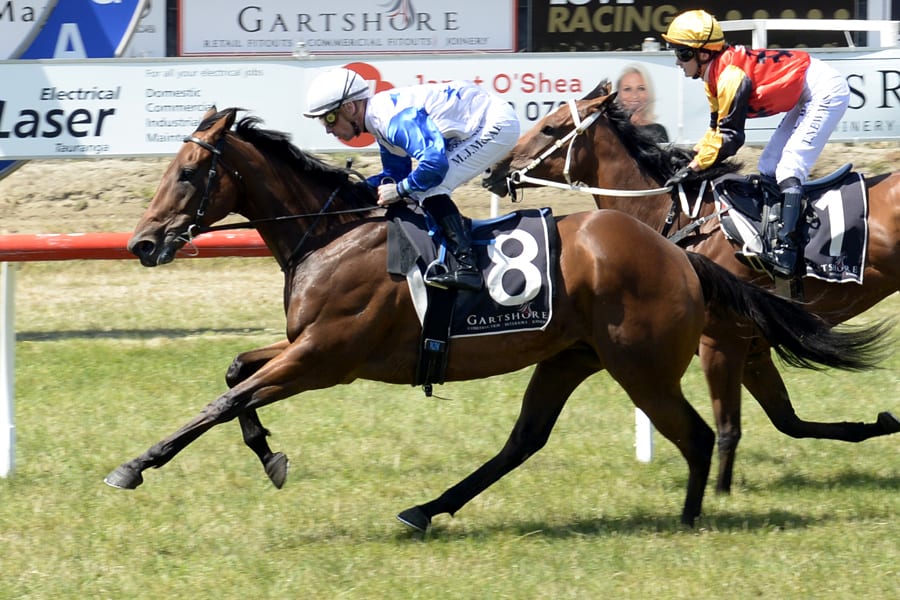 Group 1 winners Bostonian and Melody Belle showed they are on track for their upcoming Australian campaigns with forward showings in a special 1050m trial at Tauranga on Thursday. With the abandonment of the Taupo trials on Tuesday due to firm conditions, two open class heats were scheduled before the Tauranga racemeeting got underway.

The first heat featured both Melody Belle and Bostonian along with Group 3 Stewards Stakes (1200m) winner Sheezallmine who set up a true pace in front which had the field strung out during the early stages.

Bostonian and Melody Belle sat side by side just behind that speed with the pair travelling well within themselves throughout. Bostonian cruised home a length to the good of Sheezallmine with Melody Belle finishing off nicely back in third.

Trainer Jamie Richards was pleased with the hit out for the reigning New Zealand Horse of the Year Melody Belle, given she was racing without blinkers and was having just her second public appearance since returning from her Melbourne Spring campaign. “She trialled well. They went a decent clip and she was out of her comfort zone without the hood on,” Richards said. “She was there to do a bit today and treat it like a race to tighten her up and bring her on, so she’s got plenty of improvement to come.”

Richards confirmed the mare would fly to Australia this Sunday before her first task which will be the Group 1 Futurity Stakes (1400m) at Caulfield on February 22. “She goes into the Futurity first up on the 22nd,” he said. “We’ve then got time to give her either a jump out at Flemington or take her to Caulfield for a gallop beforehand to give her a look around there. “From there it’s then three weeks into the All Star Mile (March 14).”

Owner David Archer was also pleased with the performance of Bostonian who is also Australia bound. “He’s flying and it’s nice to have him back again,” Archer said. “Michael McNab rode a beautiful trial on him, it was a strong trial and looks good for the future. “It is straight to Sydney for him now.”

A dual Group 1 winner in Brisbane last winter, Bostonian is set to have his first-up run in the Group 1 Canterbury Stakes (1300m) at Randwick on March 7.

Run over 1200m, the second trial was taken out by the Ken and Bev Kelso-trained Supera who was having her first run since a float incident prevented her from taking her place in the Group 1 Zabeel Classic (2000m) at Ellerslie on Boxing Day.

Run at a more sedate pace, Supera came from midfield in the six horse field to win comfortably, holding out a late finish from Concert Hall with In A Twinkling, Quick Thinker and The Chosen One virtually in line just in behind the first two. “It was a nice trial and we’re happy with her and there is a lot of improvement to come,” Ken Kelso said. “Our plan was to trial her today and if we were happy with it then we will go to the Haunui weight-for-age down at Otaki (Group 1, 1600m).”

Co-trainer Andrew Forsman was happy with the efforts of both Quick Thinker and The Chosen One, with the pair expected to take plenty of benefit from the run. “He (Quick Thinker) needed it as he is very much on the way up,” he said. “He is probably going to miss racing here and will instead be heading to Sydney or Brisbane. “The Chosen One is coming up really nicely. He’s a pretty laidback horse who really isn’t going to show much in a 1200m trial but he’s on track for Otaki.”

Roger James was also delighted with Concert Hall who is set for a start in the Group 2 Joe McDonald Avondale Cup (2400m) at Ellerslie on February 15. “I thought it was a really good trial over 1200m,” James said. “She’s readying for the Avondale Cup and it’s going to be about seven weeks between runs so it was a big advantage to be able to come here today and give her a solid hit-out. “We’re going to go race by race but we might get to an Auckland Cup (Group 1, 3200m) with her.”