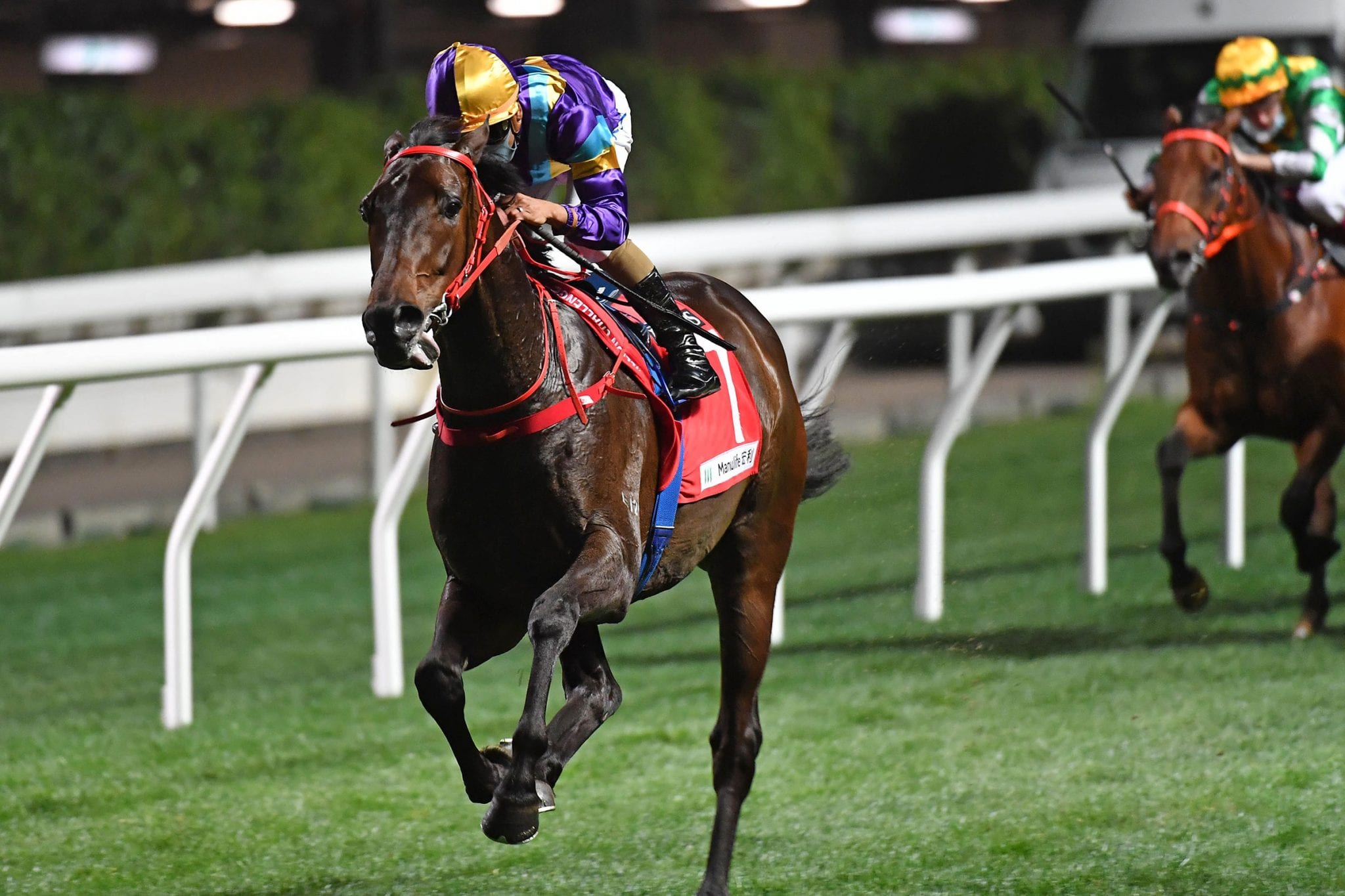 Danny Shum is considering an audacious tilt at the HK$24 million BMW Hong Kong Derby (2000m) in March with Charity Fun after the Irish import’s stunning victory in the Class 3 Hung To Handicap (2200m) at Happy Valley on Wednesday night (17 February).

Contesting only his second race in Hong Kong, Charity Fun surged to a four-length win over Xiang Bai Qi and Arrogant for Karis Teetan, prompting Shum to ponder making a late Derby entry for the son of War Command.

In the midst of another excellent season, Shum was impressed by the authority of the triumph after the lightly-raced gelding rattled over the final 400m in 22.7seconds.

“He is a good horse, even in his first start, he was amazing for the last 80 metres,” Shum said.

“You don’t see many Northern Hemisphere horses come here and run the 1650m in their first start like he did, he looked like a superstar.

“So, I was pretty comfortable coming to this race, even though it is a big step up from 1650 metres to 2200 metres. In Ireland he was racing over 2000 metres so I knew he could do it, there were some good trials at Sha Tin so it was all very good going into it, he is just a nice horse.

“The owner gave me one instruction and that was to win by as far as possible because he wants to get the rating up to enter into the Derby – that is the target.

“We have to see – we will need another race at Sha Tin to see what he does there to give me more confidence.

“I will sit back, talk with Karis and the owner and have a think about it, we know 2000 metres is no problem for him.

“The only problem would be going from a Happy Valley Class 3 to a race like the Derby. It is not easy so we need to think very carefully.”

Teetan was similarly taken by the performance.

“The first time, he surprised me by the way he finished off the race (when fourth to Wealthy Delight over 1650m at Happy Valley on 20 January),” he said.

“I knew there would be some improvement coming from that because I don’t think he was near ready first time but his ability made him run so well.

“We trialled him at Sha Tin and he trialled really nicely – today we had a perfect run but you could see how much he had improved.

“He was travelling nicely and when I put pressure on him, he responded nicely – he could be a nice little horse coming along.”

Formerly known as Pontchateau in Ireland, Charity Fun had only two starts before export, winning a 2000m maiden at Fairyhouse for Paddy Twomey in June, 2020.

John Size will consider backing up Scores Of Fun next week at Happy Valley to chase ultimate glory in the DBS x Manulife Million Challenge after the sprinter moved to within striking distance of claiming the HK$650,000 series first prize with narrow success in the first section of the Class 3 Hip Wo Handicap (1200m).

Collecting 15 points for the victory under Teetan, Scores Of Fun improved his overall tally to 57 – nine points shy of series leader Grateful Heart (66).

Size, whose double on Wednesday night left him only one win behind Caspar Fownes (43-42) in the trainers’ championship, said he would assess Scores Of Fun over the next few days.

“We’ll see how he pulls up,” Size said. “Anything’s a possibility.”

If Size sends the chestnut back to the city circuit after his slender win over Shouson, he mathematically could overtake Grateful Heart if he is successful next Wednesday, but that horse is also set to run next week and will bid for a fifth win for the season.

Igniting (40) vaulted to third in the series by winning the second section of the Hip Wo Handicap (1200m), meaning Grateful Heart and Scores Of Fun can’t be displaced from the top two – with the runner-up’s connections to earn HK$250,000 and third to pocket HK$100,000 for their owners.

Igniting was the final leg of Matthew Poon’s treble after he had earlier secured a race-to-race double with David Hall’s Red Brick Fighter in the third section of the Class 4 Mut Wah Handicap (1200m) and Dennis Yip’s Joy Avenue, who was heavily backed late before landing the Class 5 Wai Yip Handicap (1000m).

Zac Purton and Size revelled in a rare collaboration as Savaquin notched an emphatic victory in the Class 3 Hoi Yuen Handicap, the Savabeel’s gelding’s second successive triumph over 1650m at the city circuit.

“I think he will improve, he’s still very green.

“There are some more PPGs coming up, I’ve got some nice horses in the stable.”

“Jimmy kindly he let me have a trial on him and he gave me a nice feel in the trial. He just felt like there was plenty to offer. He’s a nice, robust type. He has a bit of scope,” the Irishman said.

“It wasn’t a very strong race but he’s a likeable type, though.

“He had a good blow after the race. He should improve off it.”

Tony Cruz maintained his strong mid-season impetus with Mercurial, who overcame a wide gate under Jerry Chau, to post a tough win in the second section of the Class 4 Mut Wah Handicap (1200m).