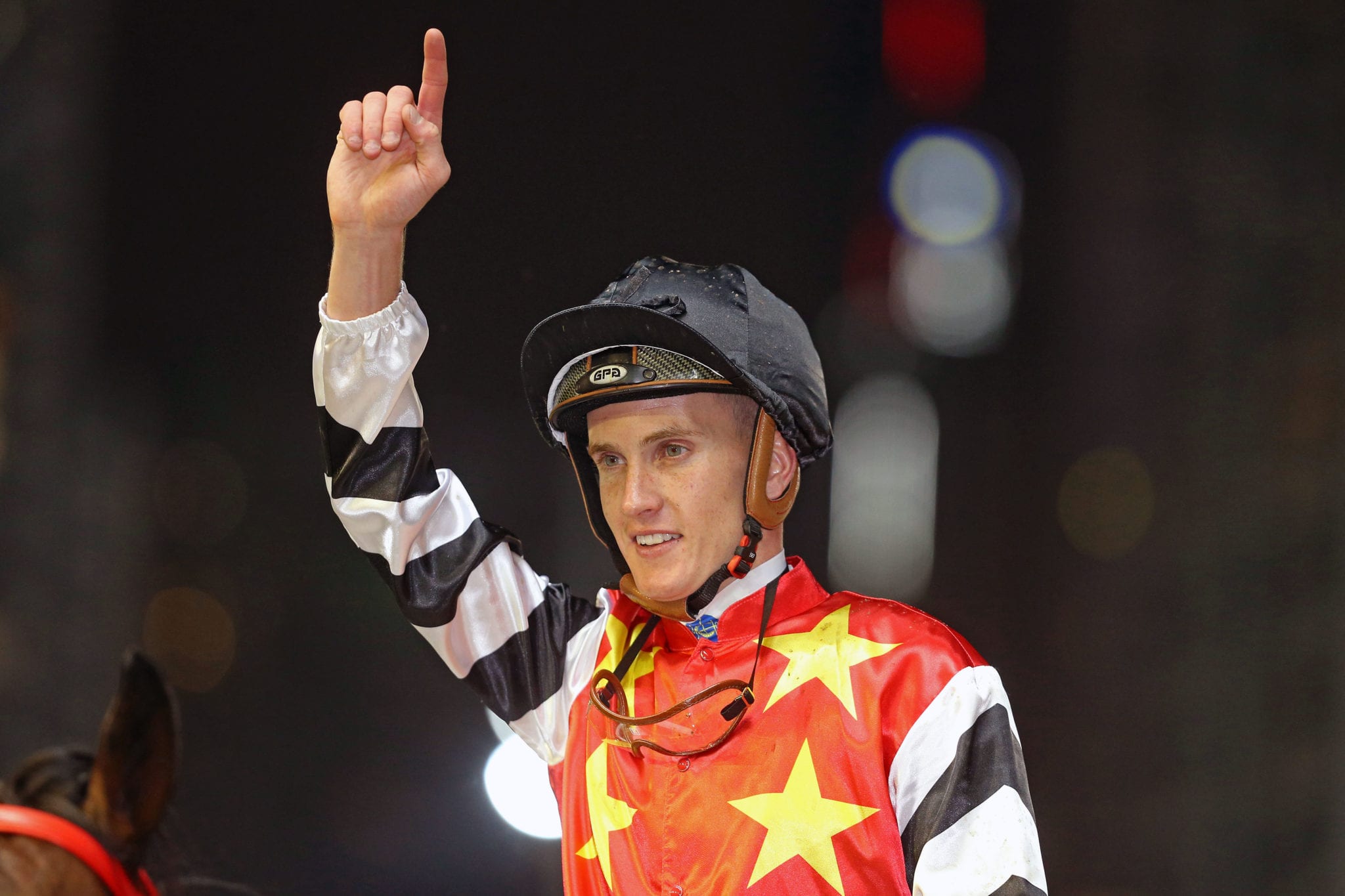 Chad Schofield is a man in form and in demand and he heads into today’s (22 April) nine-race card at Happy Valley as one of the only two jockeys with a full book of rides.

Schofield has bagged 11 wins from the last eight race meetings and currently sits only four victories away from equalling his personal best tally of 38 wins in a season. With 24 meetings left in the season, a new personal best is within sight.

“It’s been flowing along nicely – I have felt I’ve been getting better rides and better support and from that comes winners and from winners comes confidence,” Schofield said.

The remarkable stat though, is that of the jockeys ranked within the top nine, Schofield has had the least amount of rides, 330 in fact, but finds himself in fifth position in the jockeys’ championship, 13 wins clear of sixth place.

“We’re going well and hopefully it can continue right through to the end of the season,” Schofield said.

The highlight of his midweek book is his renewed association with the John Moore-trained Above (120lb) in the Class 3 Heather Handicap (2200m). With championship leading jockey Joao Moreira sidelined due to suspension, Moore will utilise the red-hot Schofield and the pair will break from gate four in a field of 10.

The Tavistock gelding cruised to a six-length win last start at Sha Tin over 2000m and will look for his second course and distance score at the Valley tomorrow night.

“His last win was super impressive – he’s a horse who seems to have taken a bit of time to hit his straps and mature and he looks like he’s in very good form off his last start win,” Schofield said.

A four-time winner now from 19 starts, the New Zealand-bred took 11 runs to break his Hong Kong maiden, but Moore credits his consistency this term to his development.

“He’s getting better with age, which is typical of the Tavistock breed. He’s doing everything right going into the race and staying is his game,” Moore said.

The Privately Purchased Griffin arrived in Hong Kong rated 52 but struggled to a career-low 33, but maturity has seen him kick on to a mark of 68.

“He started in Class 5 and in the beginning we thought we might have a few issues in respect to talent but that wasn’t to be, especially as you have to give the Tavistock breed time and with time he got better and better,” Moore said.

“He’s looking promising especially for the development of a nice stayer for the future because I think he will hold his own in a higher class than this.”

“He’s into Class 3 now which is always tough but 2200 (metres) is his distance, the further the better and with a nice galloping weight and off his last win you’d think he’d be hard to beat again,” Schofield said.

Against Above is stablemate Beauty Happy (119lb), but he also faces another stayer on the rise, the David Hall-trained London Hall (122lb) who is looking to notch a hat-trick of wins and his first score at the city circuit.

Matthew Chadwick will partner the five-year-old again and the pair will break from gate one.

“Hopefully the firmer ground will help us instead of Above but I don’t think Happy Valley will be a problem,” Chadwick said.

“We’ve drawn gate one, so it’s a nice gate to draw at Happy Valley and we’ll ride him accordingly – wherever he is happy and comfortable.”

The He’s Remarkable gelding is a four-time winner at Sha Tin.

“I’m not sure how the pace will unfold but it could be interesting – he’s a very easy going horse, so whatever happens shouldn’t really bother him,” Chadwick said.

Also on the card is the Caspar Fownes-trained Dancing Fighter who is looking to bounce back in the Class 3 Crocus Handicap (1200m). The Zoustar gelding struggled to eighth last time after missing the break, but this time will start from gate two in the field of 11.

“He’s a Class 2 horse – he’s definitely got some points in hand so hopefully we can just keep climbing the ratings slowly, he’ll carry a big weight (133lb) but from gate two he’s going to get his chance.”