Class has it for Lui and Ho in Valley dash 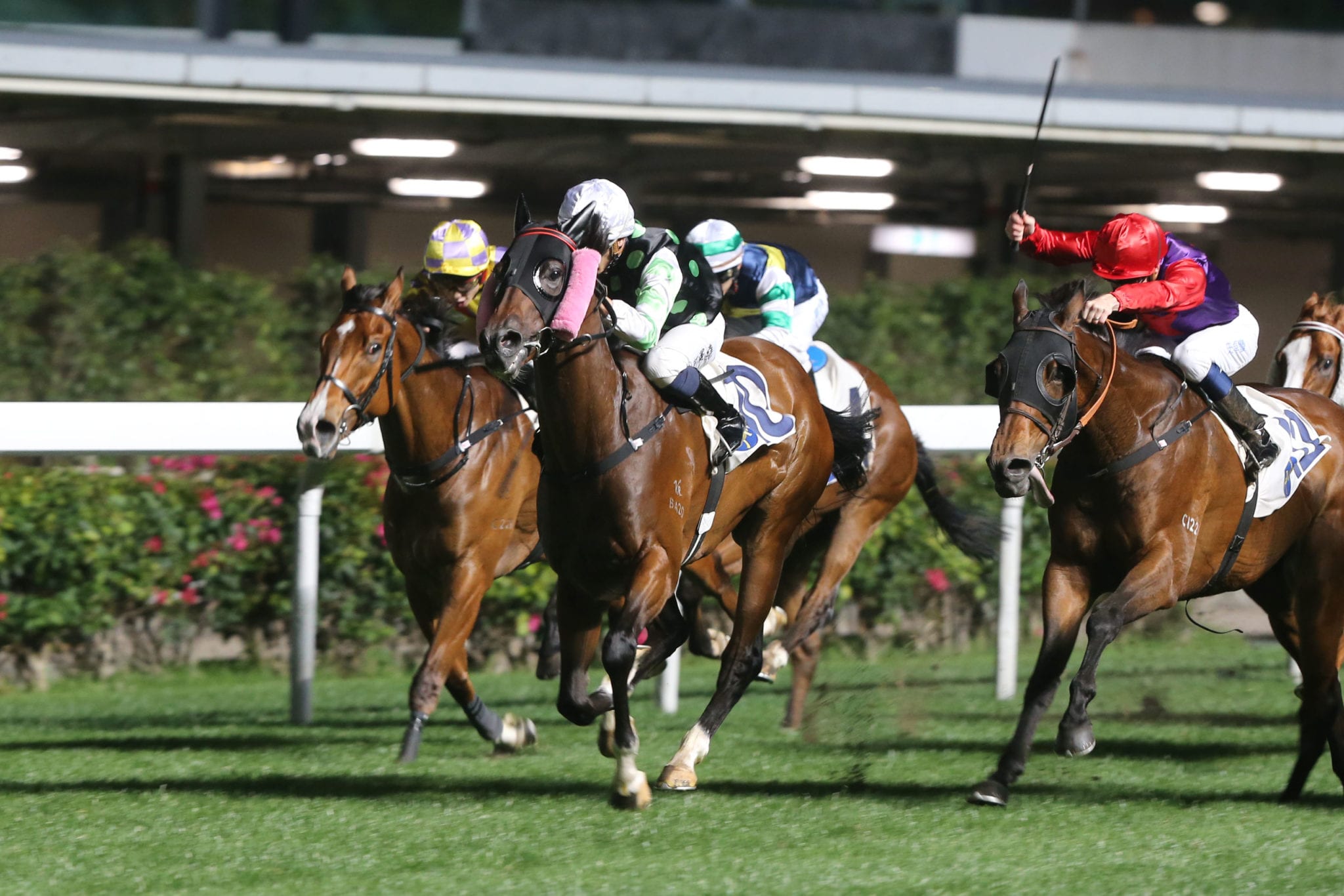 This Is Class (120lb) had to do it the hard way but the progressive sprinter had enough quality to maintain an upward curve with victory in a smoking Class 2 Hing Man Handicap (1000m) at Happy Valley on Wednesday (8 April).

Francis Lui’s galloper overcame a wide draw, a three-deep passage and 11 smart rivals to seal a fifth career win at his 11th start. The five-year-old quickened to the lead 200 metres out and fought hard to repel the late challengers, Loving A Boom (118lb) and Hong Kong Bet (125lb), by a neck and a short-head.

“It was a bit tougher than normal because we had barrier 10 and that’s not easy but luckily the pace wasn’t too fast in front,” jockey Vincent Ho said. “When he travelled, I just let him breathe and save as much energy as possible until the last bit.”

Lui had not been confident beforehand that This Is Class would be able to cope with the early speed for his first start at 1000m since January last year, having snared all four of his previous wins at 1200m. “I thought he’d handle the 1000 metres but I didn’t expect him to be that fast, especially as he was drawn 10,” the handler said. “The main dangers, I thought, were all on the inside, I expected them to be faster so I wasn’t confident – I thought maybe he was a place chance.”

Ho was astute enough to tap into the gelding’s 1200-metre strength through what turned out to be a tough run. “He can be on-pace all the time and he’s been running 1200 (metres) so back to 1000 (metres) he had enough in the tank, so even if we used a little bit more than normal I felt he would still finish off,” Ho said. “It’s a good effort from him, he did very well so hopefully he pulls up well and keeps his form.”

This Is Class has now won five and been second twice from his seven starts at Happy Valley and Lui is keen to continue at the downtown venue. “At the moment I’ll keep him here at Happy Valley but it depends on the programme – he’s shown he can win races here but if there’s no suitable race I’ll have to put him back to Sha Tin,” he said.

The So You Think gelding suffered a tendon injury after his second win, last May, but has done nothing but improve since his return to action in January. “He had a leg problem and I had to rest him for a long time but luckily he’s recovered. I think the way he won today shows that he still can improve further,” Lui added.

The John Moore-trained race favourite Stronger (130lb) endured a rough passage and was unable to find clear running at a key juncture in the straight. The 2.3 chance finished seventh.

Douglas Whyte bagged the 29th win of his rookie season as a trainer when Simply Fluke (120lb) broke his maiden at the 10th attempt in section two of the Class 4 Wan Tsui Handicap (1200m). It was the five-year-old’s first start for the handler following a stable transfer from Dennis Yip.

Joao Moreira overcame the widest gate, found the perfect midfield sit and then urged the 2.4 favourite to a neck success over Travel Datuk (120lb) who remained winless, and, for the eighth time in his 39-race Hong Kong career, had to settle for second.

“When the barrier draw came out and Simply Fluke drew gate 12 again that was a concern, especially as he hadn’t had the best of luck in a couple of his runs,” Whyte said. “I must say that the horse has really settled down – he’s been a bit of a handful but he’s settled down mentally and I was pretty confident with the work he’s been showing at home that he could reproduce that and he did.

“I think there’s still improvement in him,” the former 13-time champion jockey continued. “What he did today, I’ve learned more about him and I think I can assess him better. My belief is that after a run like that he’s going to enjoy and appreciate his morning training even more now because when a horse can win a race they gain confidence and he’s done it in a nice manner.”

Chad Schofield completed an accomplished double to maintain the good recent form that has seen him hit the mark at each of the last five race meetings.

And, for the second Wednesday night in a row, the jockey produced a peach of a front-running ride. This time he rolled the Jimmy Ting-trained Shadow Breaker to secure the lead in the Class 4 Yue Wan Handicap (1800m), set ideal fractions and maintained a strong gallop to the line to ensure the four-year-old a first win at the eighth attempt.

“He’s a horse that always works well but he’s only had a couple of runs for Jimmy and his racing had been quite disappointing in comparison to his work,” Schofield said. “Tonight we planned to be midfield with cover but he jumped really well – he was quite positive and eager to get on with it from the gate so I let him stride. I didn’t really back it off the whole way round, it was a strong gallop and to the horse’s credit he kept running.”

Schofield was on the mark again in race six, the Class 3 Hing Wah Handicap (1000m), thanks to the John Moore-trained Larson. The three-year-old broke his Hong Kong duck at the eighth attempt, having won two from two in Australia.

“It was a very good win – I only picked the ride up on Monday – but he came here an extremely fit horse and he was a pleasure to ride. He pinged the lids and once he got outside the leader he spat the bit out, relaxed, and when I pressed the button he went again,” Schofield said.

Ricky Yiu went to 47 wins at the top of the trainers’ premiership – one ahead of Lui – thanks to the determined run of Focus in the Class 4 Yiu Tung Handicap (1650m). Karis Teetan drove the Per Incanto four-year-old to hold the late thrust of runner-up Electric Lightning (118lb).

Blake Shinn ended five weeks without a win as he unleashed the David Ferraris-trained Bear Again on a powerful run to earn a length and a quarter success in the Oi Tung Handicap (1650m).

Good Shot (125lb) at odds of 45/1 surged late to run down the 2.4 favourite Super Alliances (123lb) in section one of the Class 4 Wan Tsui Handicap (1200m). The David Hall-trained five-year-old suffered a stress fracture to a cannon bone a year ago but opened his account under Matthew Chadwick at his second career start.

Champion jockey Zac Purton was on the mark aboard the Danny Shum-trained Young Legend in the Class 3 Hong Tung Handicap (1200m).