Blinkered Aramaayo puts rivals in the shade in Kranji Mile 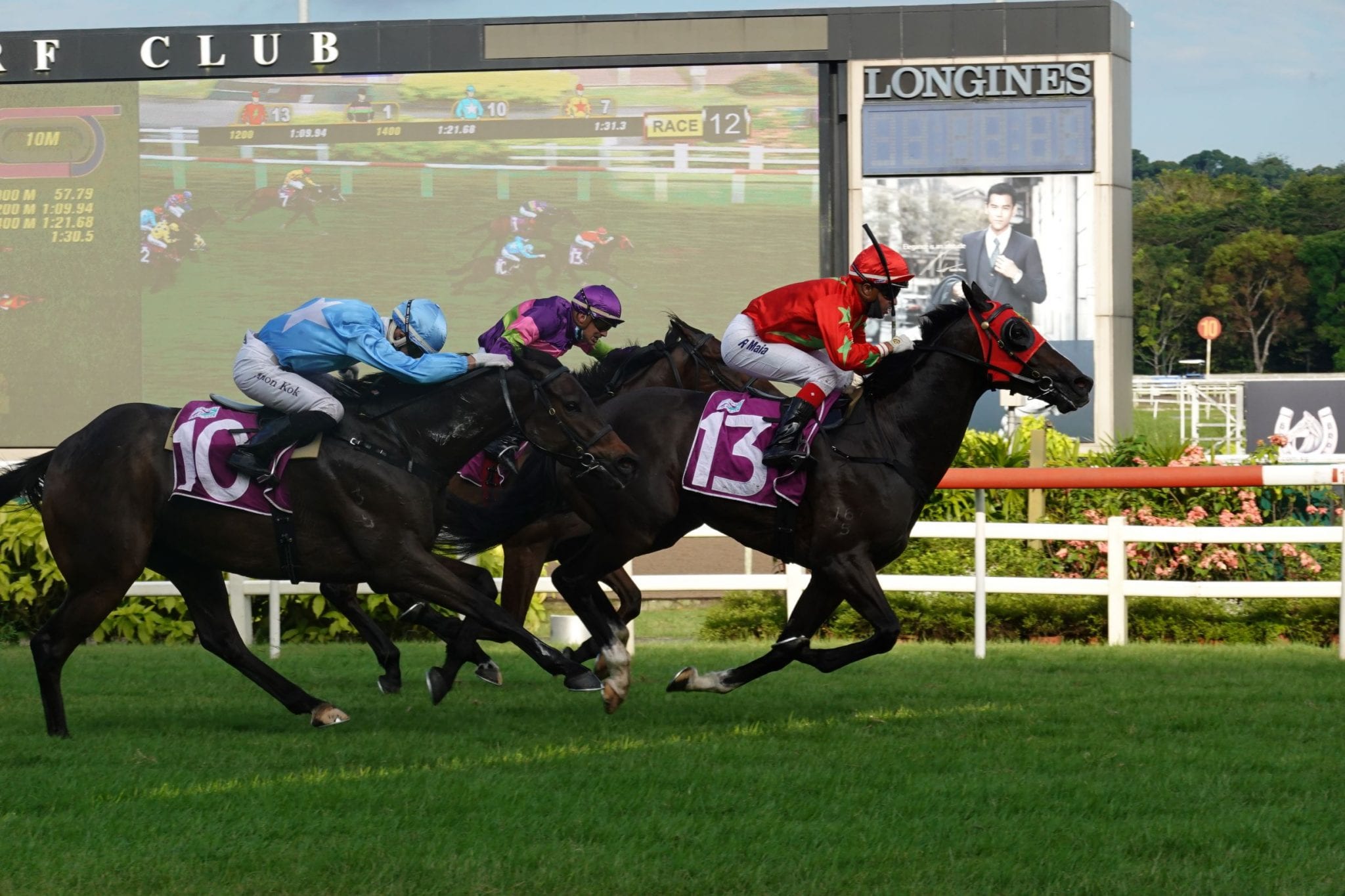 Former Godolphin galloper Aramaayo claimed his highest prize since he began racing in Singapore when he landed the $1 million Group 1 Kranji Mile (1600m) on Sunday.

First past the post only once at his previous six starts at Kranji, the Poet’s Voice five-year-old had, however, not been able to fully showcase his true Australian form that includes a Group 3 win (Spring Stakes over the same mile trip in Newcastle in 2018), most notably, his second-last run when a certainty beaten in the Group 2 Stewards’ Cup (1600m) back in March.

That day, he blundered at the start, conceding close to six to seven lengths, but still made up stacks of ground to run third, less than two lengths off the winner Siam Blue Vanda. That ‘nearly horse’ tag stuck on further when a flying third at his first-up run since the COVID-19 break in a Class 2 race over 1100m on July 26.

But that label finally ‘came unstuck’ when it mattered the most on Sunday, earning trainer Shane Baertschiger his third Group 1 success since taking over from his father Don in 2012, and first-time partner Ruan Maia, his first Group 1 hurrah in Singapore.

After being promoted to International Group 3 this year, the Kranji Mile was unfortunately brought back down a peg to domestic Group 1 status as part of the slew of changes brought about by COVID-19.

The owner, the Aramco Stable, is no stranger to such Group 1 heights either, having jointly celebrated their first with Baertschiger thanks to Aramco in the Lion City Cup (1200m) last season. The fanfare and hoopla that usually come with the territory on such big days of racing were sadly missing with the zero-crowd policy still enforced in line with the strict COVID-19 protocols on course.

Baertschiger and assistant-trainer Scott Bailey led Aramaayo in to the sound of maybe a few passing birds (crickets if it had been a night meeting), but the Australian handler was still basking in that new triumph in his own quiet way. “This is my third Group 1 win, but it definitely feels different from the first two (second one being I’m Incredible in last year’s Queen Elizabeth II Cup). There were no cheers, no photos and no prize presentation, but that’s the way it is now,” said Baertschiger.

“A Group 1 win is still a Group 1 win, and we will celebrate later. I knew this horse had peaked at the right time after he ran super on Polytrack first-up. “He won with blinkers in Australia and we’ve been saving them for the Kranji Mile. He’s a horse who stops when he hits the front too early. “He still tried to do it once he passed Countofmontecristo, but when Maia growled at him, that kept his mind on the job. “He’ll of course wear a set of blinkers in the Derby, which is in three weeks’ time. Fingers crossed, he’ll be a big runner again.”

The $500,000 Group 1 Singapore Derby (1800m) on September 6 had always been the race Aramaayo (known as Aramayo when prepared by top Sydney trainer James Cummings for two wins for the mighty Godolphin) was bought for as a four-year-old, even if the glamour race has undergone many changes this year, both in terms of conditions (now open to five-year-olds) and prizemoney.

It would now take a crowbar to prise Maia off Aramaayo’s back, more so when Baertschiger revealed he had eyed the Brazilian jockey off as his partner quite a while back. “I actually wanted Maia to ride Aramaayo in the Stewards’ Cup, that race he missed the start badly, but Maia had a booking already (On Line),” said the Australian handler who was incidentally sealing a first win with the Brazilian at their eighth try.

“Aramaayo was not confirmed for the Kranji Mile at first, but when some of the horses dropped out, he got up. When I asked Maia this time, he was okay to ride him.”

The two-time Macau champion jockey responded to the faith in his ability in the best possible way with a 10-out-of-10 ride, even resorting to his vocal cords to put the race to bed.

After dropping to the rear as instructed, Maia only started to improve the $33 chance from the 800m mark on the back of favourite and horse-to-beat Countofmontecristo (Louis-Philippe Beuzelin), when he commenced his run four wide on the outside. It was an inspired move because once Michael Clements’ No 1 runner went for home, Aramaayo had also cleared the other 14 runners and was left with only the hotshot to gun down.

That he did the moment Maia clicked him up for his run at the 300m. For a second, he looked so full of running that he would just sweep past Countofmontecristo and annihilate the field as he pleased, but that little quirk of thinking the job is done and dusted was evidently not quite straightened out.

He seemed to be levelling off with Countofmontecristo, who tried to muster another gear, but once Aramaayo was back on an even keel, the issue was put beyond doubt. Aramaayo had half-a-length to spare at the wire, not from Countofmontecristo, but from the latter’s stablemate Top Knight (Simon Kok Wei Hoong) who came from even further astern to pinch second place by a short head.

Countofmontecristo hung on gallantly for third place, three lengths clear of a bunched-up quartet made up of Sun Marshal (Ryan Munger), Mr Clint (A’Isisuhairi Kasim), Siam Blue Vanda (Juan Paul van der Merwe) and On Line (Shafrizal Saleh), finishing in that order. Aramaayo ran the 1600m on the Short Course in 1min 33.85secs, only 0.24 second outside the seven-year-old record of Super Ninetyseven.

A multiple-Group 1 winner back in Brazil and twice in Macau, Maia was in seventh heaven after the race. The 32-year-old from Parana had hit another milestone at his new workplace. “It’s very nice, the horse is very good and was always comfortable in the race, and got the job done. I’m very happy I won my first Group 1 race in Singapore, it means a lot to me,” said the 600-odd race winner, who will always be remembered as the jockey who flew in as a virtual unknown from Macau for one ride in April 2018, for a 100% strike rate in the Group 2 Chairman’s Trophy astride the Lee Freedman-trained Circuit Land.

“Shane told me to stay back as he’s a horse who runs on stronger that way. There was not too much pace, and I was able to follow a little closer in midfield. “I was lucky I had Countofmontecristo to follow into the race as he’s such a nice horse. In the last 600m, my horse quickened very nicely. “He came in too fast, though, as he stopped once he got to the front, but the blinkers improved him. They kept him going.”

While the feat of banking in the richest race on the Singapore calendar had still not sunk in, Baertschiger kept his wits about his two other runners, Preditor (Matthew Kellady, ninth) and I’m Incredible (Marc Lerner, 13th).

Without much surprise, it is the lacklustre run of his reigning Singapore Horse of the Year I’m Incredible that was the dampener. “Preditor (8yo) ran his usual honest race, but things are getting tougher for him. I’m Incredible hasn’t come up and I’ll give him a break for the rest of the year, and bring him back next season,” he said.

“The vets have gone over him and there’s nothing wrong with him. His trackwork is super strong, but he is racing flat. “He probably had a hard long second prep and he needs a three-month break.”

After Aramaayo’s second win from seven starts, his stakes earnings, which also includes place earnings from two seconds and two thirds, have leapt to around $680,000 for the Aramco Stable.