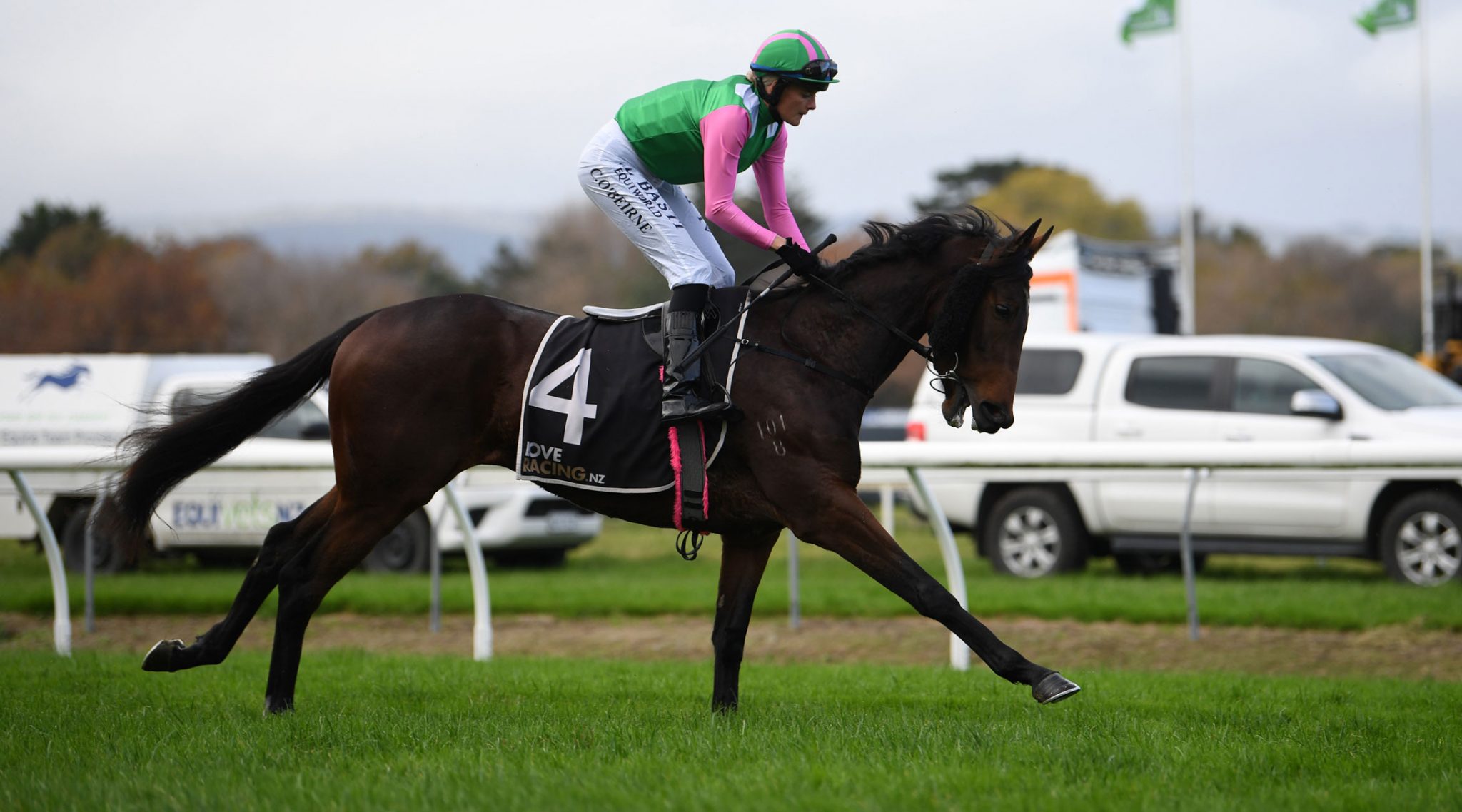 Smart juvenile Bellacontte is on track for Saturday’s Listed Courtesy Ford Ryder Stakes (1200m) at Otaki after warming up with a comfortable maiden victory at Hawke’s Bay last week.

The Chrissy Bambry-trained daughter of Burgundy had previously been stakes-placed in the Listed Castletown Stakes (1200m), with the patiently-handled galloper a last-minute addition to the 800m two-year-old race at Hawke’s Bay last Thursday.

“She was only nominated 10 minutes before nominations closed for the race at Hawke’s Bay, so it wasn’t in the initial plans,” Bambry said.

“She had missed a bit of work in the week leading up to it and I wasn’t 100 percent happy with her, so I backed off her.

“When I saw there were not a lot of nominations I thought it would be more like a trial for her and would fitten her up nicely for the Ryder.”

Bambry is confident the filly, who is raced by prominent Singapore-based owner Ben Kwok, has the attributes to get through the Otaki track which is currently rated a Heavy11.

“She has always been a really professional little filly and what she has shown me is that she can run on any sort of track and be competitive,” she said.

“I’m not worried too much if it continues to rain at Otaki. It will obviously be a heavy track and she is only a lightly framed filly so should skip through it alright.”

Bellacontte is one of two fillies sent to Bambry by Kwok as a yearling and has followed her usual pattern of educating youngsters through Mark and Lorraine Forbes’ Kiltannon Stables in Cambridge.

“Ben was more than happy to put her through my system the whole way through. Mark and Lorraine Forbes broke her in. They educate all my yearlings and gave her a jumpout through the gates and then she came down to me,” Bambry said.

“She has just been professional the whole way. She went shin sore on me a couple of times so we waited for her a little longer than we thought we would have to.”

Sarah Macnab, who has helped with much of the legwork, will again be in the saddle, with the lighter-framed senior rider also a plus.

“Bellaontte isn’t a very big filly so having a small, well-balanced jockey suits her,” Bambry said.

The Foxton trainer will assess how the filly performs and comes through Saturday’s run before planning too far ahead, but is hopeful of pushing on to early three-year-old stakes races, with a host of black-type options at both Wanganui (September 4) and Hawke’s Bay (September 11).

“Whether we head to Hastings or to Wanganui with her, she will let us know. She will have a couple of weeks with the water treadmill which will freshen her up like a spell,” Bambry said.

“The way she is progressing and pulling up from her races, I think as long as I look after her and give her those little freshen ups she should be alright to head towards the spring.”

Bellacontte was one of eight nominations for the Ryder Stakes on Tuesday, with the unbeaten Allan Sharrock trained pair Catsacharmer and Yeaboi looking hardest to beat.

Eleven time winner Deerfield will also step out on Saturday for Bambry at Otaki in an Open 1100m handicap, and thanks to the addition of quality galloper Tavi Mac, who is rated nine points superior to Bambry’s charge, Deerfield will enjoy a reprieve from the rigours of carrying topweight.

Meanwhile, Bambry still has plenty to follow across the Tasman, with her former charge Lord Bouzeron, in whom her parents Tony and Judith hold a share, continuing to run credibly for South Australian trainer Michael Hickmott.

“Mum and Dad still have a 10 percent share and it was a tough effort on Saturday to run second on a heavy track carrying 60 kilos. He is a tough little bugger and Bellacontte reminds me a lot of him, she has since she was a yearling so hopefully she can live up to that status,” Bambry said.

Also heading across the Tasman is an impressive recent trial winner by Belardo out of Maneo Invictus, with Bambry keen to see the gelding perform well for syndicator Spicer Thoroughbreds.

“Brad Spicer bought him and he is going to Lindsey Smith. He is a nice athletic horse that has shown a lot from the start. I really rate him and think he will do well. Belardo had another winner on the weekend in Australia, so they are starting to hit their straps.”